I keep drawing heads swallowing smaller heads. It’s actually even a notation in my weekly journal, constantly on the to-do list…”draw more heads smaller” is what it says. And yet I keep drawing them the same, not fitting more than one or two on the page (probably a function of page size…I should totally go full size). I’m not sure what it means. People always want me to explain my work, and when they realize that I was really tired last night and I made the mistake of having a glass of wine with dinner instead of waiting until really late, and so I almost fell asleep on the couch at 9:30 PM, like a normal person, but then I realized what was going on and got up and got my act together and did something artistic, and somehow that turned into being awake enough to draw another head-swallowing moment, well they give me that look that makes me wonder how crazy I really am. I’m sure it’s some psychological thing where I feel like my job and life are swallowing what I really want to be doing or something like that. Not so difficult to figure out.

I’m not really crazy. Just a bit. Just praying here to the internet/computer gods that I can keep the connection long enough to post this. New computer card arrives today. Let’s hope it solves the problem. Here’s the drawing, not done.

I don’t know where it’s going. I just wanted to draw. So I did. That’s a little less than an hour’s worth of pen on paper. It felt nice. I should do more of it.

It’s really only because I couldn’t get the internet to function at all, so I couldn’t grade anything. Frustrating. I need to grade stuff.

I did have quilt class last night. I finished outlining the blue flowers, sewed the rhino horns with split stitch…harder than you might think over wool…and then palestrina knots for the bird’s legs.

It never looks like much for 2 hours of work. There will be more of it at gaming tonight. I’m on the July blocks now. I think.

In between the class and the drawing, I did sort the fabrics for the next quilt, so I can start ironing this weekend. Here’s in process… 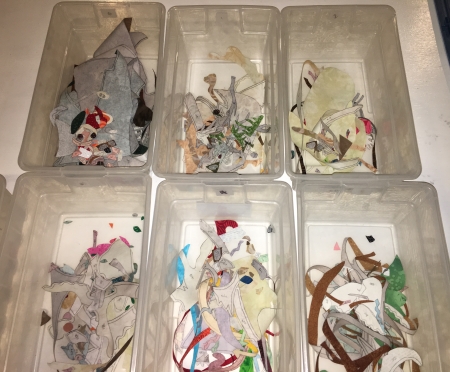 This is not a hugely complicated quilt, so it didn’t take long. If I weren’t so tired (why am I so tired???), I would’ve started ironing it together, but that would’ve meant standing up. I didn’t do a lot of standing or walking yesterday…I was in a training, which meant my classroom went to hell in a handbasket. I love trainings. Actually, we planned for most of it, so that was good, because we needed to do that. We need to do more, of course, always more, but we’re closer than we were.

So this weekend is full of grading and hopefully ironing. And sleeping in tomorrow. I really like to sleep in. I’m such a shitty sleeper, it’s kind of ironic that I get up in the morning and I’m already thinking about when I might be able to put the pillow over my head and ignore the alarm clock.

I’m not even trying to play music right now. It would break the computer. It means I have to come up with a title with no support system. Hmmm.