This week is tired. I’m pretty sure I thought yesterday was Wednesday, which would make today Thursday, but you know it’s not. Tuesday inserted itself rudely back into the week, refusing to be ignored. Damn you, Tuesday. So now it’s Wednesday and there are two more meetings today which makes it long and tiring. Plus, let’s be completely honest here, I’ve stayed up too late two nights (or more) in a row, trying to get the Wonder Under traced. That said, even going to bed late, I find it hard to fall asleep…my brain is racing, stressed, on overdrive, wants to read my book, wants to work on the quilt, wants to do anything but slow down and relax and rest and rejuvenate. Bad brain.

Yesterday’s afterschool meeting was about National Board certification…something I’ve been considering. I need to get my district to pay for it, though. I love that the only professional development that might actually be useful for me is something I have to pay for myself…all the stuff they force me to go to is mostly useless. Sigh. So it was an interesting meeting…we’ll see if I decide to do that. It might be best to wait a year, until I don’t have to work three jobs to pay for college. Being one kid down in that respect is not necessarily helpful…the boychild had more grant money, so his payment was pretty small…in fact, we haven’t paid anything this year out of pocket…it all came out of the college money we started saving when he was a baby. That was nice. Maybe the girlchild’s will be similar. Going into the 5th year of college payments is hard…there’s nothing left. (Who am I kidding? There was nothing left after the second year.)

Then I came home and soaked my very-much-not-infected (well, at the moment) foot. They still have me on antibiotics until the culture comes back…one of the wonders of diabetes…the fear of foot injuries. I was multi-tasking…reading my book (that’s due in 3 days) while soaking. Of course. And then! I’m a character in the book!

So far, I’m kind of a lame character…but I’ll take it. Might be a true representation of the Nida character right there in the second-to-last sentence.

Then right back to this, because when I stopped Monday night, there were only about 230 pieces to go. And that’s doable in one night.

Well, it’s probably more doable when you start earlier, because it was well after midnight when I was done. Piece 1000 is in there, but honestly, last night, there were at least 3 numbers that were used twice and at least 4 pieces that weren’t numbered, so who knows what I’m really at. Somewhere AROUND 1000. 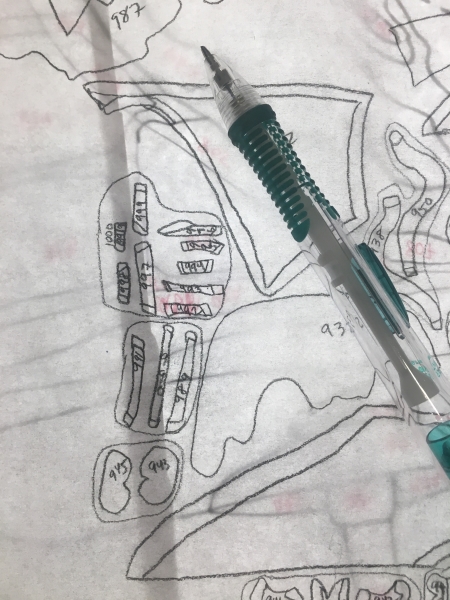 It took about 10 1/2 hours…not bad…almost exactly an hour per 100 pieces. I was on a roll! That’s 10 episodes of Agents of SHIELD too. I think. I must have watched something else too, because I still have quite a few episodes in there.

I spread out all the Wonder Under…it’s about 3 1/2 yards’ worth. Covers the light table and more… 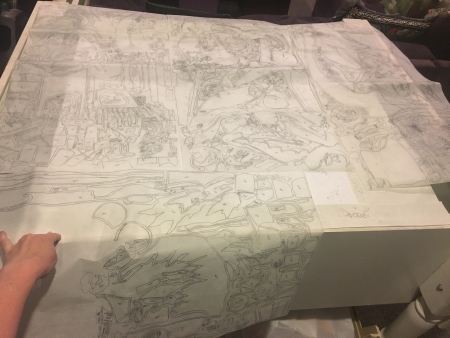 Next comes about 7 hours or so of sitting on the couch and cutting them apart. Oh yeah, I never found two numbers on the drawing…so either they were hiding completely (sometimes I number illogically) or they never existed. The human brain is a messed-up device. Too much water damage.

Meeting this morning with the science department; after school, with any parents who want to see our sex ed program before we start teaching it. Yes! It’s almost THAT time of year. Oh boy. Seriously, they might wake up and pay attention…I’d be good with that.

If you want a copy of the catalog for the Things That Matter traveling exhibit, it’s available now on Amazon right here. All the quilt statements are in there too, which is nice. I still haven’t had a chance to read them all.

With that, I’m going to go deal with some other things that matter…