Yeah, I’m up early. I was already awake…trying to remind myself in my sleep to wear my anti-gun-violence T-shirt today for Columbine. Things we remember: Reagan being shot, Columbine, 9/11. Fun stuff. Right eye is twitching. Yesterday was calmer. Today will be frenetic, because things are due to the teacher and you didn’t tell us! I did. You aren’t giving us enough time! Yes I am. Next week will be a little more chill. But we’ll be talking about what war does to a country, to a national park, to be specific, and that’s walking a fine line sometimes. Too many of my students have direct experience with guns and bombs falling. I think about that and I’m glad I grew up in sunny Southern California, where the only guns are in the workplace and at school. Whoops! No seriously, my growing-up time was also pretty chill. Same stupid drama you always see in middle and high school, but also dances and parades and homework and ditching school and dressing up for Halloween and all that stuff. No war, except the cold one. No weapons, except the nuclear ones.

The quilt I’m working on now isn’t about guns or even women’s rights or climate change or anything else political. It’s personal. I need a little mental space to work on it…it’s easier to see each piece as this particular shape than to try to tag it on social media with what’s important. What’s important? Across the board, how we treat people. All people…whether we’re trying to work with them in a group or teach them or love them or be with them or just stand in line with them in the grocery store. Or like that guy who was trying to drive up my ass the other day because he wanted to pass the truck in the other lane and he was in the wrong lane and I wasn’t going fast enough for him, so all I could see was the grill of his pickup truck and his middle finger thrusting at me in my rearview mirror. Really? I was doing 67 mph in an only lane that was exiting that freeway. Not fast enough. I wonder about his life that he thought that was an appropriate move. I hate that those guys sit in my chest and make all the feels.

I graded more yesterday. I’m trying to get caught up. It’s frustrating though, because then some kid emails me, completely confused about what I graded, but he never turned it in. So that’s a zero, sweetheart. I can’t (won’t) grade what you don’t turn in.

I had quilt class last night, which is just the two of us most times now…which is fine. I didn’t want to haul all the stuff to trace Wonder Under, so I just took the box of things that need sewing down. I forgot half my thread, but this is my quilt teacher, so she has that stuff. We like never run out of thread…the spools last seven thousand years when you’re doing applique…it’s such short strands. Even all the bindings I’ve sewn down…I think only the black and the dark blue thread are anywhere near empty…and they’re still NOT empty. When I die, it will be spools of thread and art exhibit announcements…and the FABRIC that drive my children bonkers. I’m OK with that. Maybe by then, I’ll be a mural painter and it will be my spray paint collection in the garage instead.

I got the lion’s body down, the two rectangles in the background, the body of whatever that gray animal is, and now I’m working on the tree. Still lots to do. Not even sure where the wool thread is for that blue hut.

This is Mind the Gap, a show I will never see in person, unfortunately, due to the stupid hours. It closes today, I think…pick up is next week. Good friends drive down and photograph the show for you. Mine is on the right…there’s more pictures, but I didn’t have the energy to download them all yesterday. I partnered with James Watts, whose kokeshi doll is being stared down by my angry earth mother. 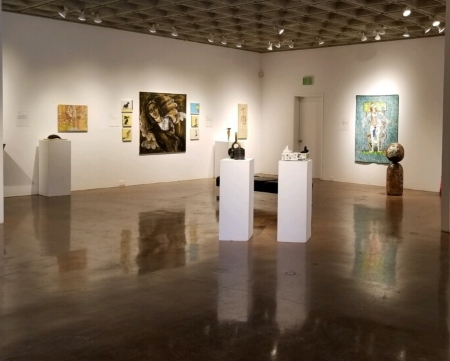 There are some big rug pieces in there that take up lots of space on the first yard of Wonder Under. There are three figures on this quilt…so there will be lots of flesh tones. The fireplace is gray stone. Something to think about. The background will have two colors: floor and wall. How will I get the contrast I usually love? Well I need to consider that. Red wall? Dark brown wood floor? Dark gray stones in the fireplace? We’ll see. Complicated for sure. It’ll be at least 10 hours of tracing, probably more like 12. So I won’t be done with that until the end of next week probably. Good to have goals.

Time is tight. 39 days. Will I be making the other one also? What…am I nuts? Sigh. Yes. Yes I am. It may not be possible. I may have to reconsider. I may have to work harder.

This was at school. I have no idea why. 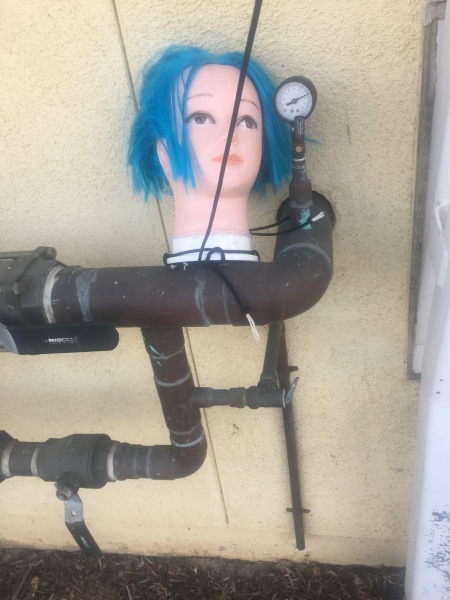