Last night, a bunch of stuff happened. I felt sick, so I went to bed a bit early without posting a picture of anything on Instagram (not the end of the world). I drew a bit, leftovers from the loooong staff meeting I survived. I finished cutting out all the Wonder Under for the commission quilt. I tried to clean up in the studio. I was going to sort Wonder Under pieces too, but my stomach did not agree. I love it when random bodily organs decide to sabotage the night. I’m arguing with it, please why can’t you just get along? We don’t have to do this. Ugh. Nausea sucks. Always.

Whatever it was, it’s still with me this morning. Fun stuff. Plus a parent meeting and duty again. Mornings are never my strong point. Wait. I said at the staff meeting yesterday that afternoons were never my strong point. Also true. I really am a night owl. I can function in the morning, but usually by myself and not talking for a goodly portion of it. Until some part of the first cup of tea gets in me.

I tried grading stuff yesterday evening, but it was making me fall asleep, so I quit. I made dinner and then this guy joined me on the couch for a while…

I started a drawing during the staff meeting because drawing helps me focus on stuff that’s kinda boring. Although I’m still not sure what the point of the meeting was…for us to do something we already do? And the video…I don’t know what it had to do with what we were doing? Sigh. Whatever. Last night I got a work email chastising a group of us for not going to a training on Wednesday for stuff we’ve already been trained on. I’m annoyed by that. I don’t need someone to explain the new standards to me right now. Thanks.

So I started the drawing, but then we had planning time, so we used it…and I finished the drawing at home…on the couch…

I guess you know how I feel about staff meetings now. That big mouth is kinda scary. I kind of want to do a larger drawing with more and more mouths getting bigger and trying to swallow the smaller ones.

I finished the Wonder Under cutting…just under 5 hours (pretty damn good guess, eh?). 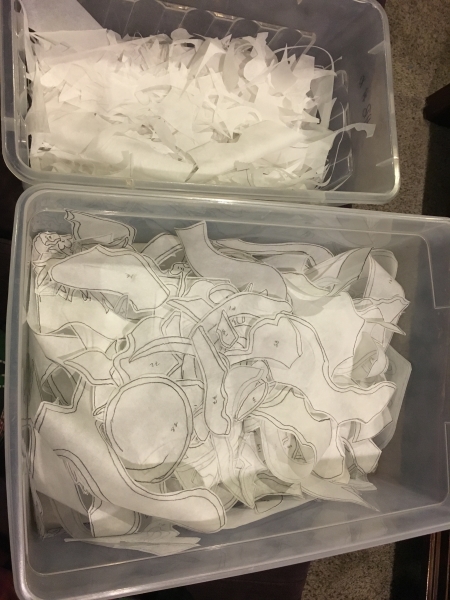 I need to sort them. I was going to do it last night, but that stomach thing. It’ll take less than an hour to sort them, and then I can start ironing to fabric! Yay! I love that part! Although it’s more standing…and it will take longer, probably more like the 9 hours or so that it took me to trace the quilt…maybe a little more than that. So I’ll be doing that hopefully starting tonight…then I have a hike, a meeting, and gaming (3 nights of activities)…so not very much of that until the weekend, I think. So probably I’ll finish ironing to fabric sometime next week. ALTHOUGH…I have Monday off from work. I’ll have to grade some and probably walk some dogs (like this one sleeping with her ball)…

And I’d like to plant some stuff and there’s floors and bathrooms to clean (oooh exciting) and could I Please Please Please remember to go sit on the deck and draw? Yeah? Totally. I should do that.

This was part of the cleaning last night…I was looking for bins to sort Wonder Under into, and all the fabrics from the last quilt are still there (I leave them there until I hit this stage on the next quilt), plus a few I bought since then, plus the ones the boychild gave me for Christmas. All sorted by color. So they need to be put away before I can start. Not hard.

Just takes a bit of time.

The girlchild left last night (which was actually this morning) on an overnight into the rainforest. They drove for a while and then hiked an hour and a half into the campsite with tents and sleeping bags (now you can see why her packing was such a pain! Imagine hauling all your camping stuff 11,000 miles). I haven’t heard from her for a while, so I suspect even the limited contact we had is unavailable where she is now. She’s there for one night and then home the next evening, which means I won’t hear from her until Thursday morning at the earliest. Yeah that part is hard. Funny, though. I always keep her and her brother in the back of my mind when they’re away at school. It’s hard not to, but I don’t worry. I know they’re OK. But that’s harder when she’s this far away. I’m sure I’ll get used to it (will I? In just 3 1/2 months?). She’s talking about doing a rural independent study project, which could mean 3 weeks or more of no contact. So I guess I’m glad I’ve had some contact with her at the beginning, because I’m pretty sure it won’t stay that way. It’s interesting what the internet has done for us in terms of keeping track of people you care about…it’s too easy to always be in contact, I guess. There’s pros and cons to that.

Anyway, parent meeting, the last day of labs (oh hallelujah, because I might kill someone soon), hopefully an improved stomach, and fabric waiting at the end of the day. Plus I don’t have to cook tonight. Always a plus.