I’ve started trying to train myself to get up earlier, as the beginning of the new school year veers dangerously close to my summer brain. I have a ton of stuff to get done today, and lying around half asleep is not helpful…although standing around half asleep is pretty painful. Normally I would try to avoid school until the day I was actually required to go back, but because the district-wide conference is going to be AT my school and IN my classroom, I have to go back today to figure out how fucked up my room is after summer school was in there. I have stuff here at home that has to get into my classroom. I have stuff there that has to be hidden or moved. I’m going to try to organize stuff a little bit, but that’s hard to do when you know total strangers will be in your room all day and they might not respect your space as much as you’d like them to.

I still need to finish copyediting and cleaning the girlchild’s room out, and I’m really really trying to get the ironing done. My friend has gone back to her life in Northern California, although we did get out and about yesterday before she left…plus now I have a fridge full of Indian food…yum.

First, a gratuitous picture of Kitten with her favorite petting instrument. 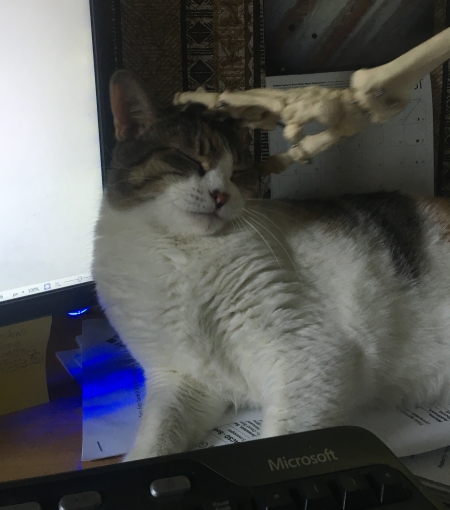 My friend stayed at the Sycuan Golf Resort and what I loved about their free water was that it didn’t just say WATER…it’s MY WATER. Interesting thought living here in California, where water is sacred and Nestle owns a shitload of it. OWNS water. Sigh. 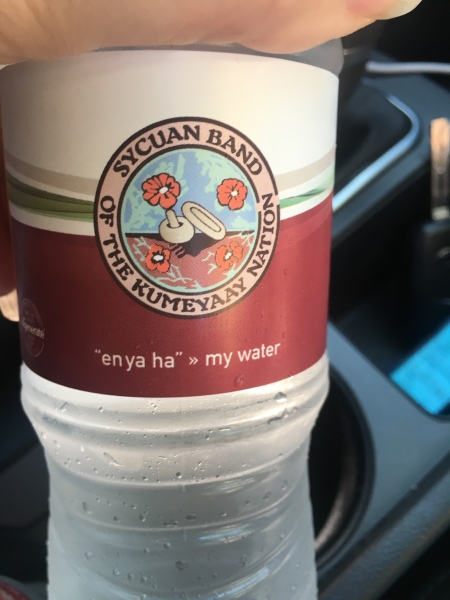 We headed out to Balboa Park…we didn’t have a ton of time, but we wandered around…like you do. 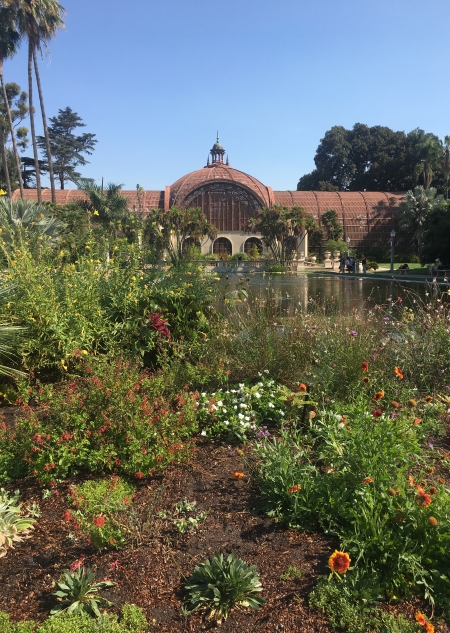 It was bloody hot there too. 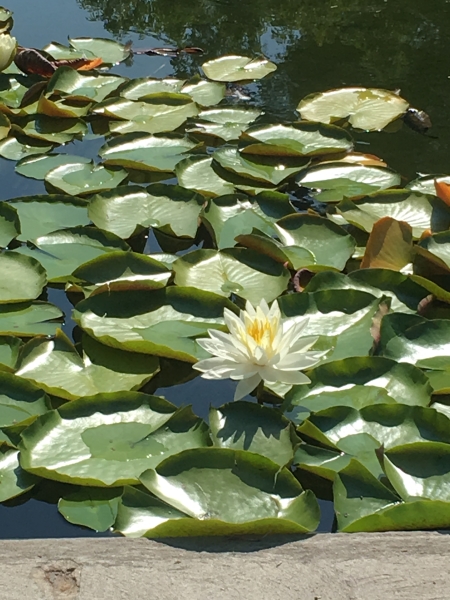 We went to the Timken Museum to see my friend Bhavna Mehta’s newest work, Leela, who is made completely out of paper. 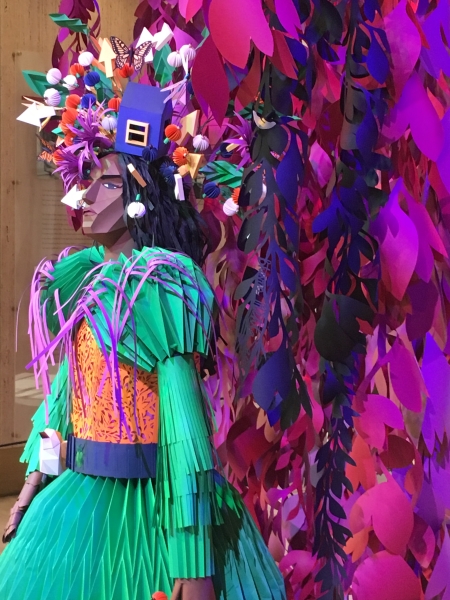 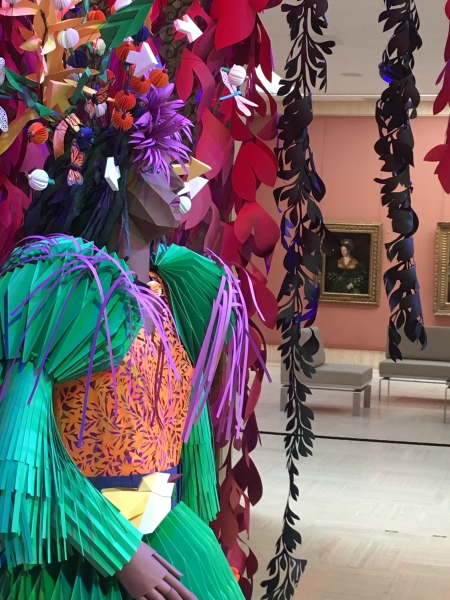 There’s a lot of amazing construction and vivid color going on in this piece. I love that it’s not a direct representation of the painting. Bhavna talks more about her interpretations in the catalog, also available at the museum. I really enjoyed taking all of it in and thinking about how we portrayed women in the past and how we can portray them now. Leela has power in her stance.

Of course, I lost my friend to the docent at one point… 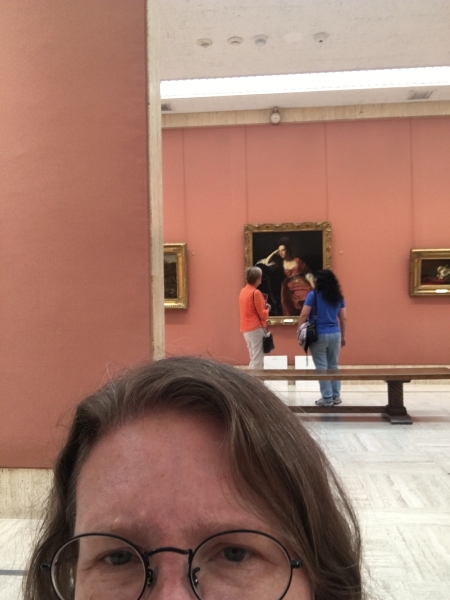 Take an artist to an art museum day. I tolerate docents. They are nice people. I just like to figure stuff out more than be told their version of it. This was the second docent that tried to track us down. My friend likes docents more than I do.

So the rest of the day was sort of kamikazing around to meet with people and sew…I finished the Palestrina knots around the hippo, but then once again forgot to photograph or bring the rest of the hippo instructions from March (they’re in the notebook!), so I couldn’t finish the June blocks. Tonight! 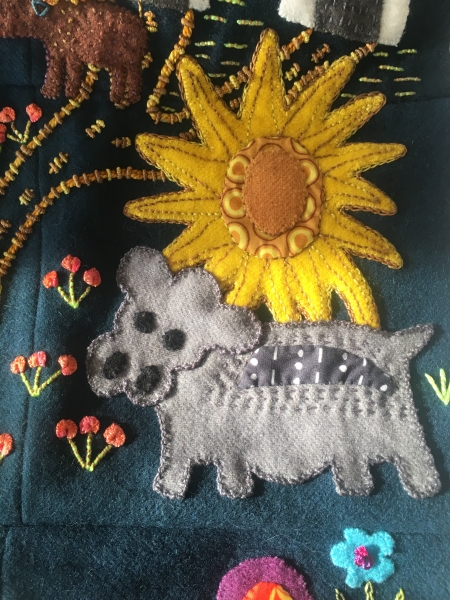 So I started working on July’s blocks, which are the three in the middle. I did the stems and leaves, and then started on the blue flowers. 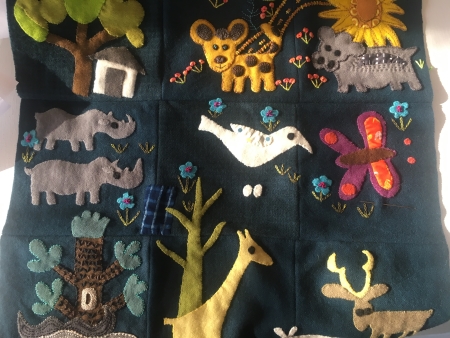 It’ll be a while before I get July done. Then August is the one with the tree and the two down at the bottom right. I have September sewn down and October cut out, but I think it will be easier to embellish September first before I sew October into the mess, because then I think I’m sewing most of the quilt together. Because working on wool things when it is 100 degrees out makes sense. And once it gets big, it’s hard to cart around to gaming or anywhere else with limited table space. The piece I’m working on here is already a bit too big.

Remember how I was going to be done with embellishing the circles on the bird quilt by the end of July? Didn’t happen. I have been working on the art quilt nonstop. Plus did I quilt the other wool quilt that was on my list at the beginning of the summer? Fuck no, I didn’t. I got one unfinished non-art quilt done this summer. Better than nothing.

So I started ironing around 10 PM, after my evening meeting and eating dinner. I had a couple of graffiti walls to put together. 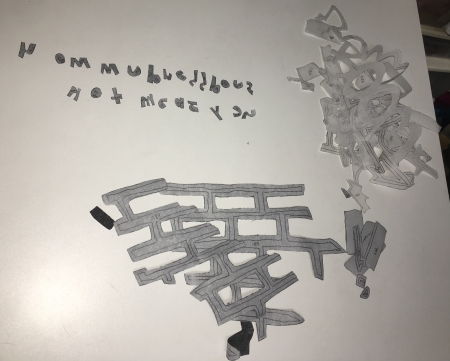 Not too complicated. Lots of pieces, but pretty easy to put together. The hardest part was cutting out all the holes in the little letters. 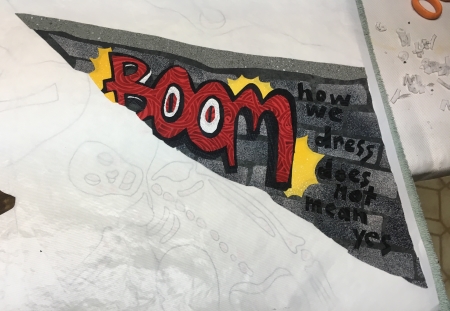 The other wall, plus a talk bubble for the figure below the wall. 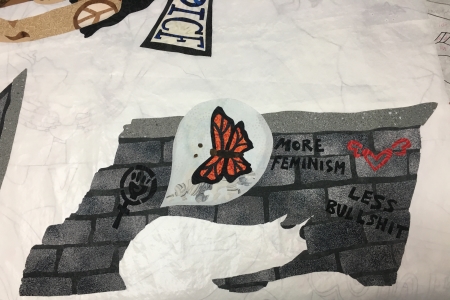 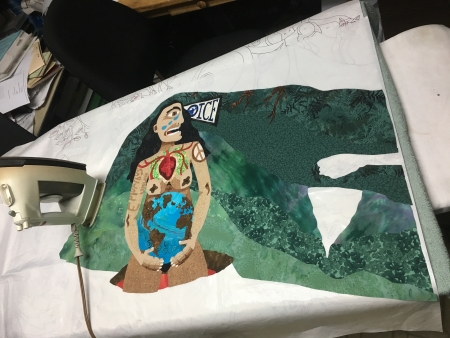 Ironed her into her space…then the walls to the sides. Obviously, I have two things that need to go into the hill where the big white spots are. The big piece I showed before will get ironed to the bottom of this. 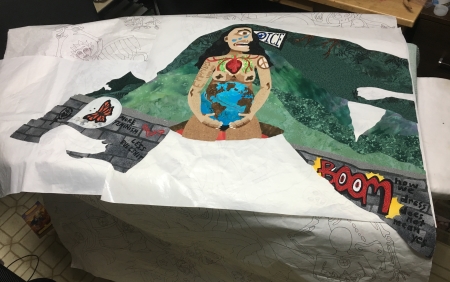 This is not the first time I’ve put a woman holding the Earth into one of my quilts. 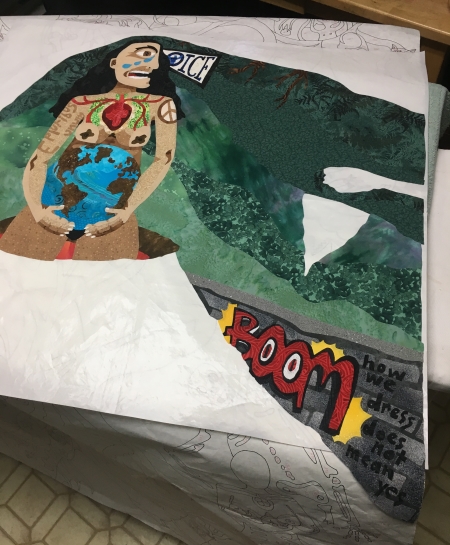 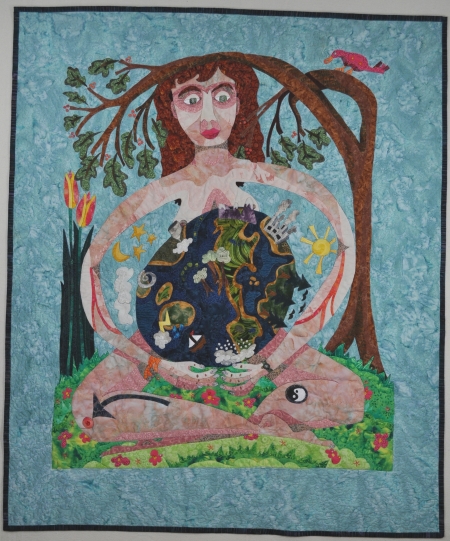 So this new woman is about immigration though…I really feel like we need to look at the world as one place for all the people. Trying to build walls or claim that there is One Right Way to get into this country is kind of idiotic. Read the history of immigration here in the US and then realize that your ancestors mostly likely immigrated here for similar reasons to those trying to get here now. Why is their plight not as important as your ancestors’? Anyway…so she holds the world in her hands. 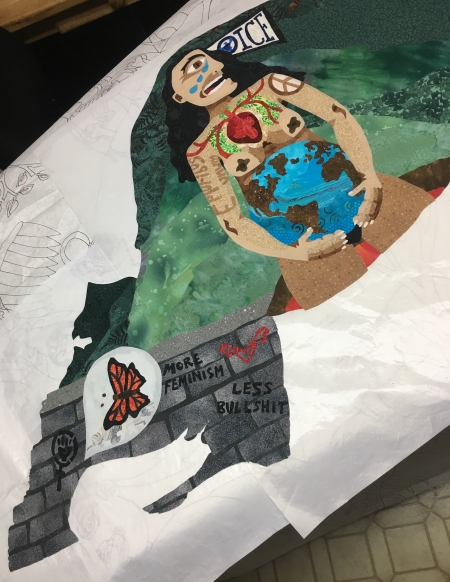 I have about 15 and a half hours of ironing done and I am finally past the halfway mark. I’m in the mid-1100s. So there’s another 700+ pieces to go…probably 9 hours of ironing, easily.

I’m hoping to get the school stuff and bedroom stuff done early enough that I can iron for a few hours this afternoon before gaming. Sometimes gaming is long and I don’t get much done afterwards…but maybe I will get some done tonight. Then the girlchild arrives tomorrow morning, so I can’t predict what will happen. Well, except for squealing and very excited dogs. That will definitely happen.