No jury duty today. The last day of worrying about it. Glad it’s done. Maybe I’ll be more chill about it the next time the feds tie up most of my summer with not being able to schedule anything. Which is why my foot is going under the knife on Monday! First day I could schedule it. It’s OK…some weirdo cyst that’s been causing issues for two years now will hopefully finally die a horrible death. And truly hopefully, a quick recovery with no restrictions on standing or walking.

School is officially looming. Three emails yesterday from the principal, one about our rooster mascot, which something apparently finally caught and killed. Sad…I think every teacher on campus has a picture of him lurking in the lunch area or in the parking lot. I do, but I can’t be bothered to go find it. I have video of him serenading me as well. Like he did.

So the days to get shit done are counting down. With that in mind, I fully met the goal from yesterday and did 6 1/2 hours of cutting shit out. I’m proud of myself.

First, though, in true GISHness, I painted a portrait that I can’t show you of Jensen Ackles using Skittles as paint.

Note to self: Skittles suck as paint. The other year, I painted Jean-Luc Picard with condiments…still some lack in color choices. Sure, this year, I could have gone out and bought the other colors of Skittles, but no. I went old school. I’m not allowed to show pictures until the thing is over. Today I will be creating a portrait of my favorite actor, politician, or public figure in flower petals. This is problematic because I don’t have anything blooming at the moment. I did steal some from my friend’s house yesterday and will head over to my parents’ sometime today (shhh…don’t tell them…). I haven’t decided who to do, though. And then tomorrow, I’m making a special hat. A very special hat. Yup. And then it’s over…it’s only a week long! Sad but true.

So I had my sewing-during-the-summer meeting yesterday, where I’m mostly the only person who shows up, but that’s OK. I cut there for almost three hours…here’s where I was at when I left…

Then I went to Target to buy a birthday card. Yeah. So you know how that goes if you’re a teacher. 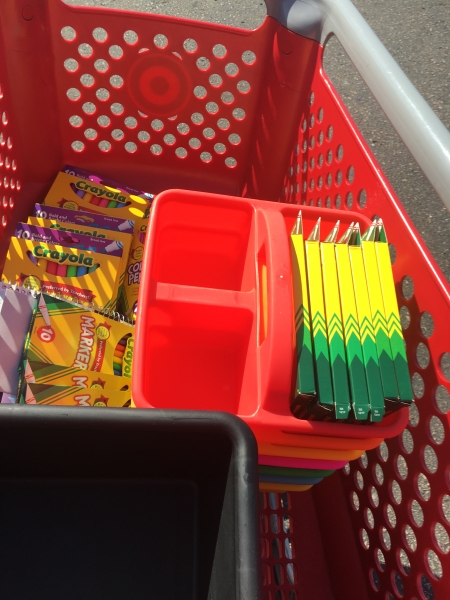 That is not just a birthday card. Pro: I’m almost done with school shopping.

And then I had to drive to Encinitas for an art meeting. I cut stuff out there too, for about an hour and a half, and then came back home and cut stuff out on the couch for another hour or so. The stuff that still needs cutting is in the top box…you can see it’s much emptier. All the cut stuff is on the bottom left and trimmings on the bottom right.

Significant progress…I’m in the 600s, so if I spend another 6 hours today, which is the plan, then I will be done. On time. On plan. What a concept.

Knock on wood, because it’s never that easy, right? It’s a goal. I’m aiming myself at it. The to-do list is long and complicated, but it’s still good to have a goal. OK, on to the copyediting and errands and all that crap.

*Tears for Fears, Head Over Heels