I have a guaranteed 4 hours of cutting fabrics ahead of me today, but I’m aiming for 6. I didn’t make 6 yesterday. I made almost 5 hours though. So that’s good. Everything takes so long…I don’t know why. We humans are such inefficient creatures. But then, what did I do? I trimmed some bougainvillea, I wrapped presents, I packed stuff up for shipping, I sent some stuff by email, I entered a GISH thing, I copyedited for a while, I talked to the girlchild about her wasp stings (18 at last count…it’s OK…it takes 150 to kill you), I moved kid and dogs and cars, and I cut things out. So why do I feel like nothing got done? Oh yeah, and I talked my doctor down off the ledge and bought myself 4 weeks to get my diabetes numbers down again. So that’s a doctor’s appointment off my list of things to do. She’ll do the next one by email or phone. Wahoo! All good. No really. See the list and say, wow, you did a lot yesterday. It doesn’t feel like a lot and that’s on you. True that.

I guess knowing that the girlchild comes home in 9 days and her room needs to be clean, and school starts in 14 days and all that shit needs to be done, and I have two quilts that need to go to the photographer in just 25 days, and one just needs a binding sewn on (Arrowhead trip, easy peasy) and the other one is only about halfway done and will probably take another 60 hours to complete? OK, there’s the panic. But it’s totally doable. Back to the goals. If I write them out, say them in my head, every day, I’ll get there. Get everything cut out by Friday night. Sort pieces Saturday, start ironing together on Saturday. Get it ironed together next week (except friend visiting, so that’s a time constraint) and then stitch down…shee-it. See that’s a time issue. But it will get done. The first week and a half of school, there’s no homework coming home. I can come home (exhausted) every night and quilt. It will happen. And I have a week’s leeway in there. I’ll be OK.

Deadlines. I don’t know if they’re shortening my life or not.

I’m still on call for jury duty by the way. Irritating. But I should be incredibly grateful (knock on wood) for only getting called in one day in the whole month and not having to serve on a trial, unless they do it to me again next year, in which case, I won’t be grateful at all. Sigh. You know, I’d be happier about it if they’d allow me to bring in scissors so I could sew. That one thing. That would help.

OK, school goals for this year: balance (OK, I always say that), organization (ha!), tolerance, connections, mindfulness (theirs and mine), parent connections, positive thoughts. Less irritation. I’m not sure any of that list is different from any previous year…but I need to say it in my head.

Outside in the evening is always cooler than inside. This house holds heat like a black rock. I was outside on the phone (getting eaten alive by bugs) while Calli watched. I should sit outside more often. Remember the plan to draw outside? Ah well. That’s always on my list and rarely happens.

If I let her out, she would just want me to throw pinecones for her. Which I would do, but I was on the phone.

Simba kept me company on the couch. So the pieces are in the box in reverse number order, with the highest numbers on top and the lowest on the bottom (except I dumped a smaller box into this larger box at some point, so somewhere in there, the order will reverse, thus confusing the issue). What this means is that I can sort of keep track of how far along I am by what numbers I’m cutting out. So even though the box still looks INCREDIBLY full, because it is, there is progress.

I know that shows 1000-something, but mostly I finished 1880 through the middle of the 1100’s, so I’m guessing about 700 pieces are cut out. (Simba is still there…he left and came back without your noticing.)

Which means I have less than 1200 to go. I have about 7 hours and 45 minutes into the cutting, so it’s about an hour per 100 pieces. Twelve more hours, so 6 today and 6 tomorrow. To-be cut on top, trash pile (I dumped the first batch into the ziplock bag already) on the left, already-cut pieces in the middle, dog on the right. In case you couldn’t tell. 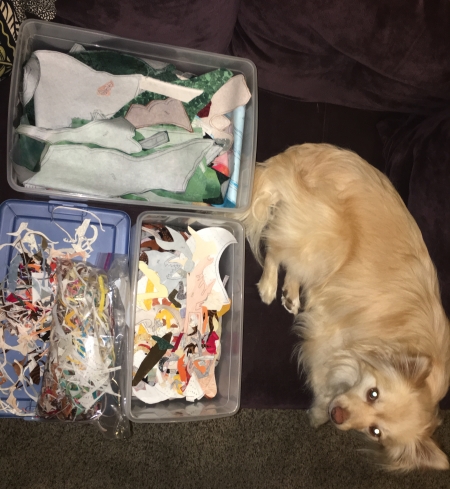 I do keep all the trash bits until the quilt is fully stitched down, in case I need a tiny piece of something to shove in there. I lose small pieces quite easily…in fact, the super-small pieces don’t get cut out until I’m about to iron them down because of that. Traveling with these boxes makes it more likely that I’ll lose stuff, but I do it anyway.

Still doing GISH things. I need to paint with Skittles water and make a portrait with flower petals (I have no living flowers at the moment…it’s the heat of summer…will have to go steal some…er…liberate some from somewhere else. Not sure where.). Probably see if something else can be drawn, since those are easy for me. I love to draw. I can say that about most of my life…I draw, I love to draw. I really should do more of it.

One thought on “As I Open My Lips, All My Words Slip Away*”