Oh hellz ya a long day. Got to school early for a parent meeting where the parent didn’t show. Always nice. Then taught about pregnancy all day…certainly made about a million times more difficult by the fact that we don’t teach body systems any more. Then did tutoring for an hour, mostly sitting by one girl and listening to her mangle words…talked to her mom (well, mom didn’t speak much English) about having the girl read in English to her mom and her brothers and sisters. She says she doesn’t like to read. I asked about magazines and the library. Mom’s all for it. Drove out to my photographer’s, avoiding traffic (but not dumbasses) for once. Got my quilt…he called it “tame” compared to most of mine. OK then. House cohabitant asked me if it had a woman spreadeagled with vulva in full view or an obvious penis. Holy hell, this quilt IS tame. Interesting, because it doesn’t feel that way to me.

This is Heart-Shaped Box…

The first drawing was done in 2014 and had the two main figures in it.

The fireplace got added earlier this month? I think? No, in mid-April. That’s right. I remember now. I took the trip during Spring Break, and came back and started drawing this full size. 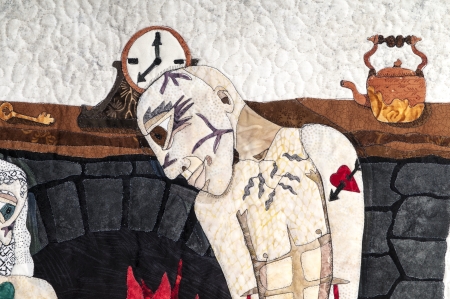 I added the fireplace and the backpack and the figure on the rug then.

The figure on the rug has been sitting in my head since July 2014, when I first drew this. 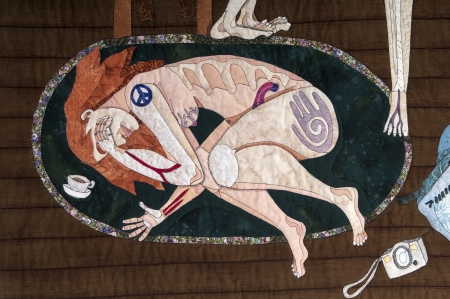 Weird how my brain works.

Calli is old, but she still plays…she was running around, throwing this up in the air for herself.

Weird dog. Then she slept for a good long while.

So after dinner, I graded for a bit…I can’t really ignore that. And then I finished tracing the new quilt…It took a total of 11 hours to trace the Wonder Under, and I think I did it all in the last week. Minus graduation weekend.

It’s a little less than 4 yards of Wonder Under. I found another double-numbered section. Brain fart.

And then I started cutting them out. If I base it on the last one, it’ll be about 6-7 hours of cutting…so 30 minutes last night…

Two or three tonight and tomorrow night, and hopefully I’ll be done by Friday night…sort them, and start ironing down over the weekend. Sheesh. I really don’t know if I can pull this off.

Simba just wants me to pet him.

I didn’t get far in 30 minutes last night… 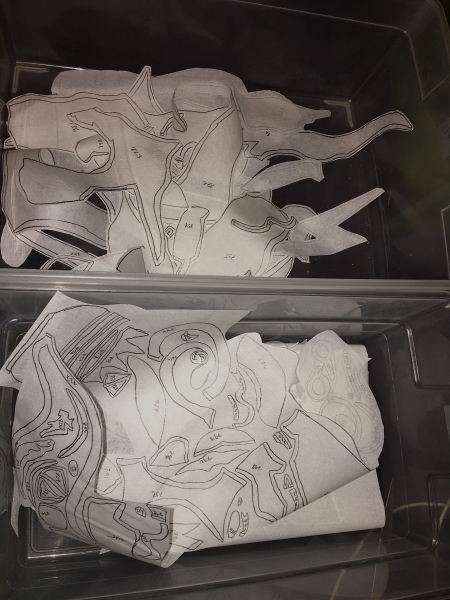 More tonight. More of the CRAZY tonight, because this is more than a little crazy. Meanwhile, here I am, up early again, for another meeting (parent will show for this one)…just no repeat on the tutoring and quilt pick up today. I have two other errands instead, plus it’s my turn to cook. Twelve days of school left…