Most common nights that teachers don’t sleep: (1) The day before school starts in August (or September, if you’re on that track). (2) Sunday nights. I don’t even know why. I totally tried to shut my brain down. It just didn’t work. I was talking to the girlchild right before, but I also was just glad to hear from her (earlier that day)…the no-internet week was difficult. Meanwhile, boychild is sending me pictures of lost weather balloons (REAL ones, not the Roswell kind of weather balloons).

Yes, I spent most of Saturday in a car. Then talked about my work and all the other quilters’ work (because I was the token quilter there). Then we took all the work down and shoved a bunch of it in my car and drove back. Woo hoo! Ugh. Sunday was like it always is…do some work, clean up, do some yard work, grocery store, prep some food, hopefully get to some art. And the art started early, because I had graded all the makeup work and couldn’t handle anything else. There have to be days of the week when you don’t work. And I already had.

I have my post-dinner routine that will get this quilt done…we finish watching whatever not-quite-an-hour-long show it is and then I sew more balls on until the show is done. I’m on the last thread color…I think. I missed one pink one and some of the red ones seem darker, but let’s just say I’m close to done with sewing them down. Then I need to embellish them. 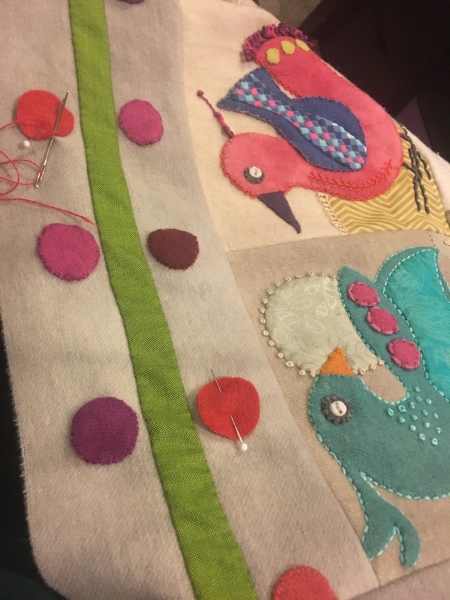 I was actually looking up how to quilt wool last night, because the quilt BEFORE the birds has been pinbasted for a million years. I feel like it needs a heavier thread than what I usually use, but the woman I watched on YouTube used a thinner thread. So now I don’t know.

Anyway, so I am trying to get the other one done too…I guess this is number 3. I have all the wool cut out for September and October, but nowhere to put it. So I pieced September to one of the first blocks I embellished…

And then pinned down the beginnings of stuff.

I think the whole thing gets sewn together after that, which is a little scary. Don’t worry…it’ll be a while. I have a ton of embellishment left to do on the other piece that traveled with us throughout the Southwest. I didn’t get much done.

This was because the boychild needs to come home after college and may well be driving.

I was just curious. It’s about how far we drove over Spring Break. But with no help. Long way.

Then I started drawing…it was easier last night. I added an octopus and a jellyfish. So much for keeping it simple.

Then Christmas lights, of course…and the requisite bones.

Stardard fare…some ribs, a uterus, the inevitable iPhone, some stuff from the past, and gingko leaves.

Her hair on the right side…haven’t decided the left side yet. There’s more to add in there.

Found the other drawing I was considering for the time theme. This is good. It’s almost done, as far as the two figures are concerned…

There’s a third figure I need to draw…but I need to add paper to do that. I think I’ll try to do that tonight, because this deadline is earlier than the other. Honestly, I’m not sure I can finish both. So there’s that. Never let that stop me yet though.

Wow. This is a tired way to start a week. Ugh. Oh well. Must go on.