I got a good night’s sleep last night after an hour of drawing (yes, only an hour…you can thank my day job for that). It was delightful. Except when one of my neighbors was slamming car doors at 1 AM and the puppy decided he needed to protect us from that.

Seriously, this dog is the biggest (sweetest) asshole there is. I finally got up and sprayed him with the water bottle (No BARK) and he grumbled for a while, let out a few rebellious yips to show I’m not the boss of him, and then went to sleep. Until 3 AM or so when he did it again. Yup. I’ve got control of that beast.

Yeah, I graded last night. I came home and finished the other big assignment that I was supposed to finish over break. I still have more to do, and progress report grades have to be done in about a week, so I’m trying to be on top of it all. LAST PROGRESS REPORT OF THE SCHOOL YEAR. Yeah. That’s good. I like that. I had to really force myself to grade the last period. I wanted to put it off so bad. But no.

So while we were driving around last week, in the middle of the night (well, no, at 3:11 AM when someone in the hotel room next to us was banging on the door and yelling LET ME IN over and over again), I got this amazing idea for a drawing that related to time (one of the topics I need to hit in an upcoming quilt…I have two dueling deadlines of course). I sketched it briefly and described it (the picture is still indelibly inscribed on my brain, so that’s enough), but now I need to get it out of the head and onto the paper. I tried earlier this week and failed, but I will try again. But when I started trying to draw it, I realized it was going to be huge and massive and I like to do at least one really big quilt a year, usually in the summer, but the deadline for what I was trying to do is early June. So then I thought about this other drawing that I started ages ago and needs finishing and would also work (and would be much smaller and doable in the next two months), so I had sort of decided to pull that one out and finish it for that show, and then draw the other one for summer (although there are two other deadlines I’m interested in for early fall, so there’s that as well. Aaugh.). All that decisionmaking, though, made me give up on trying to do that drawing first, so I started this one.

This one is kind of about me as an artist, starting way back, although not TOO way back, because I don’t remember everything, but just thinking back to what influenced me, what kinds of art I’ve made, what’s made me the artist I am…so that’s this. There is, of course, no guarantee ever that it will get into the show for which I make it…that doesn’t bother me at all. It’s an idea that spoke to me and I’m drawing it. All good.

So when I finished grading, I did some more stuff on the one arm in the air, worked on her hair, added lungs and then worked on the other arm, which lead to upper thighs and a uterus (you knew that was coming, yeah?).

Obviously there’s some stuff that needs to happen in the middle. That’s still whirling around in my head, although a gingko tree is in there somewhere. I used to be a screenprinter; hence the squeegee. 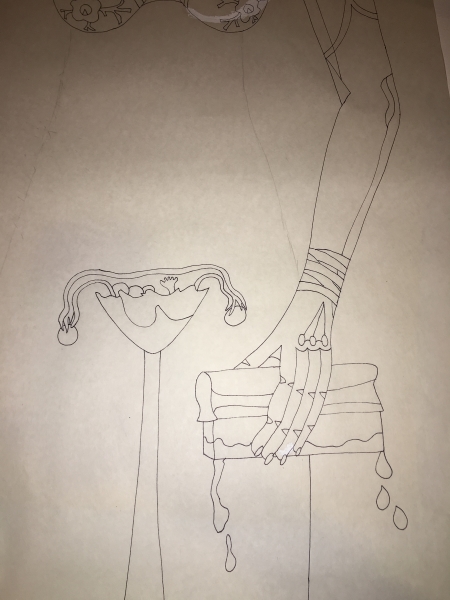 I’m driving to LA today and talking and taking down a show, so I’m not only missing the March for Science (dammit), but also not getting a lot done today in the art world. The show was supposed to be up for another 3 weeks, so I’m more than a little irritated that we have to do takedown today, but whatever. Some people in the art world are flakes…we all know that.

This popped up in my email as being from 9 years ago (I think actually the book I made from these is 9 years old…some of the pictures may be older). It’s my kids and my brother’s kids…all so tiny and cute. 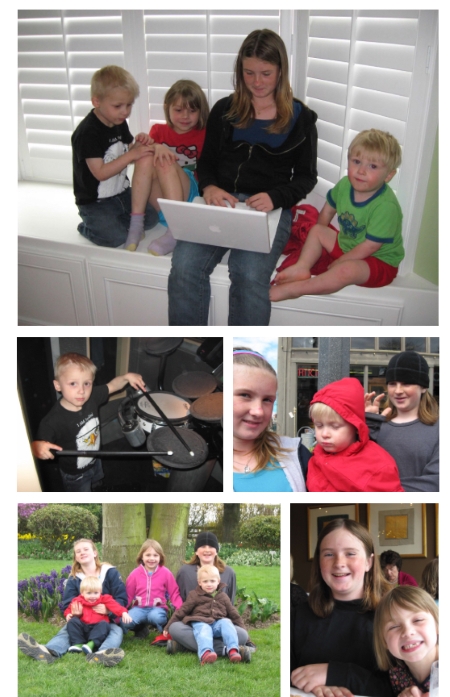 And smiling! Mostly. Kinda weird. And no, I still haven’t heard from the girlchild. She’s either walking back from that village tomorrow or Monday, so hopefully she’ll reappear. I know she has to check in with her local advisor every two days, and if there were a problem, he would have contacted us, so that’s what keeps me from freaking out. Mostly. Mom brains. They’re so annoying.

Other annoying things: Apple’s new update to iCloud now does not allow me to select multiple pictures. Their solution says to use iCloud on my PC, except it still thinks I have a corrupt database and wants me to sign out of it. That bug has been around for months with no solution. Buggy as hell. iMessage is also still buggy as hell, and that’s on an Apple device. And then one of my local school board members (one I did NOT vote for) is pro arming teachers…unfortunately, I think it’s another two years before we can vote him out. Sigh. Stupid stuff.

So driving to LA…gonna pray to the traffic goddess for no accidents or stupidity (ha!)…hoping for good attendance at the talk and an easy takedown. Tomorrow? Not much to look forward to…grading and weeds. That’s about it.