Good morning blue skies. It’s nice to see you, even though I (sort of) appreciated the rain. It wasn’t quite enough. And it didn’t have to be while I was trying to be outside every time. That part made me laugh. I’m leaving the union meeting and some sweet young obviously dissolvable thing just stopped when she saw the rain, looked heavenward, and sighed heavily. I assumed she had a car in the parking lot, like I did, but maybe she had to walk 2 miles home. That would suck. Me? I just walked out to the car, wiped off my glasses, and drove home.

So first of all, today is my mom’s birthday…so here’s a picture for her of a Madagascar sunset from the girlchild…I think I paid $40 for that picture (or for the app that retrieved it from her camera…long story…totally worth it)…

May she have a delightful birthday. May Dad take her out to dinner. I already made her cake.

Yesterday’s lab…one version of it.

Lab days are tiring. One more this week, I think, and then one big one next week too. Then done with that for a while. Wait. No we’re not. We have 7 days of labs coming up in a row. (Bangs head on desk for a while. It will be fine. It will.).

Came home after short meeting and graded stuff while puppy was cute.

I’m so behind on grading. I was almost caught up last week. It’s such a fleeting feeling.

I came in here and entered another show, plus did some other computer stuff. Never-ending computer stuff. So it was about 11 PM when I finally got my focus on the fabric…flesh tones!

So easy to pick this time. Not sure why. I did toss some blue into the mix…just a tiny bit in here…

Makes it fun. Plus links back to all the blue around the figures. The people on this one are pretty small, compared to some of my figures, so it didn’t take long to get all the flesh ironed down and into the box to be cut out. 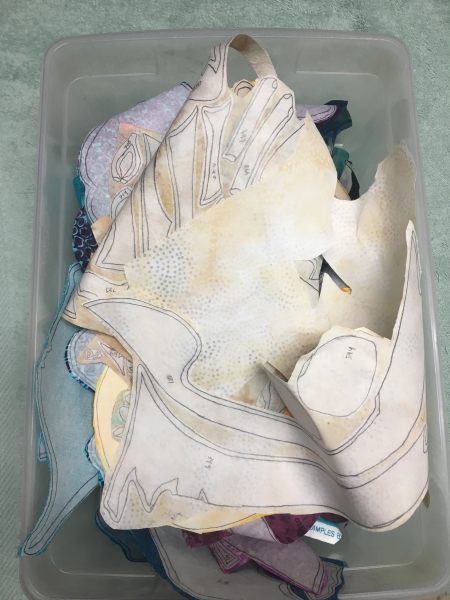 I thought I might be doing that today, the cutting, or at least starting it, but quilt class was canceled again for sickness. So I guess I will be ironing and grading tonight…and going to the gym if I can force myself. Honestly? Probably not. Maybe tomorrow night. I’m exhausted already. Up early for another meeting. But I should be able to finish ironing tonight. That would be good.

Here’s all I have left to do…mostly bones and hearts and veins and a tree and all the metal bits. I do have to decide about the back opening. I was going with the flesh tones, but I kind of want to echo the skies, the spacey bits. So I’m still thinking about it…less reality (open cavities and all)…more fantasy. She’s filled with SPACE!

Which reminds me of the misconception an awful lot of my male students have, which is that we all come from sperm. Yes, folks, it’s the 1600s again and we don’t realize the female is a significant part of the reproduction process. It’s gonna be a fun sex ed unit this year! Seriously. These kids needs some educating.

Here’s all the fabrics I’ve used so far…it’s a lot! But more to come…some greens and reds…not a lot of those yet.

And if you really want to see THIS quilt…it will be at the Visions Art Museum April 21-July 8 as part of the Things That Matter exhibit…which is cool.

Because I get to go to the opening. We’re hoping this show will travel all over, so stay tuned.

OK, meeting time and then get through the day without losing my brains. That’s a whole ‘nother drawing, isn’t it? Oh yeah, I did hear from the girlchild finally last night (she’s been incommunicado since Sunday night)…and she had an awesome time with her lemur trip, although the village they stayed in/near had never seen white people before. She said there was a lot of staring…interesting experience for sure. I’m glad she’s having a really good time in Madagascar, learning lots, even though the language stuff is hard. I think this is the kind of stuff that makes us who we are in the world…and I’m glad she’s doing it.