I am currently being harassed by a puppy. He doesn’t understand mom’s morning routine. He doesn’t know I’m running a lab today, I have a parent meeting before school, I still have duty before and after school, and there’s a union meeting after school. Ugh. Long day. Oh yeah, and a pre-observation meeting. I typed up my lesson plan, but realized yesterday that I have a hard time getting my head around the constructs administrators like to use to observe whether we’re teaching correctly. I do it automatically…it’s harder to pull out the pieces and say, oh yeah, here I do this and here I do that. I just do it. But this should be the last observation for another 5 years unless I piss off another principal. That’s the reality of it sometimes…who did you poke too many times. Frustrating job. And people wonder why we need unions. But that’s a whole ‘nother discussion.

Oh yeah, and it’s V-day. Happy Valentine’s Day to y’all. If you like that stuff. Too much chocolate for the likes of me.

Puppy went outside with his big sister. Can’t send him out alone. Too many coyotes.

Yesterday was also a long day, but I currently have a very heavy piece of James E. Watts’ art residing in the boychild’s bedroom, waiting for the exhibit that will open mid-March. I’m glad he trusted me to drive off with one of his kokeshi. More about that later…when I actually have details.

I have to admit that I finished my book before I ironed last night…mostly because it was due to the library today, and because it’s electronic, they just take it. I can’t hold onto it and just pay the fine. I had about 60 pages left. It was good. The next one in the series is on hold, but I’m about number 5 on the list. I’m reading the James S. A. Corey series that was used for the Expanse TV show; just finished book 2. I actually think the books are way better. But now I don’t know what I’m reading next…whatever I can find in the pile, I guess.

Then I ironed. So it was a late start. I have a little over 7 hours into the ironing so far and it’s going to be a while…the flesh parts are next and they are time-consuming.

This is all I have of this yellow fabric. I started with a half yard many many years ago. Seriously, I started buying quilting cottons 27 years ago. This one is useful, although you are looking at the back of it.

I do have my favorites. Not much left of this one.

Here are the two metallics Julie bought for me on sale, from some store going out of business. I was considering metallics for the screws and posts in the spine of the lefthand figure. A different kind of bling…

The question was whether they’d hold Wonder Under and if the heat of the iron would destroy them.

Well…I did use a pressing cloth, just in case. The bright silver one is fussier than the darker leathery one (which is a great texture), but I think they iron fine. Stitching them might be a pain, but what’s new? I’ve used satin and sequin stuff before, and it was the same issue with them…permanent holes.

Here’s the pile of fabrics so far…yes, there’s the sun on top. It was actually in the 700s, but I finished all of the 300s that weren’t flesh colored, and I wasn’t ready to pick flesh tones (it was almost midnight), so I did the sun early. 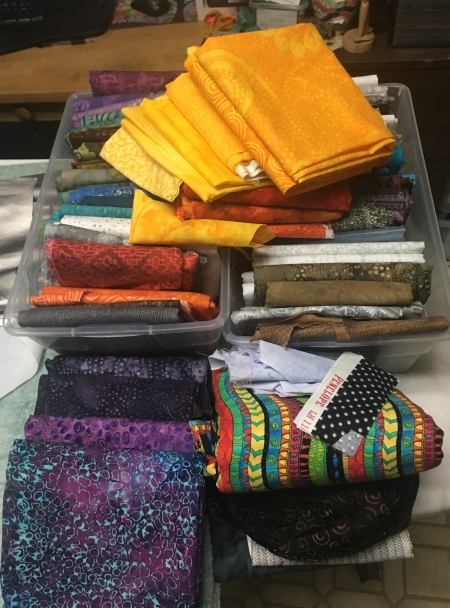 Honestly, I’m about halfway, and the rest of it is all the two bodies in the quilt…so mostly flesh. I’m hoping to pick those tonight, and then maybe Thursday get all the innards done. Like bones (so many bones) and metal bits and hearts and trees…because yes, one of the figures has a tree. Why not? Exactly.

It’s actually a metaphor for the metal that’s helping her spine stay straight…the trunk of a tree? Yeah? OK. Just nod your head. I’m not good at the explaining part of my quilts.

Here’s the pile of pieces ready for cutting…

And the group photo…

It looks so chaotic at the moment. It will all come together and make sense. I used some of my favorite fabrics in the sky…space is a cool place for purples and blues. For a while, a lot of my quilts had layers of earth at the bottom (I don’t know why I say “for a while”…like I’m going to stop doing that. I still like it)…now I’m branching out into space. Anyway…I’m enjoying this part of the quilt. It makes the long days doing work stuff worthwhile. I also spent some time last night trying to map out some exhibit entries…there’s a bunch of stuff in the next few weeks that needed decisions…I think I made them, although now I’m wavering in the morning light. I’ll let it sit for the day and then decide for real.