All the tireds. Too much dog barking at invisible things outside and cats invading space with loud meows and aargh. I think it’s cruel that sleep is so easy for little kids when we obviously need it more. Then again, I wasn’t that good at sleep when I was a kid either. I’d read my book under the covers because I couldn’t fall asleep easily (and also because books good, sleep boring…that’s still true, I guess.). It’s a rough start to a stressful week, though. Although really, the stress is what we take on sometimes. I dealt with 55 emails about late work yesterday, plus got one other assignment graded. Not the best weekend achievement, but it was something.

Being a teacher definitely is stressful. Too many demands on our time and patience, usually not enough of either. I have duty before and after school for the next two weeks. Morning duty is easy…I stand by the bike rack and nod at kids and make sure parents don’t drive into other students. Afternoon duty, though, is the crosswalk of death. Mostly because adult drivers don’t stop and all I have to stop them is my hand. Seriously. I need some sort of electrical thing that stops their car and fries all the wiring if they’re dicks. Because a lot of them are. It’s hot, tiring, and annoying. There’s a lot of yelling, mostly mine. I hate crosswalk duty. They’re supposed to rotate duty every year, but this is my second year doing it. Someone dropped the rotation ball. Whatever. So today, though, I have crosswalk duty, and THEN…then I have a 2-hour staff meeting focusing on a chapter of a book that I haven’t read (because they didn’t even mention it until Friday afternoon and then I forgot the book at school, plus I need more warning than that to read a pedagogical screed), where they want us to incorporate what’s in Chapter 6 into upcoming lessons. This is where I want to slap the principal and say, “Hey dude, you know most of us plan way further out than that (seriously, we usually do) and we also have formal observations coming up so leave us the fuck alone.” But generally that sort of behavior is frowned upon. Sometimes I think principals need to be required to be teachers for at least 20 years before they can be principals.

I’m sure it will all be fine. I’m annoyed by it now and I’m going to try my hardest not to be annoyed by it in reality. Mostly because it doesn’t change the stupidity.

Yesterday, I spent a lot of time working. School working. I also managed a trip to the fabric store for some backgrounds. I was incredibly indecisive, mostly because there were too many people there and the one woman in the batik section was taking up too much space, some of it in my personal space, and I needed her gone. But I got these potential backings…

They’re all more blue in real life. Except the purplish one. I’ll decide later. I usually only get one or two…so yeah…majorly indecisive.

Then these were just because…

Although that purplish one would be good in the sky…maybe.

Eventually, after going to dinner at the parentals and making my lunches for the week (I love cooking…really…not)…I sat down and started cutting stuff out.

It’s actually going really fast. I only have one full yard and about a quarter of another one left. Notionally I could be done tonight and ready to sort. If I survive all that other shit. 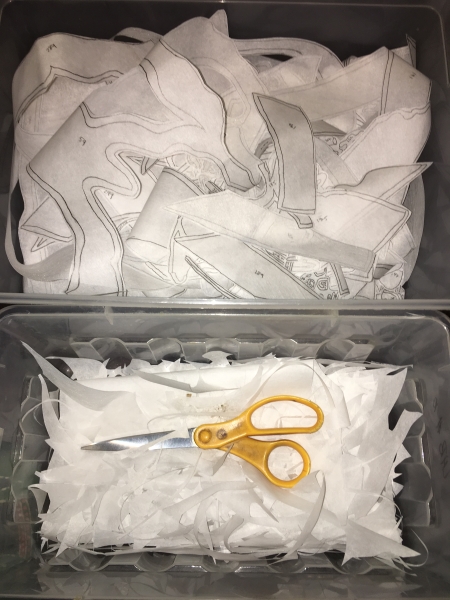 A big pile of trash on the bottom; a big pile of pieces on the top. It’s good that I bought the background yesterday; the quilt store doesn’t stay open late any more. Besides, this week is a cluster at night…three nights booked. So that wouldn’t have happened anyway.

OK, gotta get outta here and go do the standing in front of the bike rack thing…plus getting ready for another lab day of kids not reading instructions and wasting materials. Fun stuff. I’m ready. Not.

2 thoughts on “Pick Me Up and Shake the Doubt*”