There’s always a point in the task I’m performing while making my quilts when the scale tips, when I can see light at the end of the tunnel, when I know I’m close to the end. That was last night, when I got into the 1100s and realized I only had about 250 pieces (or fewer) to go. Then I can visualize the next step, maybe even the end, and start thinking about the next one. Not yet. Not with this one. Have to get clear of school to get my head around the next one, but it’s percolating. Fermenting. Bubbling away in my brain.

Puppy was very tired yesterday. This is how I felt when I got up in the morning and started grading for 6 hours or whatever it was. I still have to input the final stuff into the system tonight or this afternoon or whenever I can fit it in. 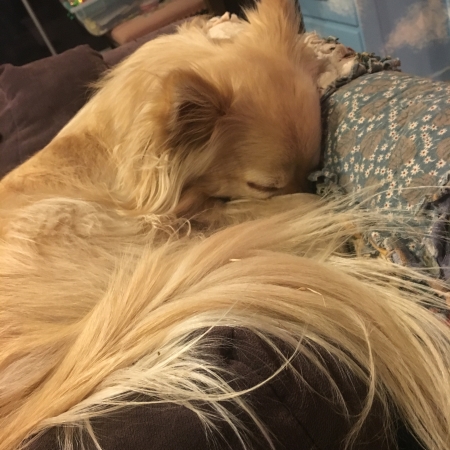 I ironed a little in the afternoon…had to stop mid-face for dinner. 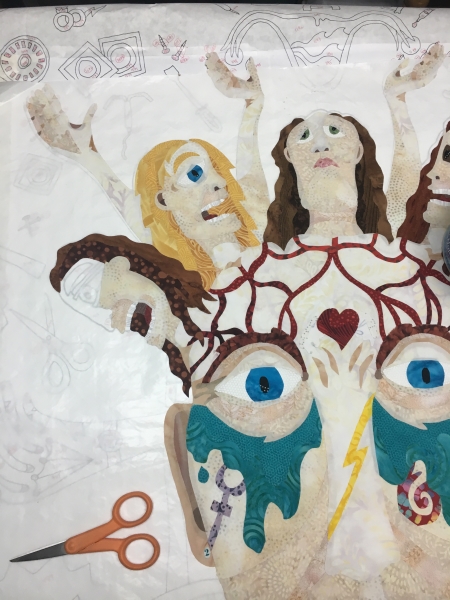 I was three nights behind on this, so I put a chainstitched wave on the left side and started filling it in.

More circles, covered in cat and dog hair, of course.

There’s only 90 of them. It’s only taken me a year to get to this point. They all have to be stitched down and embellished. Sounds like a Christmas Day project. Maybe.

Then back to ironing…finished her head…

Added the last of the arms…

Ah Midnight. Weird story. I was sitting here grading yesterday afternoon and felt something brush against my leg, automatically thought it was Midnight, because that’s what she always did. But she’s dead. And there weren’t any other animals in here.

Yeah. Well. Creeped out now. This is the room where cats always stare intently at the ceiling, like there’s something there, and then I whip around to see what it is, and they pretend it was nothing…until I’m not looking at them, and they start that intense stare again. Sigh. 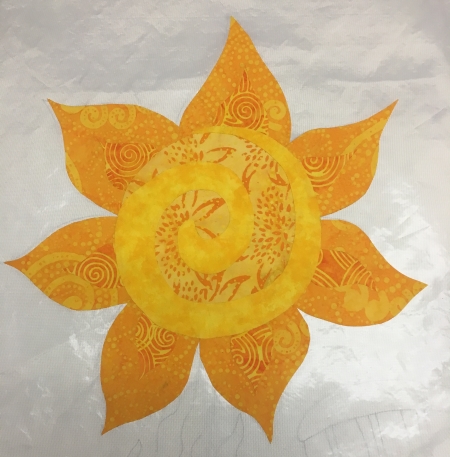 Following by a spaceship and a condom. You know, like in real life. 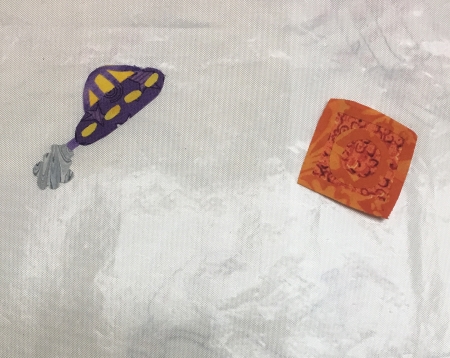 Lots of birth control options here, although I would recommend against the screwdriver for that, and I think marriage is NOT supposed to be a birth control option. Although the current regime certainly thinks women shouldn’t be allowed to have any of it without marriage. Unlike men.

Sometimes I really hate people. I try not to. I try to mentally explain and respect their stances, until they negatively affect me and everyone I care about, and then they just irritate the fuck out of me. This quilt is about that. Things that matter: Women. Their rights. Options. Not having someone tell us what we’re allowed to do and when and how. Having a voice.

I have a draft of an email to another teacher on my system at the moment. I’m obviously more mature than I used to be, because I haven’t sent it yet. There’s a trigger I’m waiting for, and then it goes. I’m looking forward to break so I can hermit away from the populace. And make art. And hopefully not grade a million things. Ha! I already know I have an entire unit due Friday. Oh well. It’s still gonna be vacation.

*Peter Gabriel (and Kate Bush), Don’t Give Up