Hopefully it’s soundproof. I really really like the idea of this. I think the cats would be OK with it if there were a cat flap. I mean, I know they’re selling these mostly for kids, but WTF. This is my dream. Now fill it with pillows and move the alarm clock way the fuck out of the room, and then let me sleep in peace for like a week. I joke about the last time I got a good night’s sleep was before I was pregnant with my son…who turned 21 this year. Yeah. I wasn’t joking. That’s for real.

The mornings have been beautiful this week. One of the benefits of Daylight Savings being gone. It’s gone, right? I can never remember. Is this my life ON Daylight Savings? Or OFF of it?

And these came yesterday…gonna put them on the car so I can get keyed in all my local parking lots. 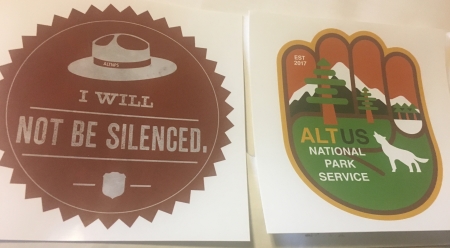 Anyway. I came home from work yesterday and moved everything on my calendar from yesterday’s to-do list to today’s to-do list. I’m not sure it will all get done, but I really couldn’t deal with it. I knew I had a show to go to last night, but later, so I tried to do something useful. For instance, I had three days of 1 Year of Stitches to do…because I just lost it this week apparently. I’ve been really good up until now…never more than a day behind. I had found two batches of some perle cotton in a color range, so I decided to just use one a day. Hence the purple and blue from before. These three are the yellow above the blue wheels (under the tree) and then the orange bullions in the grasses to the right of the tree, and then I went in with the red and filled in the yellow bits, then went down and did some French knots in the fly stitches under the tree. 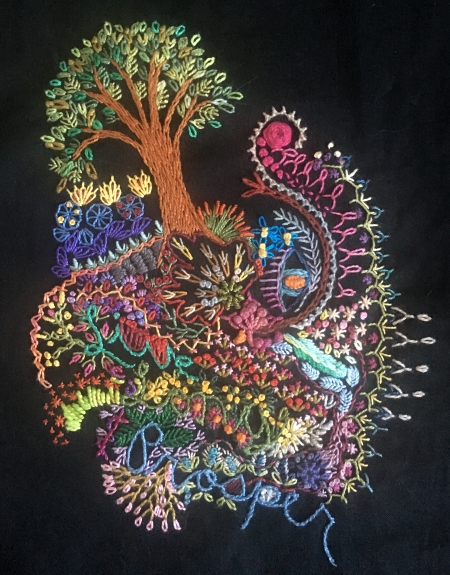 I was going to do some fill in around the blue and purple, but I think I want to use something variegated in there. For interest. Maybe today’s…

Here was my lap partner. 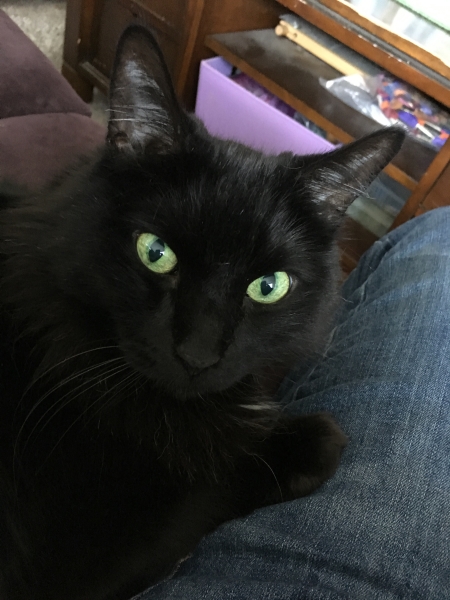 Pyscho puppy was in and out. I just throw balls for him in between taking a stitch. Literally. It’s like one stitch per throw.

Then because I wasn’t budging off the couch until I had to eat and get ready to leave, I finished stitching down all the wool and cotton on the block that’s attached to the third block I was supposed to be embroidering on (if that makes any sense at all…because it only barely does to me)… 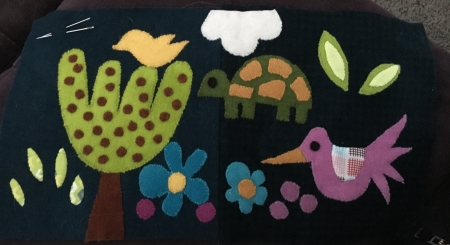 And because I still didn’t have to leave, I started the embroidery on that block…couching a thicker thread with a thinner one…two needles going at once. 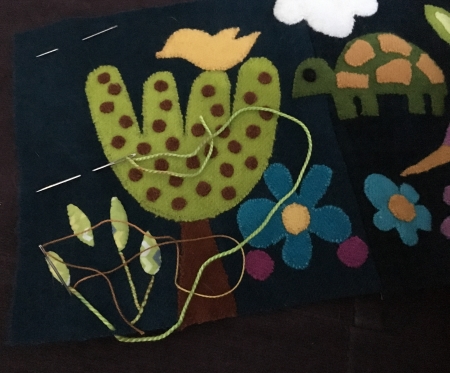 There’s a lot of that in this quilt. I really do find this embroidery relaxing. Sure, I could have come in here and sandwiched the quilt last night, but my feet are hurting…that damn inner-foot arthritis. Only hikers with flat feet get that shit. I guess I need new shoes (not hiking boots…school shoes) again.

Then I went to the show, which was out in the boonies…and actually enjoyed myself…

Even when the drunk guy tried to drag me out onto the dance floor (foot is still hurting…plus drunk guy)…but it was really late when I got home, so I went pretty much straight to bed.

This morning, I’m trying to be focused. The problem is the number of things on which I need to focus. So my brain is trying to distract itself…like wouldn’t you like to make one of these small quilts next?

Although I found the one I really am doing next, since I got the other rejection, confirming that I’m sticking with bathtubs…and I really like this one. So I’m good. 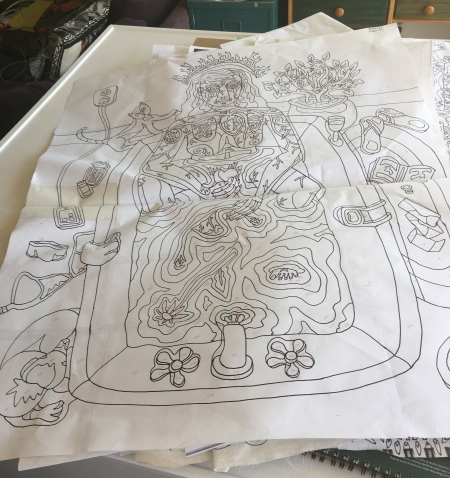 There’s even a piece of cheesecake in this quilt (can’t see it in this photo). So that’s cool. 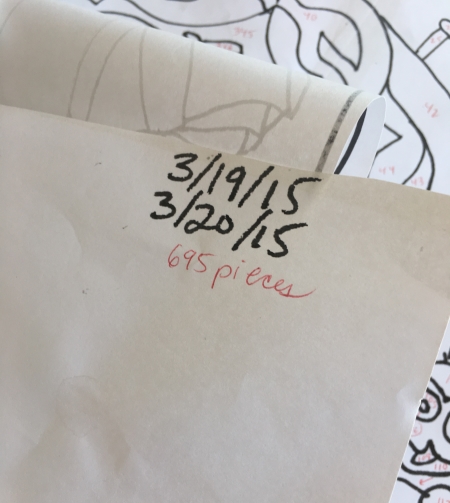 Wait. Seriously? OK. So get your act together Kathryn, because you’re gone for a week in April. Counting this coming week, that gives you 5 weeks. Dammit. OK. I got this. One of those weeks is Spring Break, so I can put in some serious hours. Don’t think about school and grading…you’ll figure that shit out. You always do. Sleep? You suck at it anyway. I don’t even know why you worry about that.

I did just realize I forgot to schedule the machine in for cleaning/adjustment, so I scheduled that. Right now. In the middle of writing this post. I’ll be done with this quilt, but I’ll still be in the pre-quilting stages of the next one. So that’s awesome.

OK. Get a grip. Make a post-it note list. You know you love those. Maybe eat something and take a shower. And at least one more cup of tea.

I guess the difference between me and her is that I’ve read To Kill a Mockingbird…I don’t really want to kill it…I just want it to shut up.

One thought on “‘Neath the Black, the Sky Looks Dead*”