You know, when you plan to cook a meal with your slow cooker and then you forget that you broke it back in June when you were carrying it back from school, where it had pancake batter or something else in it, and you never replaced it, because you didn’t want to pay for shipping, but you never actually wrote it on any to-do list anywhere to go somewhere and buy one, which pretty much guarantees it will never get done, well then you will have to drive BACK to the hellish mall where you just were to go grocery shopping so you can buy one. You will also have to stand in line behind someone who doesn’t realize you’re holding a huge box because you couldn’t be bothered with a cart and she’ll just be hanging out on the thingie (I’m sure it has a name CONVEYOR BELT…that only took 20 minutes to come to me;) where you put the stuff you want to buy until her husband tells her what a dick she’s being. I’m often confused by how unaware people are of those around them…physically and otherwise.

We have a new slow cooker. It’s fancy…has 4 levels of cooking instead of 2…and a nice lid that snaps on. The previous one lasted longer than my marriage, much longer, so that’s a good thing.

In incredibly sad news, Paul did die yesterday as a result of his injuries. His wife was my co-teacher in science a few years back. She has three small children and his income was all they had. I’m posting the GoFundMe again here, as she will need all the help she can get. She’s a quilter, although more traditional (a batik fiend, though), and I have used some of her scraps in my own quilts. I think she introduced me to my first real-live game of Cards Against Humanity, so there’s that.

Yesterday was full of work and busyness. I did catch up on a lot of school things, but I still feel buried. I guess I should become one with that feeling. After 16 years, you’d think it would be easy. But no, there’s a constant sense of panic and Oh Shit going through my head. I don’t know if that ever goes away.

As part of grading…

Yes I corrected his spelling. After snorting tea out my nose. Of course cock faults. Sigh.

Kitten has a slightly new hiding place. Not as far in the hole as she usually is.

I didn’t get to start drawing until after 9 PM, as always. I added a rosy boa in the bottom right. 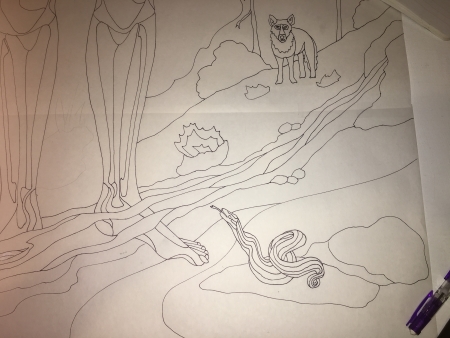 And then went into the water’s edge on the left…Great blue heron, California least tern, crap I don’t remember the last one…

Western snowy plover. The plants are harder to do without a million pieces.

I sketched in the last water plume up above…it comes from her head and down into that empty space. That’s for tonight.

That and finish the hill/sand, and I’ll be done. My notebook has lists of plants and animals for each ecosystem area. This is more realistic than I usually do. Hopefully it will turn out well. I’m hoping to finish drawing tonight and maybe start numbering. I need to get it all traced this week. I think. All I can really think about right now is a nap though. Not a good sign.

*Rusted Root, Send Me on My Way

Finally back to this... #artquilt #quiltart #saqa #saqaart
This sweet little psycho in the morning...