Trying to shut off teacher brain long enough to write…it’s trying to figure out a problem for today. It’s like listening to my students argue. Geez, just shut up a moment. We’ll be fine if you be a little bit quiet. Or not.

I have a meeting after school today and I’m trying to decide what assignment I can grade at the meeting. It has to be low maintenance or I can’t hear the meeting at the same time. I take notes to send to my people, so I have to be able to hear. Which means my teacher brain can’t be distracted by other shit. So not complicated, but needs to get done. Hmmm. I have until the end of the school day to figure that out. That’s not even the problem that was distracting me. That one woke me up at 2 AM and niggled. I hate niggling.

You know how you say yes to something and then you wonder why you said yes, why you decided this made sense, and you know why, but all of a sudden it’s a pain in the ass and you don’t want yes to be the right answer any more. It still is the right answer, but yes now means something the size of a football stadium and before it was much smaller. Like hold-in-your-hand smaller.

Anyway. That’s my brain at the moment. Highly distracted. I try to bring it back into the art world each night. Some nights I am more successful than others.

I did not finish the binding last night. I graded until almost 10:30 PM and then I wanted to tape the full-size drawing together, so that’s what I did. It took me 30 minutes to stand up to do that, but it’s OK…I eventually got there.

About layers of the Earth, not pizza.

To the parking lot on the way out of school…two crows and their very dead friend, the gopher. They were picking at him when I drove up. 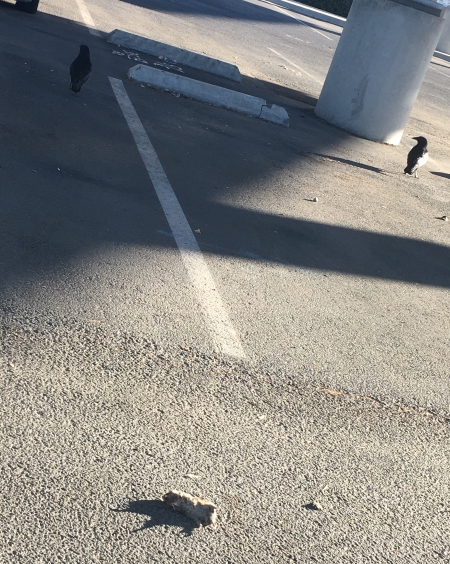 To cutting and pasting the enlarged drawing together…I did 200%. And then added paper on all 4 sides so I could see the whole space.

Much easier to visualize now. Although I won’t probably get to it tonight…got a union meeting AND book club, and book club is many many miles away and somewhat complicated tonight. Ugh. I’m not really up for complicated and far away, unfortunately. We’ll see how I feel after the meeting. Actually, I shouldn’t give myself that out…because I won’t go if I base it on how tired I am after the meeting. It’s a new location and it’s different so I’m weirded out by that. I guess. Ugh. More caffeine. Go to work. Think later.