This morning’s tea is perfect. It’s brewed exactly the right amount of time (not that I ever pay attention to that at all), it’s the perfect temperature, not so hot that it burns my tongue, but not lukewarm and blah. It has just the right amount of milk in it. I’m so happy with my tea this morning. It makes up for whatever crazy thing I did to my overnight oats (from two overnights ago, which might be the issue right there). It’s like eating shoes. With berry seeds.

Long day yesterday…lots of trying to get through demos (and failing…part of the mental problem right there…could not finish). One of the demos failed. Actually failed…not because of something I did (although my co-teacher was considering that in the beginning until I showed her my failing can of soda that wouldn’t sink)…I guess that’s a learning moment right there. We’ve had to scramble so many times when labs didn’t work the way they should.

I had tutoring, where I explained density about 700 times. And then helped kids with barely any English put their thoughts about density on paper. That’s the harder part. Then the blessed chiropractor. I didn’t know my neck was bad until he fixed it. Home to dinner, which I cooked to perfection…no really…it was good. Which is nice, because I’m having it for lunch as well…I think I’m going to run out of lunches this week. I didn’t remember that stuff goes bad, so I didn’t eat things in the right order, so I’m short a meal, I think. I’ll figure it out.

While dinner was cooking (and afterwards), I was trying to set up the tests for today. There are three versions of the test and they’re assigned online. The easy way to do that is just assign the same test to the first 10 kids, the 2nd version to the next 10 kids (alphabetically), etc. But no, I decided to do it by seating chart, so no kid would have the same test next to them. Kinda crazy. Probably fucked it up. After dinner, then I tried to grade some of the essays they wrote a few weeks ago. I got through half of one period. I know we taught this. It hurts sometimes to read the results of my teaching and try to figure out what I did wrong. (It’s not always me.)

Finally in here, the studio…spent a little time on stuff for next week in class, but mostly I quilted. I didn’t feel well at first. Stomach can be iffy some days. Waited it out, felt better, had some more tea (I was tired. That tea wasn’t perfect, but it did its job)…and quilted.

Well, first I stared at this and tried to decide if I was going to do anything on it. I didn’t. 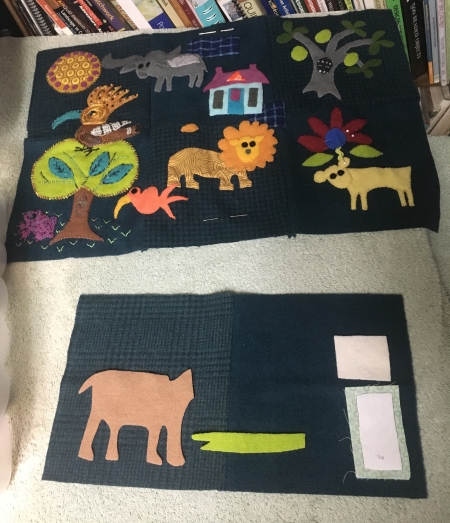 And then I stared at this, because the other chair had Kitten on it and this is my quilting chair, and it’s pretty uncomfortable to perch on the edge of this one while trying to sew. 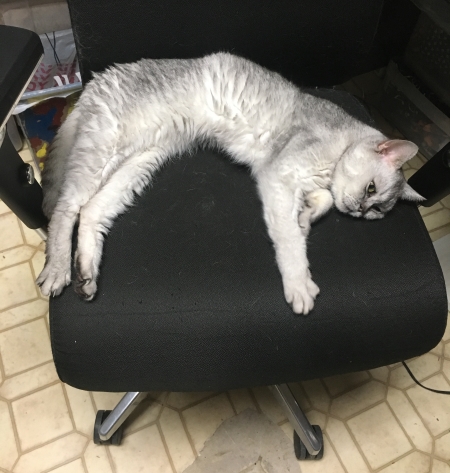 Apparently Satchemo doesn’t like it when I do that either, so he left.

Quilting! I only broke the thread once last night…it was very easy to quilt last night, unlike the previous night. 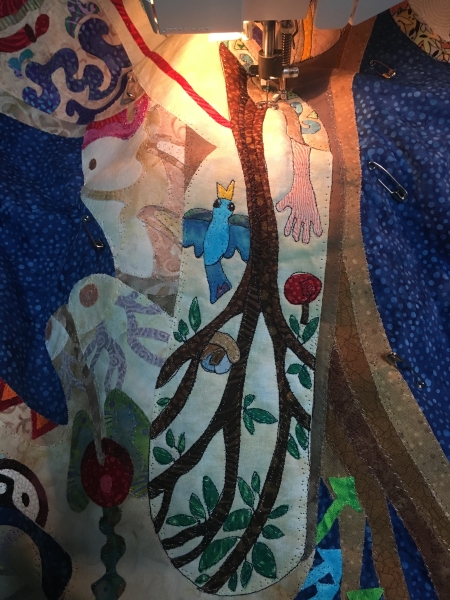 So I did lots of outlining… 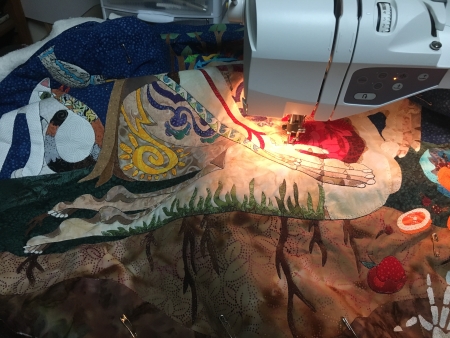 Fussy little bits, but satisfying to see them pop with the line. 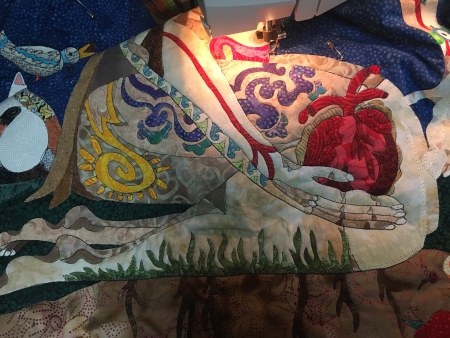 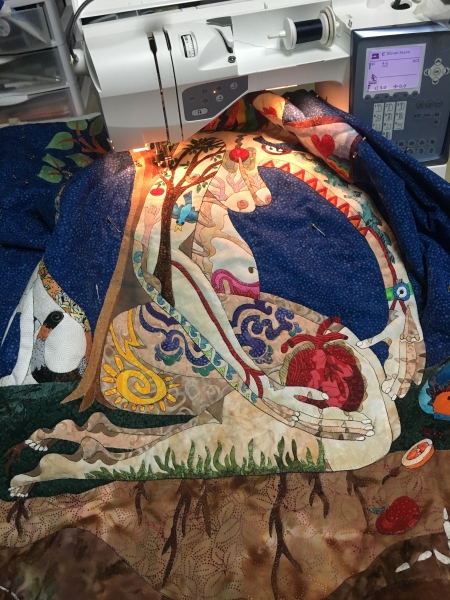 So she’s mostly done. I need to do her head and hair and the tree. I even checked my stash and I have thread that will work for the background. So after today (giving a test that has 9 stations of measurement that need managing, then getting a filling replaced), hopefully I will have the energy to finish the outlining and continue on to the background. Get it quilted by the weekend, trim it, find some binding (probably going to have to buy that), then have a do-over on the drawing for the next one…I’m looking forward to that one. Lots of things I care about going into that one. It’s not that I don’t care about this one…it’s just not an issue quilt, and I seem to like those better.

OK, work calls. Loudly. And my perfect cup of tea is now only lukewarm. Sigh.

One thought on “The Perfect Cup of Tea”