I’ve spent at least an hour in my head trying to figure out when to set up my classroom for tomorrow’s test. I need some of the materials on the desks for today, I have tutoring after school, and then chiropractor right after that. I guess it’s tomorrow morning. But that was the 4 AM brain. Like shut up, 4 AM brain. I could’ve figured that out today some time. I didn’t need to waste sleep time on that. Make good choices, man. Make good choices.

Speaking of good choices, I raced home from work and grabbed the dogs and the boychild and headed out. We have the outside edge of a tropical storm, was a hurricane, hanging around, making it muggy as shit and only 3 drops of rain are allowed to fall, which is crazy stupid. But the clouds look nice.

We took yet another weird trail. Boychild doesn’t like to do the same path every time. He blames Simba. Maybe the dogs don’t either. They want different smells. Interestingly, if we’d done our normal path, we would have passed the coyote we saw later as well. 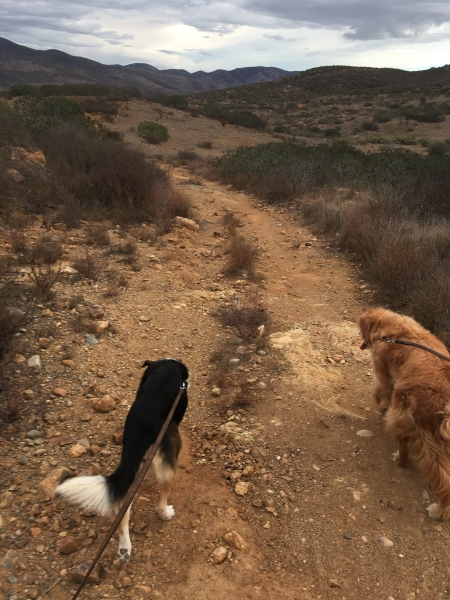 Instead, we kamikazed up this hill…and picked up part of a different trail…

But there he was, at the junction of the trail we’re normally on. I say he, like I did with the lizard, but maybe they’re both female. We just don’t know. 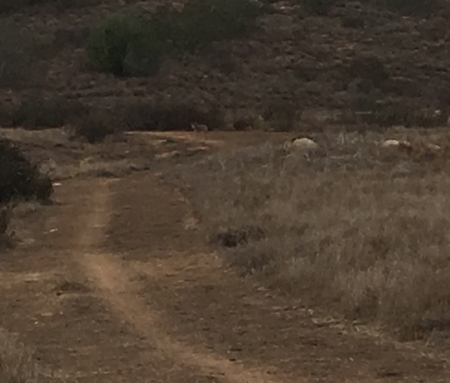 It’s closer than I like being to them (I’m sure they’re closer than that on a regular basis, but somehow it’s better when you can’t see them watching you)…especially with the snack we call Simba. It’s easier when I’m not alone though. He stopped and stared at us a lot. I waved and yelled hi.

Like you do. Hey Julie…does this belong out in the wild? There was more than one of them…the stem at back probably was the tall version before the flowers died. Lily-like.

Probably doesn’t belong, but who knows. I’ve seen stranger things out there.

I came home and was tired…we did more than we usually do, and I think I was already done in before I started. Lab days with water! Take your life into your own hands. Boychild cooked dinner…’twas good. Then I should have graded some, but I was too tired. Eventually I found the energy to come in here and start quilting…

But it took a long time to get the tension right, for some reason. I broke the thread like 4 times, re-threaded every time, changed out the needle, swore a bit, and finally got it functional…

After fighting with it for so long, I didn’t have much patience or energy for continuing to fight the quilt around the machine. I know I got in a little more than an hour though, so that’s progress. 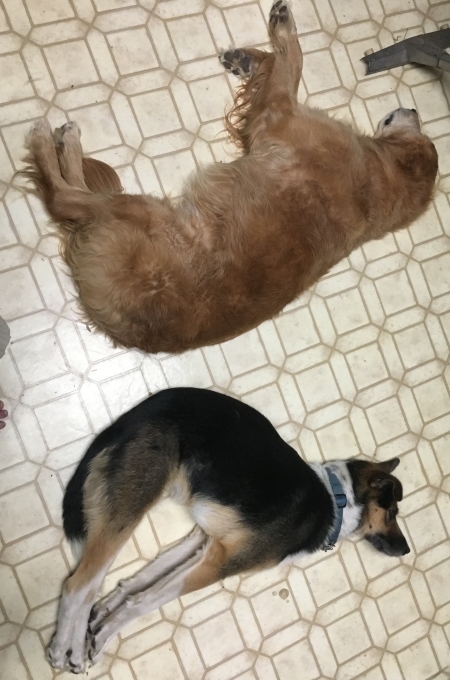 There was a cat in there too. And when I went into the other room, I had 4 out of the 5 with me…2 on the couch next to me. You cannot be alone in this house, not even in the bathroom.

Today is going to be a long day, but I’m hoping to get back in here and quilt some more. It’s honestly not very big, so it shouldn’t take very long. I’m not sure if I have thread for the background though. I should check that. Not right now, though. Right now, I need to get ready for work. Demo day…no down time. Fun stuff.