It’s one of those Saturdays where the to-do list looms large on the biggest post-it note you can find, but all I want to do is finish ironing fabric for the new quilt and maybe read my book. Yeah. Well. Welcome to adulthood. First on the list is trying to use up all the food my parents left here before absconding to Spain and Portugal for a million days. Luckily, the boychild is here and he has some of those Depression-era genes in him that allow one to use up ALL the foods in one or two meals. Except he doesn’t like lettuce, I think. So I’m in charge of eating lettuce. MMMM. Lettuce. Perhaps my compost pile needs some help.

What is on said to-do list? Well, grading, of course, and tending to money issues and the compost pile and making sure art paperwork is done or ready or shipped or something. Prepping for school for the next few weeks…I have a kid who will be gone for over a week and will miss every measurement lab we do, but still needs independent work and won’t have internet. And I don’t have a textbook. So there’s that. Fun stuff for a weekend. I’m on Day 3 of uncomfortable headaches that eventually go away. Ugh. Oh yeah, I also need to go shopping for small plastic animals that will fit in a graduated cylinder, but I forgot to bring the damn thing home, so I’ll have to go GET it, and then go shopping. I also think the Golden Retriever might be showing signs of diabetes, so I should set an appointment for her. Ugh. Meanwhile, where my diabetes numbers were looking good last week, this week they have sucked and besides being totally stressed out and exhausted, I’m not sure what was different. Damn pancreas. Behave, you bastard.

My goal is to kick a lot of the to-do list hard this morning and then find time to iron later today. And maybe even go for a walk. Although I won’t have any dogs. That might be better? I don’t know.

My office floor last night…only two…the other one is outside the door. I was grading before this. I made it through one small period and half of my most challenging period…it’s big and full of kids who are not great at English yet, so their writing is difficult to grade. Trying to be fair and helpful but realizing they can’t figure out a run-on sentence yet (I’m reteaching that on Monday…)…it just makes it hard to grade. I’ll finish today.

One cat hiding behind the monitor. I was doing work stuff on here. I think. And ordering stuff. Very important stuff, like the salmon oil for the old lady dog’s food, those things for my tooth flosser, and some sort of card for my computer that might help with the fucking slow internet. I still need to contact Tivo, but their call center is in the Philippines, and there’s a typhoon. Might be hard to get through. I know if I were in the Philippines and there were evacuations, the last thing I would wanna do is talk to some entitled white chick in California about why her Tivo won’t connect. 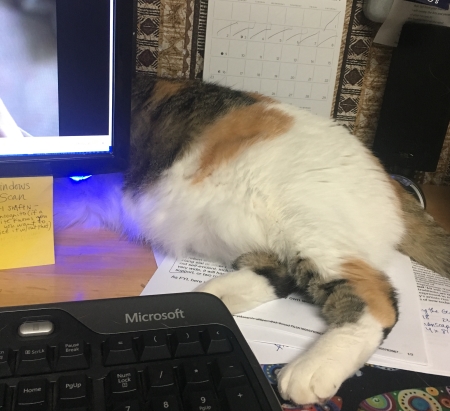 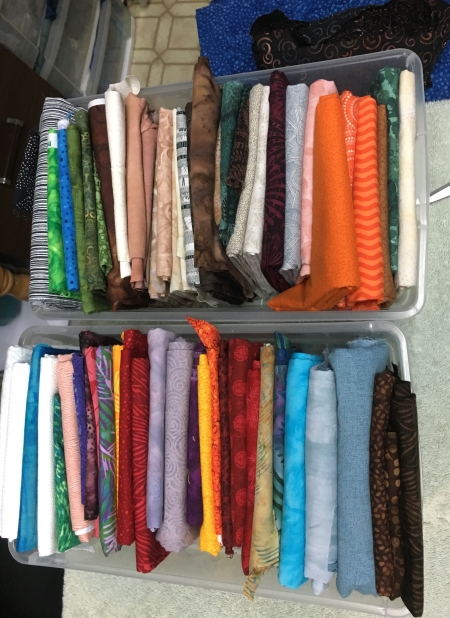 OK, it actually looks pretty chaotic now because I didn’t organize by color. My brain likes rainbow order. I can’t explain it.

A box full of pieces! I’m getting closer to done. I probably have about 100 pieces left to iron. I could easily kick that out today. That’s the plan too.

So the boychild was hacking things again. There’s a plan to get the overgrown jungle under control.

OMG. It’s a fence I haven’t seen in years. I’m not really sure what will happen to all this space once he’s done hacking at it. It might just be easier to find the little dog out there. I do feel sorry for the bunnies though. It’s gonna get scary for them.

Finally I managed to get a photo of all three dogs in one space. Not moving. This is harder than you might think. They know how to sit, but they are stubborn assholes and won’t listen.

We haven’t tried walking all three yet. I used to do it by myself. It’s doable. Pain in the butt, but doable.

OK, so grading and small-plastic-animal purchases and cleaning up and compost pile and hopefully ironing and who knows what else, but maybe Netflix could stop recommending YA movies that make me cry because I remember being that awkward and having so little confidence back then and it’s so much easier now to exist. Although I could do without the bills and taxes and the horrendous number of meetings I had to add to my schedule the other day (30. I had to add 30 meetings to my schedule.). Yeah. And I need a walk. A long one. With headphones. Maybe dogs.