Some Fridays are a surprise. I get to the end of the week and I’m not even mentally there yet. I still have energy and brain power. The weeks with back-to-school night in them? Yeah no. Friday is a blessing, but also it’s a good thing I will be sitting for most of the day (I’m demonstrating how to make a webpage), because I’m sorta dead on my feet right now. Too many meetings, too much jocularity with parents, not enough rest apparently, my body is sort of screaming that at the top of its lungs. OK OK. I hear you. You can sleep in tomorrow. I promise. Sunday too. I’ll be nice to you. Seriously, there’s enough sick people around that I need to promise the body something or it will succumb to some cold or sinusy thing that I really don’t want. I do have a sore throat, but that often happens after back-to-school night. Too much talking.

I came home to the boychild’s plant deconstruction. I haven’t had time to get my jungle under control for years, but this seems to be the year. We got some trees trimmed that were out of control (there’s more to come on that front, once I have a little more cash put away for the college costs), then went after the bougainvillea profusion, and now he’s on a roll with crazy-ass bushes…the trees have been dead since they did the septic field. We think we’re going to put a fence in here, just to block delivery-happy UPS guys who can’t figure out where my front door is.

And that hole goes into a part of the backyard that hasn’t been seen by anyone but dogs and bunnies for about 5 years, maybe longer.

Found? A dead tree, a statue of a cherub or something, a mop head…the normal stuff. Impressive work.

Meanwhile, I got home from back-to-school night after 6:30 PM. I spent over an hour on the phone with the cable company fixing modem issues, but unable to fix Tivo issues. We’re going to replace a cable and see if that helps, but if it doesn’t, then I have to go to war with Tivo, which apparently is not a good thing. Then I made the most simple dinner I could…read my book a bit…realized this piece needs to be in Houston by next Friday and I wasn’t likely to be LESS tired Friday night, so I got my butt moving, found the quilt, ironed it, labeled it, dehaired it, rolled it, packed it, and shipped it.

That was done around 10:30 PM. It was really hard to motivate myself to do it, but I’m glad I got it out of the way. It’s ready to go out this morning, so it’s out of my hair…unlike the 7 tons of grading I need to do. It’s only 80 videos, another 90 essays, this week’s warmups, two weeks of homework (the TA can do one of them, maybe both), and I don’t remember what else. Crawling under the desk with my computer now.

There are lots of animals here at the moment. They’re tolerating each other. This is how Kitten looks when Katie is here. It’s very judgy. 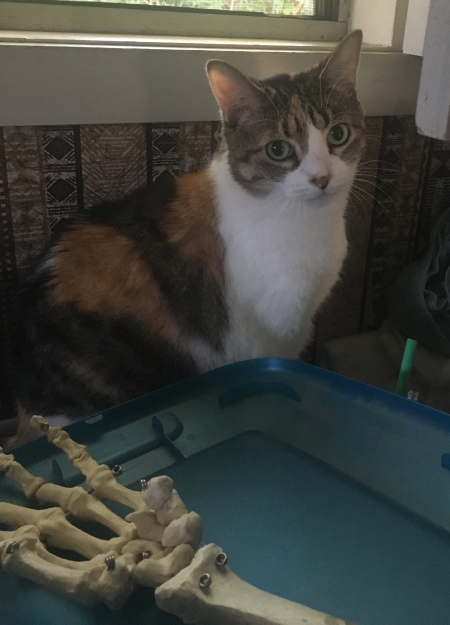 Yes, that’s a skelly hand. Why do you ask? I am a science teacher.

Boychild is trying to pet all three dogs at once. I’m trying to get them all in one photo and not blurry. I suck at my job. He does OK.

Satchemo is still not sure about Katie. It’s Day 1. Things will chill out. 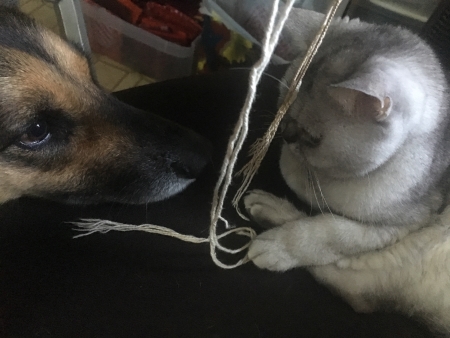 Meanwhile, my friend Ann, who moved far away long ago, happened to be near Walla Walla, WA, where The Nature of a Stitch is going on until December, and where my Disrupted is right now! So there they both are!

They both look awesome, and I’m so pleased that she sent photos. It looks like a great show. I wish I could see it…

The next show I’ll be at with my work is Things That Matter opening in Chandler, AZ, in November. Oh wait, that might not be true. I’ll probably be at the opening of Futurecraft at the Boehm Gallery, Palomar College, here in San Marcos, CA. That’s in October…I’ll be at the October 13th opening. I should put that on my calendar before I forget. Yeah.

OK, survival day. Followed by a decent night’s sleep. Next week will be so much easier than this one. Seriously. And tonight, I’ll be ironing again. That will be good.