Well this is what Friday of the first week of school feels like. That moment when you realize the kid who mouthed off to you yesterday is related to that other kid whose name is legend on campus, and not for good things. When you remember that you haven’t even started to deal with grades yet. That’s next week. Or the parent email. Also next week. Or morning and afternoon duty. NEXT WEEK. And you’re still tired. BUT! There was success last night.

I quilted for four hours last night. Granted, I didn’t walk around as much yesterday as I did the rest of this week, so my recovery time post-school was not as bad. Don’t get me wrong…I lolled around on the couch and read my book while drinking a cup of tea and contemplating how much my feet hurt. Sure. But I managed to get up and make dinner at a reasonable hour and then to go straight in to quilt. At one point, I told myself that when I ran out of thread next, I would go to bed (just before midnight), but at that point, I only had a section that was about 6″ high by 10″ wide to finish. So I did it. Which means yes, I went to bed too late. What’s new?

And then quilted the background…

I need to do some interior quilting in a couple places, but that won’t take more than 10 minutes, and most of that will be finding the thread. Then I’m done and on to trimming this beast and putting bindings on. I’m shopping after school today for binding, so I can toss the fabric in the wash when I get home. I’ll trim tonight and maybe start sewing the bindings on. Ahead of schedule! Which is a good thing.

All under Kitten’s watchful eye.

So I’ve been watching the bougainvillea we cut down to almost nothing…the last bush wasn’t showing any new growth until NOW…Oh yeah. It’s coming back. Woo! 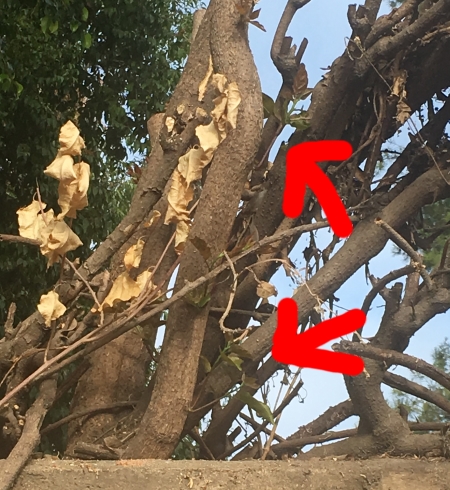 That’s in comparison to this overachiever. 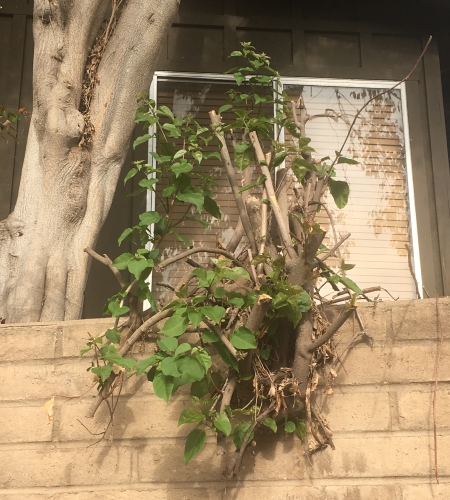 Good plants. Doing their jobs. Probably I should go in and trim off some more of the dead stuff before this one gets too boisterous.

I’m sensing a lot of sleep coming on this weekend (I hope) and getting some stuff done and maybe finishing another book (it’s about all my brain can handle sometimes). And I’m looking forward to sitting on the couch and doing some handsewing while mindlessly bingewatching television, hallelujah for Netflix etc. And I’m hiking. In the dark. Like you do. But now? I have to go to work. More tea please.

*Creedence Clearwater Revival, Down on the Corner