I didn’t get up early enough yesterday to write. I had to rush around dealing with animals. I went for my annual mammogram which was quick, easy, and painless. No really! It was. So I was convinced I’d have to go back in because they did it wrong. They also gave me this hairband for free. Apparently hair was getting into the scans and freaking out the radiologists, but they can’t reuse the hairbands. 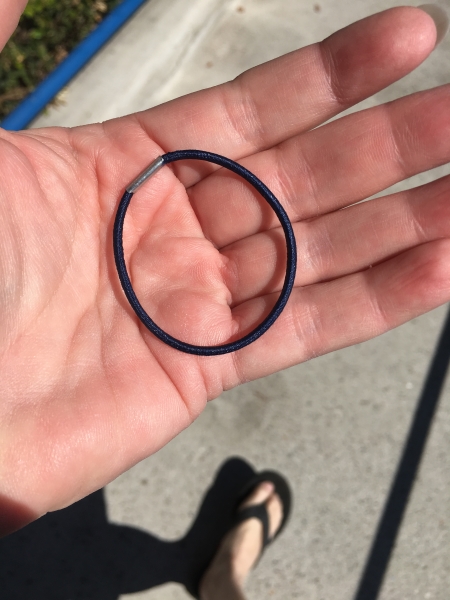 So I tried to give it back, because you know, medical waste, reduce costs. But no. It’s mine now. We squish your boobs? You get a hairband. And everything was fine. Cleared until next year. Thank you. 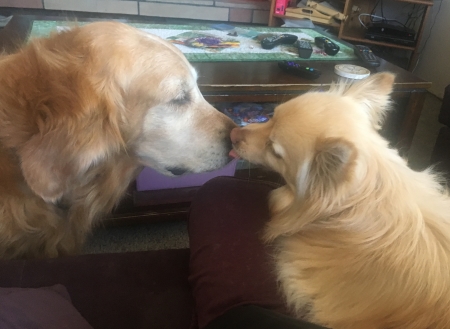 Satchemo sleeping on my quilting chair. So I didn’t quilt for a while, because…respect for cats.

And then I started on the background… 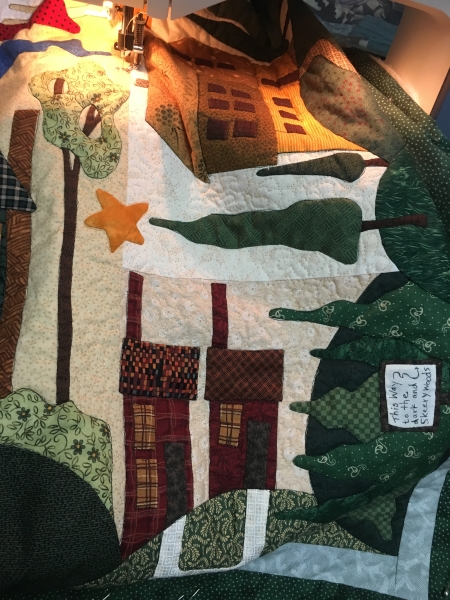 And then I took a picture of these beetles mating. 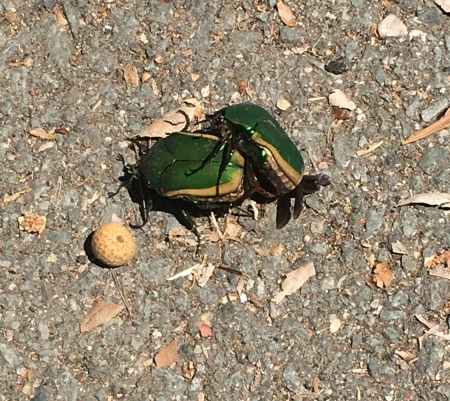 And went back to working on the background.

Sewing around these embroidered trees was a little hairy… 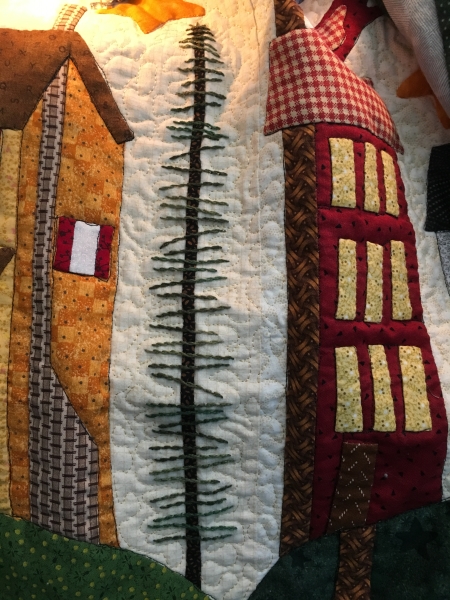 Then we went down to Campland on the Bay for the show…this was the view behind me. It actually got cold eventually.

I do know I would never ever camp here…they’re packed in like sardines. It’s crazy crowded. And a lot of people who are not necessarily my tribe…I can handle it for an evening, but all of those kids are gonna be up at 5 AM…right next to your head. No way. But it was fine for the evening…I finished the wild dog, although I need to comb his fringe.

And then I finally started doing these crazy flowers…I’m on the July blocks? I think? But the instructions for the flowers are in the January instructions…which live in a notebook. So I finally took a picture of the instructions, then read the two sets of instructions (because it’s not exactly the same) like 300 times, and then did it and went OOOOHHHH.

This is the man doing his best impression of an old man telling you to get off the lawn…he was looking at the view behind me and all the crazy shenanigans people were getting up to when you’re at an urban campground in San Diego on the 4th of July. 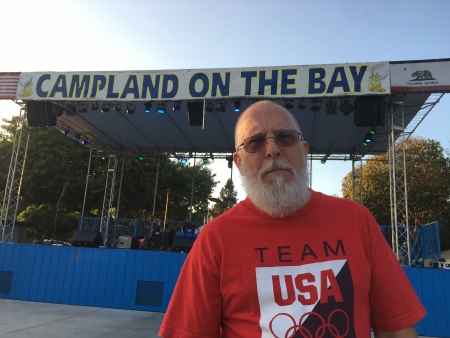 I just tried not to look. Although I faced that way so I could duck when the kickball was headed toward me. Plus so many ways to desecrate the flag…and I don’t really care about that, but oh my eyeballs. At some point, you just laugh and shake your head and be glad you get to leave at the end of the concert.

Later that night, behind me were a million people and eventually about 5 different fireworks displays, which was cool…

It’s still not as cool as having them right over you though. It was a good show. The food was eh. Remember that for next year.

Girlchild asked me for a picture of us from when she was little. I sent her this… 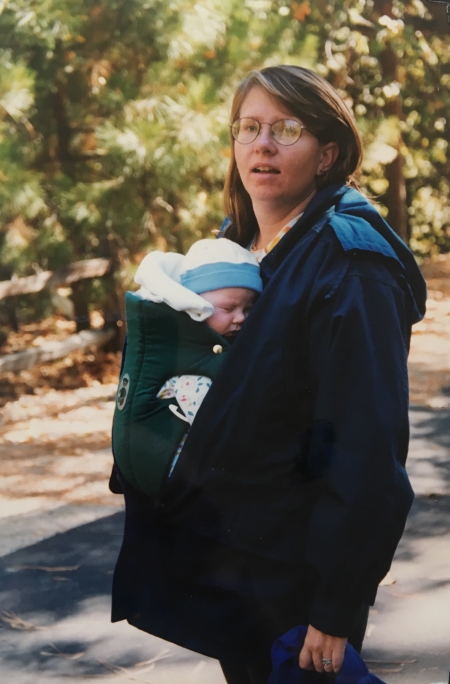 Mom on very little sleep…looks like Thanksgiving (jacket, up at the mountains), so she’s about 3 1/2 months old. Ugh. The tired years.

Not that I sleep well now.

So yesterday, after the boob squishing (yes I know my brain is all over the map. Welcome to Kathy on Summer), I went to a friend’s air-conditioned house yesterday and had a hot flash from hell (I’ve been having lots of them in the last few weeks), so she had to turn a fan on me as well. And then I got cold afterwards because menopausal bodies are fucking insane. But I was trying to do stitchdown on this quilt. Because I started looking at the calendar again and I’m being fucking inept this summer.

But my machine’s tension was being a cranky ass bitch. So I kept having to stop and rethread and try to persuade it to work. Very frustrating. I did get almost halfway up (basically I’m about to do the uterus). So that was good. But it’s so freakin’ hot today, I don’t know if I’ll get any more done. I do sit at the machine with a fan right on me, but ugh…doesn’t feel like enough. If I ever remodel this room, maybe it will get air conditioning. Maybe. Except SDG&E wants us to reduce electricity use today (it’s supposed to be either 106 or 109 degrees, depending on which weather app you look at).

Last night, I finally got some balls done…in fact, I finished all of the second color, which was the Pekinese stitch. So that’s 2 out of 6 colors done. 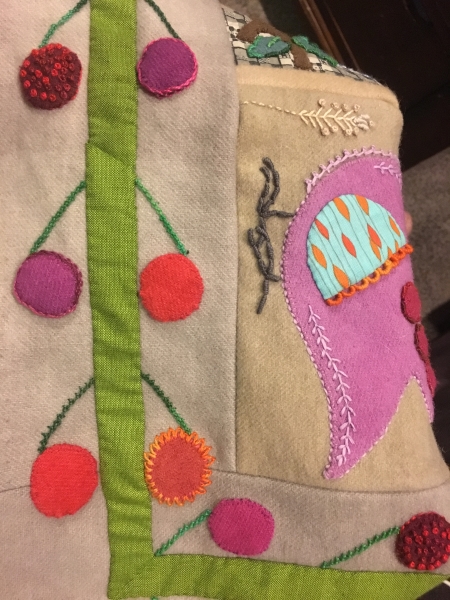 Seriously, the one next to it? Not orange. Blush. Ugh. Or maybe the pink one is blush. No, I think it’s pink. I don’t even know what the 6th color is. Whatever. No one but me (and Sue Spargo) will know. So not important.

Then my brain was hot and tired. But I didn’t want to not use the time. I feel like I’m losing time. So I stared at the blank sections of that drawing that’s been sitting on the light table for a long time, then figured out where to put the first line of waves (I’m taking two separate drawings that were put together in a long horizontal thing and I’m sort of stacking them and then adding and taking away). 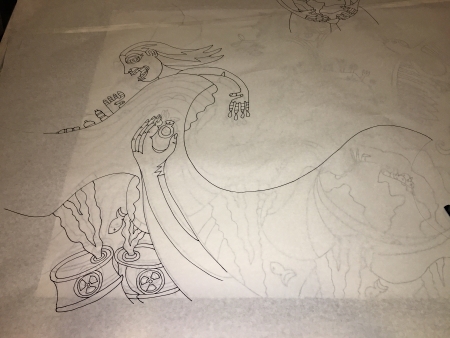 Then I traced in the female figure, the hand, and the oil drums from the old drawing. There’s more going in…most of this base drawing is getting tossed though. And I have to decide where the bottom is and what’s going on the hill above it. There’s a couple of issues going on in the drawing…obviously some women’s issues, but also environmental. Currently it’s named Womanscape, but I don’t know if that will stick. Remind me when I don’t remember what I called it.

OK, today I am working for a while on actual school stuff, and then going into survival mode from excessive heat. I do have a pool…I wonder if I can put the sewing machine on a float. Except there’s a foot pedal. Hmmm. I need an engineering brain for this shit.