A reminder that working all day does suck up brain time and make art difficult. That said, I do it. I used to only really make art on breaks…so Winter, Spring, and Summer. I finished about one big quilt a year and a few smaller ones in between. I didn’t do nothing during the school year…I just didn’t do a lot. It didn’t help that I had little kids and they had homework and soccer and piano lessons and a whole host of other things that I graded through and sometimes embroidered or appliqued through, but that was mostly hobby stuff…not the real artwork. Looking back, I’m not sure how I got anything done. But I did.

Yesterday? Not so much. I mean I did get some stuff done, but it was a lot of tiredness mostly. Because when I got home, I made dinner and then walked the dogs… 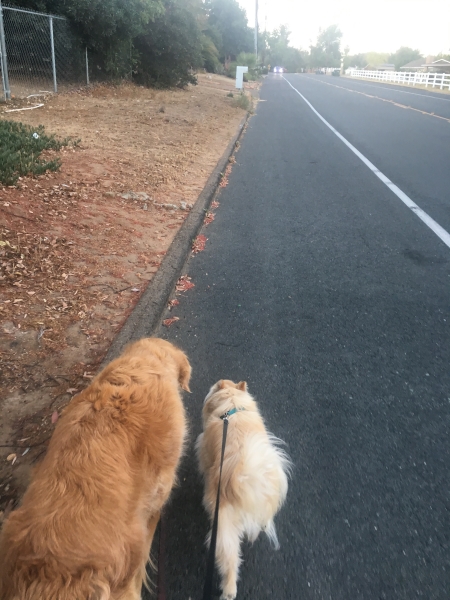 No nature last night…because it was late and I didn’t want to deal with coyotes. I did want to get exercise, because sitting all day in a training feels exhausting as well. Although I did find a place that makes and sells (important!) tea. Oh hallelujah. So that got me through yesterday afternoon. One more day today and I’m done. I can honestly say that National Board Certification is a lot of work…but I think I will take it on…just not this year.

On the walk, there was a kid who was walking, but when he realized that the dogs and I might be walking faster than him, he took off at a run. Like he couldn’t get passed up by the old lady. He’s way up there in the picture…you can’t see him, but he’s walking again. Lame. Nice big old field though. Everything is dead and brown already…no rain for a while.

Calli appreciated the walk but was tired and hot afterwards…

Simba also appreciated it, although he appreciated less my picking the sticks and foxtails out of his fur later. And Satchemo didn’t get to go. He does go out on a leash, but I don’t deal with that crazy. Cats on leashes. Yeah no.

I realized I wouldn’t be able to stand to iron for an hour or more…too tired. Feet hurt. Even though I sat all day…the irony! I usually stand all day. And I didn’t feel like stitching on balls. I looked at them and rejected them. So much for three a night, eh?

Oh well, so I have to do these two small art quilts by late July for an exhibit in the fall, so I’ve been carrying around these 5×6″ pieces of paper I cut for that purpose. So I drew. And then as I drew, I realized the boxes are horizontal and I had drawn the first two vertical. Duh. So I redrew one of them (and changed it), but now horizontal… 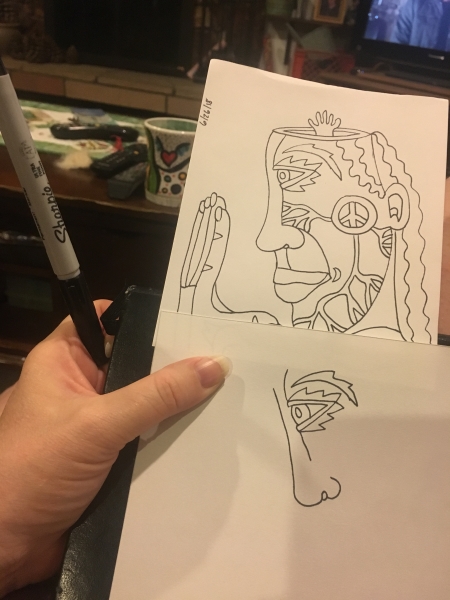 And then I decided I like the one in the top left, so I scanned it and shrunk it and printed it out again. So it will be that one and the bottom right. 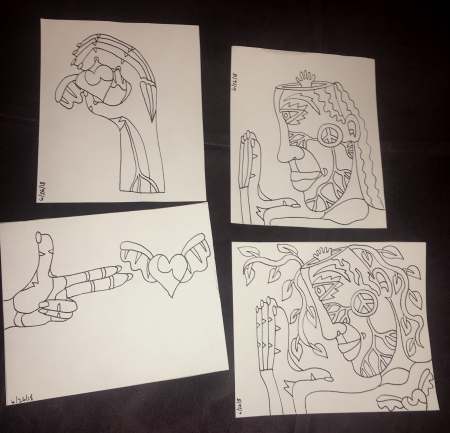 I’m pretty sure I’ll be able to keep these little pieces after the show…maybe toss them up on Etsy.

So that’s what I did instead of finishing the ironing on this quilt that needs to be done. I also thought about (but did nothing about) the big drawing…mostly because I think I decided I would need to be standing to do anything about it.

I can’t decide whether to start with a drawing in the big sketchbook and then enlarge and add to it, or whether I know what the parts are already…just cut a big piece of paper (I have a HUGE roll of paper I bought a while back and it lives in my living room and no, you can’t have any…ok that sounds mean, but you know how when people find out you have something or you can do something? And then they want it or they want you to do it and you’re like wait but get your own. Do it yourself. OK, I’m obviously in a mood. Never mind. Something about a comment…”is anyone an artist?” came up when we needed to make a poster.). Cut a big piece of paper and start drawing on that. That decision (and action) was more than I could deal with last night. So I didn’t. I’ll get to everything. I hope. I committed to a piece of art that goes with a poem…picked one of my old poems, the one that sucked the least (damn, some of my old poetry was really awful). So I need to draw that too. Maybe tonight? Ugh. Maybe. I want to draw. I’m just tired.