A Sunday without planning for school. Again. So delightful. No school worries. Although I’m in teacher professional development for the next three days, so that’s not really no school. But they will feed me. And hopefully it will be informational and useful and not just annoying overachievers. We’ll see. I think I use up all my people skills (what few I have) on my students all year. I need to rebuild those reserves. Maybe hanging out with teachers I don’t know for three days is not the way to do that…but who knows? Maybe I’ll be totally reflective and motivated.

Right now, I think I need a nap. The mockingbird is back. He’s been all over the neighborhood, but last night was in the tree outside my bedroom again. It makes me crazy. I slept with the pillow over my head. Drowning out noise with fabric and feathers. Ironic that. Bird drowning out bird. Very philosophical this morning.

I have this drawing I’m contemplating. I started it years ago, 2012? And it grew, but I’m not sure it grew logically, and it means something different to me now. I was going to just go with it and maybe add to the bottom, but now that doesn’t make sense to me. I thought about just using half of it, but every time I look at it, I see pieces I like and pieces I don’t like, that don’t go with the story as it is now. So I think I’m going to redraw it but move pieces around…make it less horizontal too while I’m at it. 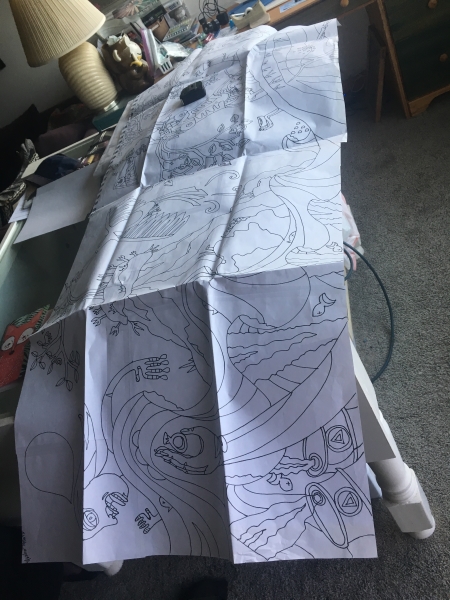 It’s going to be my epic summer quilt. But first I have to tear this apart and redo the whole thing. No Biggie! It’s taken me a week of contemplating it and deadlines to finally make the decision. So redraw it I will.

But let’s go back…it’s been a busy two days. I had a voucher at the local ceramic painting place that was expiring, so me and a million moms and kids headed to the same place to use them up. No one would sit at my table…which was fine by me…but I got side-eyed by about a million people for painting nudes I guess… 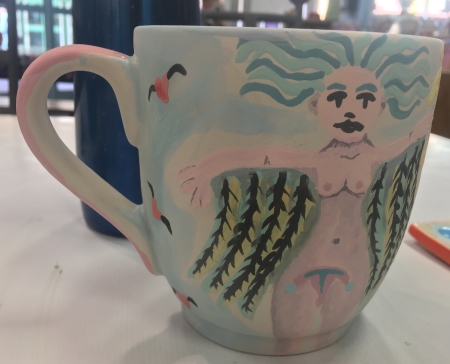 These are before firing, of course…who knows what they will look like fired.

Well, we all will next week when I pick them up. I make about one mug a year…I tend to break them. Overuse them. All that. 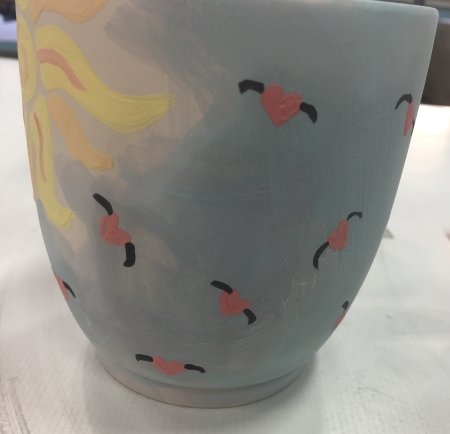 I also made a uterus bowl…like you do…

With a lot of symbols on the outside. 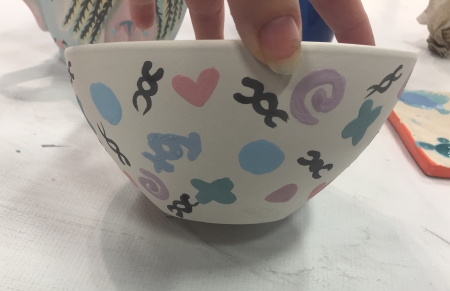 And then I made a sign for Saturday’s march to keep families together. But that was once I came home and made dinner…I didn’t do that at the ceramics place.

San Diego had already scheduled a march for the 23rd and then the national one came through for the 30th. I already have stuff going on the 30th, so I’m just doing the one march…hope the second one pulls enough people to make a difference too.

I saw this cool sculpture walking to my meeting spot…

And then lots of speeches (too many speeches, honestly) and a short march to the federal building…

It’s frustrating to live in a time when we have to yell and stomp so much for our government to hear us…and they still blow us off. Sigh.

When I got back, my brother was texting me pictures of the boychild with his cousins…going tree climbing. 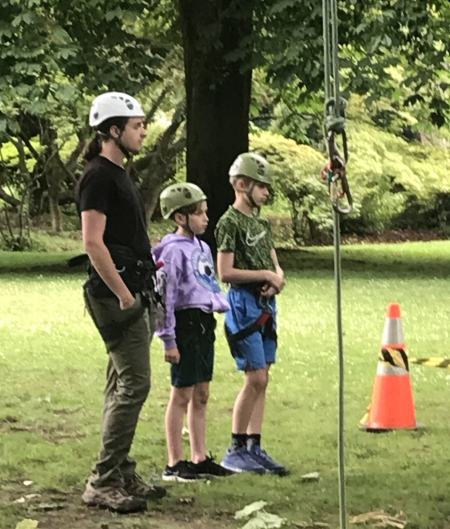 My kid is the biggest…so far. The others are getting taller every time I see them.

Mine is the long one in the middle…

Looks like fun. I wanna do that. I kinda miss those summers when I would drag the kids up to Seattle to hang out for a week.

Anyway, boychild will be leaving Monday apparently to head south. He should be here in a week or so. So that means cleaning his room. It’s not too bad. I piled the worst of it in the girlchild’s room last year when my guy moved in here and I hadn’t finished cleaning up stuff in my bedroom. Sometimes I just don’t know what to do with stuff. I’m not sure if I need it or not and I hate throwing things away. I threw a lot away last summer with the garage clean out. I think I reached a limit at some point.

Anyway, that’s next week. And sometime in July, when I panic about the girlchild coming home.

Meanwhile, my office is always a disaster…but especially after I’ve picked all the fabrics and haven’t cleaned up yet…I leave everything out in case I lose a piece (I found a lost one last night)…there’s a cat in this photo…

There it is. Kitten on Mt. Batting. 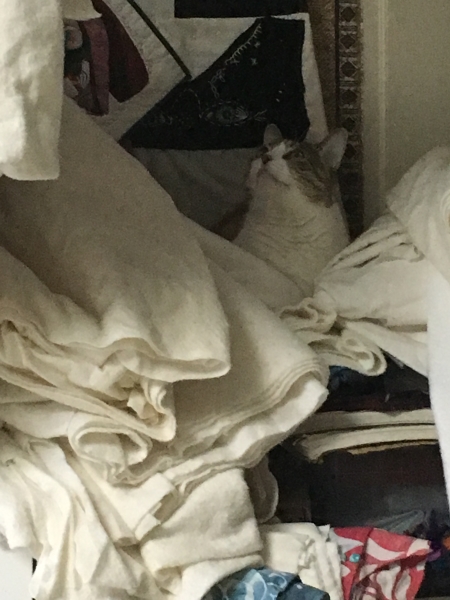 So at some point yesterday I felt awake enough to iron for a while, up into the thighs. The sun comes in here in the afternoon and makes it hard to see stuff.

And then I took a break for a while and went to dinner and then came back and worked on the lights and the squeegee and the uterus…not all of that is ironed down though, because stuff is supposed to go behind the top part of the pelvic girdle… 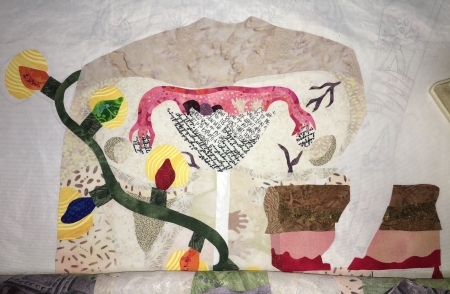 Kitten came down to visit (and watch Supernatural apparently)…she sat on the chair that is hidden there for a while, until the other cat came in and got territorial. Sigh. At this point, I had cleaned about half the papers that were piled on my desk…I still have the other side and then the desk to the left. School sucks up so much time that there are balls that just drop…and cleaning the paper crap up is part of that. So I lose shows sometimes in the paper piles. I forget about them. I try to be logical, but I’m not always good at it. I want to try a different organization plan in here, but I need a new stacking file thing…the two I have don’t fit into each other unfortunately. So that’s a trip somewhere. Organization has been my issue my entire life. I like it when it happens, but I keep changing how I do stuff to try to get MORE organized, and then I wait to see what sticks. I’ve reorganized in my office/studio about 3000 times. I have a plan for hopefully next summer (need money) to do a remodel of the whole room…but I’m not there yet.

Anyway, I was ironing the gingko leaves separately, because they had a lot of tiny pieces and I needed to see the pattern before I ironed them onto the belly fabric. 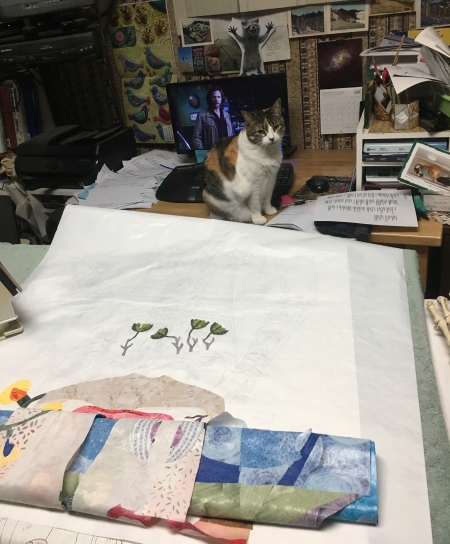 And then I put them on the belly fabric, but folded the leaf itself down until the stuff above was done…first a stomach, liver, and intestines…

And then the ribs and abs…then I could iron the gingkos all the way down. I still need to add a bunch of detail bits in there, but it was just after midnight at that point. I took a break in the middle because the library emailed me that my book was due soon, so I finished it…plus my feet hurt from standing, so I gave them a break. 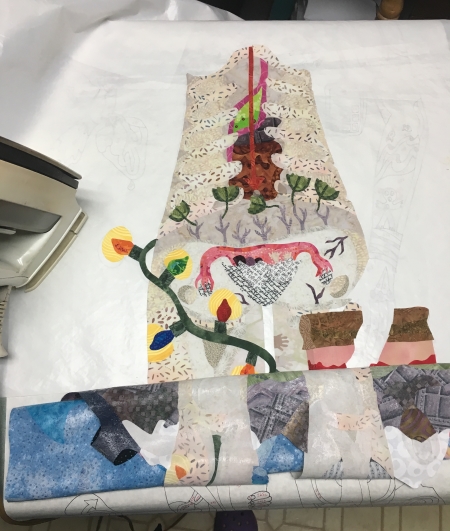 I’m officially more than halfway done now…lots of complicated stuff still to be ironed. You can see all the bottom bits are rolled up at the bottom. I decided to just keep going instead of ironing the parts separately and trying to fit them together at the end. Especially with the hand that will come down and hold the squeegee…I wanted to make sure everything meets up.

Oh yeah, I finished all the red balls on this quilt and started doing the embellishment of the fuschia balls, which are only a slightly different color than the blush pink balls (there’s one of those on the top for comparison). The stitch around the fuschia balls is fairly easy, but requires going around twice. I only did one…I took time Friday night to finish the 4 red ones that were left and start the fuschia, which is why I got no artmaking done. Plus tired. 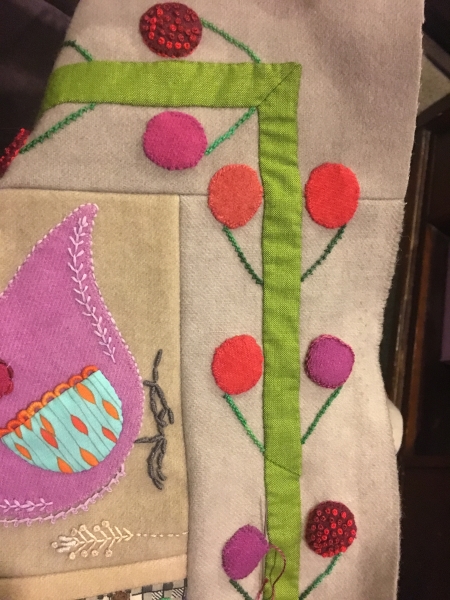 I made up for it by doing no ball stitching last night…but I figure if I finish embellishing 3 balls a night on average and there are 80 (79) left to go, then that’s 26 nights. So sometime in July. Plus I should be quilting the other wool quilt, but I have to finish the cotton one that’s under the machine, and ain’t none of that happening in the next three days. So there.

So there’s finishing ironing, maybe quilting, getting prepped for tomorrow’s teacher PD, groceries, maybe a dog walk…if it cools down enough. Maybe some cleaning or organization. We’ll see. Yardwork that’s never done. EVER. One week of summer break gone. I hate that feeling. Then I have to persuade myself that there’s a ton left, everything will be fine, don’t panic. DRAWING. I need to draw. That’s a plan…I like having a plan…