Well, the best-laid plans…you know the rest. Yes, the phone has a new battery…that’s the good news. The bad news was the camera has dust in it and they won’t just clean it out (ugh) and I had to drive to the Apple store twice yesterday, which is not a short distance from here. I survived, of course…even hit monster steps hiking all the way across the mall (fast, without stopping for anything, I hate malls) twice. Or four times, depending on how you look at it. I have today to survive (it’s another hike-across-town day…too many errands), then I need to come home and do laundry and pack, so I can get up in the middle of the night and leave town. I’m trying not to panic about getting grades done…or the next quilt, because I was strangely (WTF was I thinking?) believing I could finish tracing Wonder Under last night. What was I smoking? (I don’t smoke…)

So after dinner and running around the house looking for stuff I’m supposed to take with me (I always take kiddie scissors on the plane and couldn’t find mine, but then ended up finding two OTHER pairs of kiddie scissors AND the two tweezers I’d lost. So now I have three tweezers…is it PAIRS of tweezers or SETS of tweezers or just TWEEZERS plural? What is WRONG with me?), I finally got around to tracing Wonder Under at like 10:30. That was not my plan, but it is what happened.

I forgot to photograph the other fabrics I bought when I got the binding fabric. 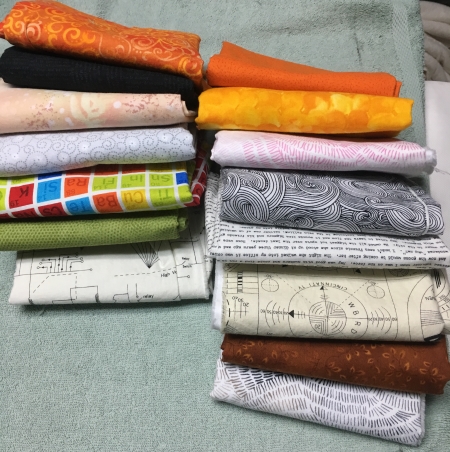 I’m actually incapable of buying JUST the binding fabric. It’s crazy to do that. CRAAZY. Probably explains my stash. I don’t actually buy a ton of fabric a year…as you saw on the last one, I’m trying to use up my stash for backings…I do buy backgrounds, sometimes more than one because I can’t decide…but this time, I just bought one. And one binding. And those. Above. Yeah. Well. I like words and weird diagrams and I always need good yellows and pinks and grays and that periodic table just cried out and that brown is a really nice red-brown shade, like the green is a nice mellow medium green. So there’s that.

This is puppy’s face when he might be in trouble. 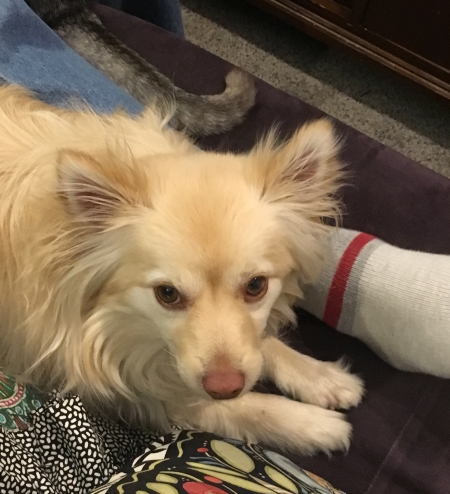 Notice the person’s sock and the cat’s tail. There were some inappropriate puppy actions going on. He gets snarly.

So back to the tracing. I think I hoped for another 2 1/2 hours last night, but honestly, I don’t think that would have done it anyway. There’s actually 904 pieces, not 800 and something…plus the little ones sometimes take longer to trace. 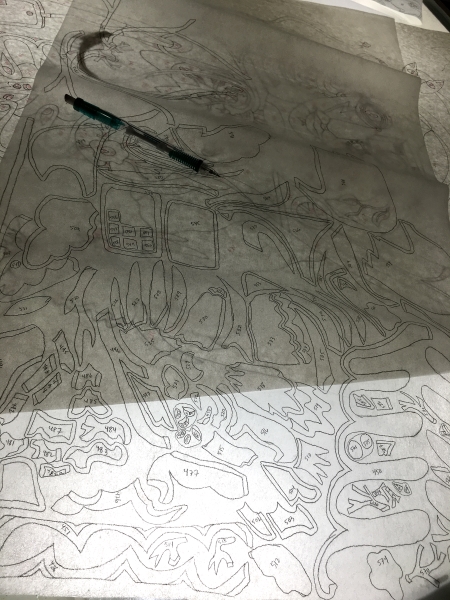 So even though I did the iPhone and the bird carrying the heart and the entire chest with heart and lungs and veins and arteries, I didn’t get a ton done…I’m at piece 627…so 270 or so pieces left. And that’s a good 3 hours. And I don’t have 3 hours tonight. I need to go to bed early and try to sleep so I can function tomorrow. I suck at sleep, as you well know, and going to bed early is usually a no-go…plus I have to pack and all that crap, so I’m already pushed for time. I may not be able to trace at all tonight…or sleep (oh my, laughing semi-hysterically at that one).

Although tracing is the one thing that’s helping me not grind my teeth at the moment. Does this look like an octopus to you? Well it’s a lot of octopus pieces… 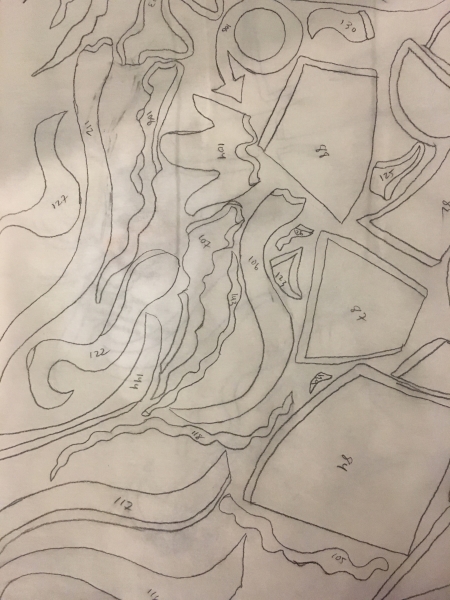 There’s two yards laid out…mostly. I’m still on the 3rd piece…the bottom one is not filled…but there are big arm pieces next and so I’ll need a 4th yard of Wonder Under to get it all done. At least. 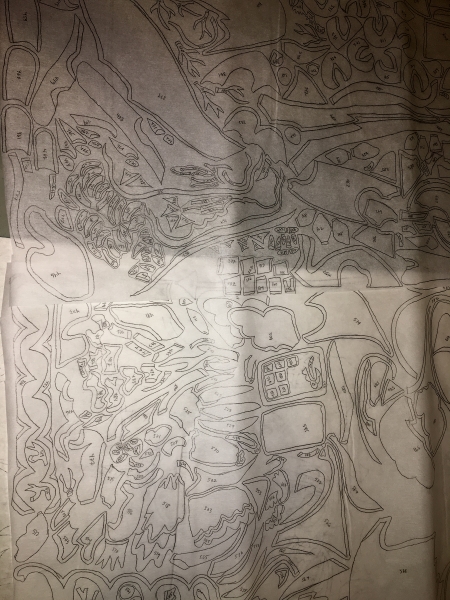 And since I won’t be home until late on Monday night, odds are I won’t get anything else done until Tuesday next week. It’s OK. If it doesn’t get done in time, it will still get done and it will still be an awesome quilt. I’m cool with that. Doesn’t mean I won’t go for it…it’s just not going to be the end of the world if I don’t meet that deadline.