So I’m set up to deliver the last quilt to the photographer on Thursday, so he can work his magic over the weekend. The deadline is next week, so I’m good. Then I’m going to fly out to see the boychild graduate. It’s a weird feeling to get to that point, not as weird as sending him off to college in the first place, but certainly feeling like OK, that’s it (except it’s not…it never is). I’m proud of him, of both my kids. They work hard. Neither is perfect, but they adult well…hopefully the next steps will work out for them, for what they want. That’s the hard part, though…looking back at my own existence. There were times when the shit was easy, and there were times when stuff was amazing, but there’s hard stuff too. Life is just that. How to get the moments of joy or even just peace out of having to work for a living and clean up cat poop and rush to the hospital and get cars fixed. All that crap. I’m trying to deal with some life insurance stuff, and honestly, I think it’s not really an issue right now, and it’s certainly not something I NEED to deal with while I’m trying to get through the end of school, but try explaining that to insurance agents. Whatever. I just don’t answer the phone (I can’t answer the phone during the day most of the time anyway). I’ll deal with it over the summer. Same with the lawyer I need to talk to. And a bunch of other stuff. It’s hard to look at your kids though and want them to have an easier time of it…it’s not something I can control…can’t even control my own life. I guess there’s a drawing or 10 hiding in that.

I woke up with a monster of a headache and realized I was running out of meds for that. Ugh. Nice start. Early meeting today and then math testing, science meeting, Apple store to try and deal with my dying battery issue. Long day. Come home, dehair and iron the newest quilt and pack it up for the photographer. Buy pain meds. Pack for the trip. Write sub plans. Watch about 5 1/2 hours of videos of students.

But meanwhile, there’s another deadline. There are always deadlines. I should find a way to get them out of my head. Although I’ve been making some amazing pieces on deadlines lately. I wonder if the frenetic need to make is related to work stress. Probably. My reaction is to come home and put my head in art-brain space. I’ve been averaging 15-20 hours a week of art since Spring Break. That’s on top of my 60-hour-a-week job. Yeah. A little nuts. But those 15-20 hours are the ones that keep me sane at this time of year.

So I had already started tracing this one a few weeks back…not sure why…just needed a break. Or I was already mentally debating quitting on the first one, because I didn’t think I could finish it. And then I finished it. So I was already in the 200s in tracing, which is good. I keep forgetting to keep track of where I stopped, but I know last night I finished the legs, did the pubic area, and then the entire abdomen area, intestines and all. 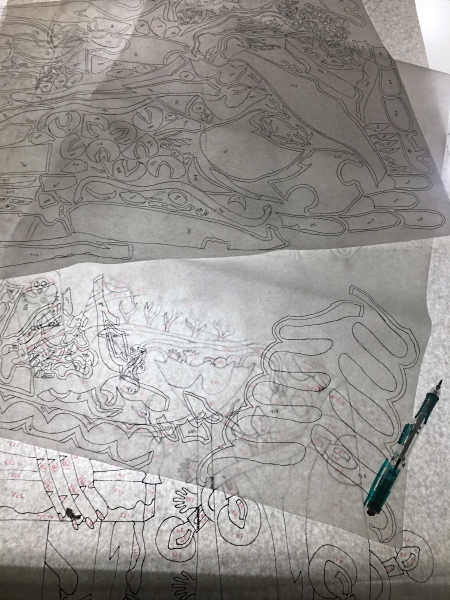 I just started the third yard of Wonder Under. I found 8 pieces I hadn’t numbered…they’re now lettered. But I also found a skip from 370 to 380…so there’s 10 pieces that don’t exist. My brain sometimes…I made it into the 500s. I think there’s only 800 and something pieces in this, so I could finish tonight…maybe. Like I said, long day, already got the headache. But there’s a chance of finishing. I traced for 2 1/2 hours tonight. More realistically, I will probably finish tomorrow night and start cutting out, although tomorrow, I need to go to bed early, so I can get up before it makes sense, fly across the country, and see my kids.

This is what it looks like late at night when Calli wants you to get up and take her out to pee. She sits there until you do it. 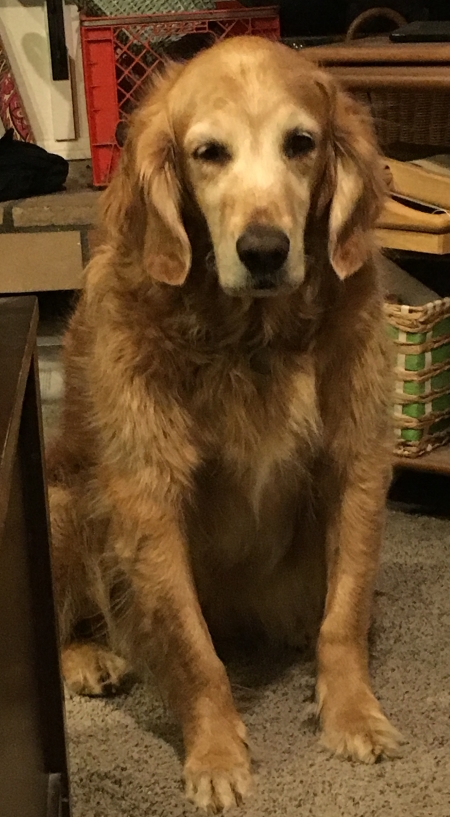 She is a good girl.

This is what I’ve been dealing with in sex ed.

I’m still trying to figure out how Yes Means Yes is math. Either he’s a genius or he has a massive learning disorder. I actually do know which it is…I’m just still boggling over that one and the card where a kid asked me if once you had the sex to make the baby, if you wanted another baby, did you have to do the sex again.

Taking my headache to school, where hopefully it will run off in terror.