The first week back to school after a break is always hard. This one seems to be chock full of meetings and other afterschool stuff, which just makes it harder. I’ve needed to go to the chiropractor for days, but had to reschedule to pick up my car, and now it’s gotten worse. Today is the day! Hooray! Tonight is also an art opening. Yesterday was book club…there was a lot of discussion about the characters and the world the book was written in…The Fifth Season by N.K. Jemison. 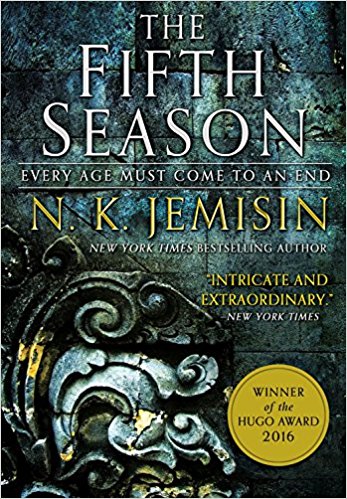 I used to do book reviews on here all the time. I don’t know why I got out of the habit. I still read all the time. Anyway, this book was good, good enough for me to read the whole thing in about 3 days flat over break (while driving around New Mexico and Arizona), mostly because I panicked and realized book club was this week. There’s a lot of interesting geological science in the book, obviously from a fantasy/sci fi viewpoint, plus some version of a post-apocalyptic/dystopian future. All the good things! And the 2nd book is already available…I think the 3rd book is out as well.

I also started (and finished) Every Heart a Doorway, by Seanan McGuire, which is a pretty trite title for a kind of dark little book. It’s short and not sweet, but definitely an interesting read.

I know I’ve read something from McGuire before, but I don’t even remember why this was on my list (probably someone at book club mentioned it and I requested it from the library). Honestly, at the beginning of break, every book I’d requested from the library showed up at once, so I had to re-request two of them, and this was one of them. It’s about, well, wayward children, but those who go into different worlds and then fall out of them for a variety of reasons and can’t figure out how to get back. It’s a fast read.

I now have two books (only!) on the library app. And about 2 weeks to read both.

Last night, when I got back from book club, I was too tired to engage the drawing brain, so I finished the McGuire book and started a new one, a Louise Erdrich book (been reading her for years). It’s not like I have tons of time to read…I have to usually choose between reading or art, which might be why I’m reading less than I used to. I miss it. I miss sitting around on the couch for a couple of hours, immersed in a novel. So often these days when I try to do that, I fall asleep. Or I feel guilty because I know I should be grading. I didn’t grade yesterday because I had a union meeting and I was making a slide presentation for today so I wouldn’t have to write the same stuff 5 times. Grading is kicking my butt right now. I can’t find the time.

Did I tell you my sleep apnea study was fine? I sleep normal…for me. Which is badly. Unless I’m on the couch trying to read a book. Then I sleep fine. Although I woke up to the sneezy cat on my chest.

Anyway, after tonight’s opening, I’m hoping I have the energy to come home and work on the drawing. I miss making art when I don’t do it. It makes the next work day harder. I feel emptier. So I guess reading fills the space with a story right then and there, but art makes me feel like I accomplished something, that I’m making something, and that’s somehow more important to me. Good to know.

One thought on “Today I Read”