‘Tis chilly here in sunny San Diego…some random cold front making it colder than Ithaca, NY, where the boychild is, but probably just for today. I’m pretty sure that will change soon enough. Cold enough to make me a dog sandwich on the couch, a cat sandwich in bed, though. Amazing how close they’ll get when it’s really chilly. 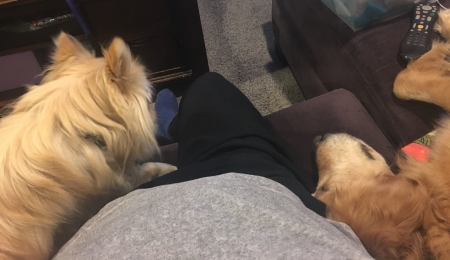 Yes, I actually cut stuff out with the two of them like that. It wasn’t easy. I’m used to one box on either side of me and one on my lap. Instead the boxes were precariously perched on either side of dogs who move erratically.

Earlier, I graded…because that’s all I ever do…and this one was already half in my spot. She didn’t move until bedtime.

It was a frustrating day at school. Independent thinking is probably not best achieved on the first day back after a three-day weekend. I still remember what happened Friday, but not so my little chickadees. And even once I got them through a review, then I wanted them to come up with categories. Oh My Goodness. You’d think I had asked them to cure cancer. In my top class, chock full of honors students, I got one table with three categories: True, False, and IDK. Um. Ladies. They’re all true. LAME. It’s OK…today they will have to use what they did to make more sense of the world. I’m just damn cruel that way.

So yeah, I graded because grades are due soon and I know I will run out of time. I always do.

But I also was done with grading and dinner and all that dishery (I even cleaned a bathroom…just one and not the floor) around 9:30 PM or so and I did a few drawings in between cutting out the last of the pieces. 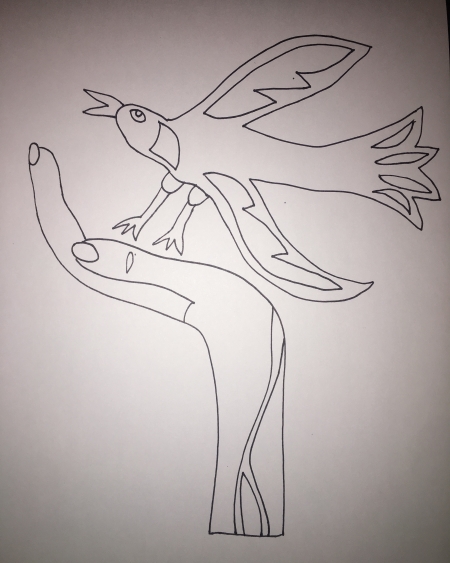 I did about 2 hours of trimming last night to finish up everything…with a total of 9 1/2 hours into the process. Box on top is the trash. I’m putting it in a ziplock bag with the trimmings from the LAST quilt and mailing them to someone whose address I saved (seriously, I did…). Box on the bottom will get sorted into bins tonight for ironing probably tomorrow night. 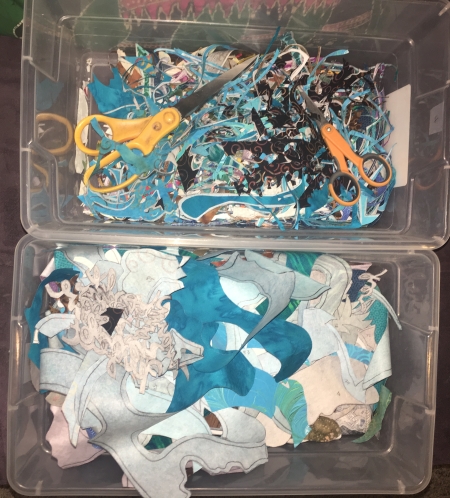 I have book club tonight, so I will go out and socialize with my tribe. Plus I read the book. So that’s a plus.

Girlchild has some access to Messenger this week, although she is back to camping in the wilds of Madagascar. On the beach. Near a hotel. Where no one likes to go.

It looks somewhat like my Spring Break trip to the redwoods last year…except the trees are smaller. 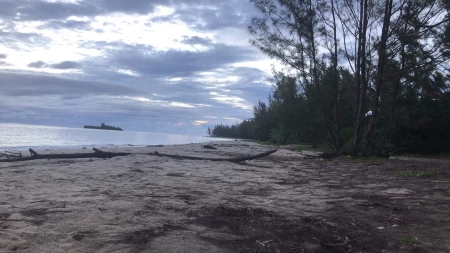 They seem to take care of the kids…unlike my group when I went abroad in college, which flew me to London and kept me there for about 3 days, but then sent me off to the wilds of Aberystwyth with zero support…although I think they gave us Thanksgiving dinner…that’s something. I guess we were less likely to die of a nasty disease in Wales. And they apparently spoke English there, although some days that was questionable.

Anyway, today I throw cellular respiration into the mix. That should make smoothies of my students’ brains. It’s OK…they’ll survive. I might not.

*Tom Waits, All the World Is Green