Still tired. Seems puppy has forgotten how to not bark all night. I got the spray bottle and dragged my poor tired old body out of bed about 5 times until he stopped. Even with the coyotes, I’m like, dude, seriously, they’re outside. They’re not even right outside the window, slobbering on the glass. They’re like across a major road. No worries, OK? He grumbled a lot (he really does make a grumbling sound) and turned around on his bed a bunch and yipped a few times, but then either I slept through the rest (not likely) or he stopped.

I think about what I do with the dog and what I do at school with kids, and sometimes there’s not a whole lot of difference. There are kids who have forgotten (sometimes purposefully) how to do their work, how to turn it in, how to stay on task, and I have to stand on them. Not literally, but constantly remind them of what I expect until I get it. Or don’t. Because that happens too. Projects are cool because we see all this great thinking, but also incredibly frustrating, because a lot of our kids can’t handle a project, even when we break it down into daily steps. I walked around yesterday to every table and commented on one single part of the assignment: “You did it. Awesome!” or “You didn’t reply.” or “You haven’t done any of it.” There was very little surprise with the last one…the first one made a lot of kids happy or incredulous that their tablemate had done it. The middle one just caused arguments, “Yes I did.” Try again.

Anyway, today is the last day. They are supposed to do videos today…I’ve already deleted about 5 of them that were way too short. They will love me for that, I guess. I did email them and tell them why. If I don’t delete them, they usually won’t go redo them. “I did it already!” is what I’ll hear. They have the time to redo them…they need to learn that skill, the redo skill. Fixing things!

Anyway, it’s a long time until Spring Break…I can feel it in the air…the kids’ brains disappearing even though they’ve got 6 weeks to get through…us too, I guess.

Yesterday was long and exhausting. I had before-school meetings and after-school appointments and meetings. I took two quilts with me to my stitching meeting so I could do bindings. I was sure I’d be able to finish at least one, but I was sewing way too slowly…and I was late getting there, etc. etc. I have this much binding left…

From the top down that side and barely around the corner. Of course, then I have two sleeves to sew on as well. But it’s almost done. Honestly I haven’t been working too hard on getting these done, obviously.

I also entered a show last night. I had debated it for a while, but I had a piece that seemed it might work, so I went for it.

Then I debated. I was way too tired to stand…and I’d made some significant brain errors yesterday due to tiredness, so I didn’t feel like ironing. I mean, I WANT to iron…I was just too tired at 10 PM to start. And I knew this week would probably go that way…it’s why I pushed to get started on the ironing earlier in the week. I’m hoping to get some done this weekend.

So I sat on the couch with a couple of animals, including this big goofball. “See my toy? Do you see my toy? I have a toy.” Yes Calli. We all see your toy. 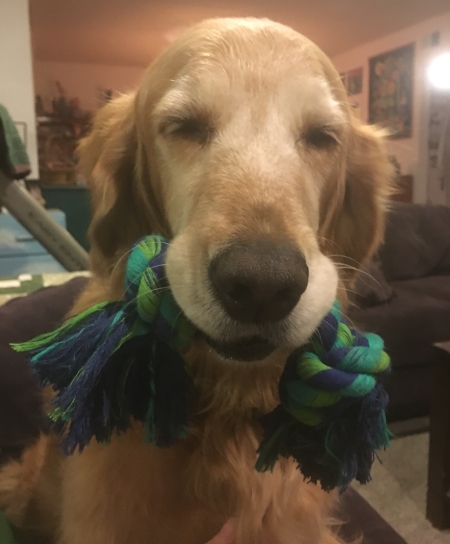 And I took the drawing from the staff meeting earlier this week, and I drew it bigger and added a head. So it didn’t turn out like I wanted it too (I wanted 5 heads, but I ran out of paper space…a common problem for me), but I just kept adding shit until I thought I was done. It was a good thing to get out of my head. 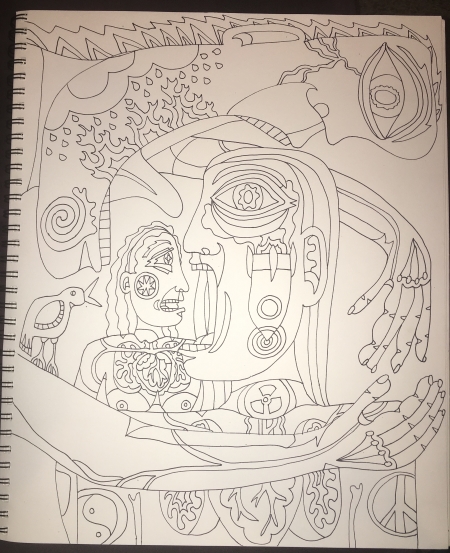 I might need to do another one at some point, but this was cathartic for now. Back to the question…are they yelling at each other or trying to eat each other? I don’t know the answer to that. I guess to get 5 heads in there, I’m gonna have to start much much smaller. Good to know that too.

I have gaming tonight, so I know I won’t get to ironing…but I’m hoping I get a good night’s sleep. I do have to deliver a quilt tomorrow, so I should figure out where it is, dehair it, iron it maybe, and pack it up for delivery. That would be smart. And then a 3-day weekend, with at least one full day of grading stuff, but a big chunk of ironing as well…I need that. More fabric meditation.