Well. I tried sleeping with the pillow over my head to shut the rain up (seriously, it’s not white noise to some of us) and then the wind picked up at 3 AM, so I’m not sure how much sleep I actually got around all that natural shit that we need to fall from the sky because drought. Always the drought. We’ve only had an inch of rain total (including last night) since July, so it really is a dry year…or a normal year, with last year as the crazy outlier. Half our students won’t show up today because of the weather, although a few little guys showed up yesterday…this is the first year we’ve started with kids on Tuesday instead of Monday. The district just wants us to have more and more professional development, and this is one of the ways they try to make it happen. It was good, because we got a lot of choice time instead of enforced crap…my coteacher and I did some planning and hopefully will get caught up. By June. Maybe.

And remember how I told you that school makes me more artistically efficient? I wonder if it’s because the non-art part of my brain is exhausted and dead when I get home, so the art part can run rampant. It really is about shutting that part up sometimes (just like I have to shut the art part up at school)…so I do think that is a factor. It’s OK…I’ll never be able to afford to retire, so I won’t have to worry about how I will make art when I’m old without the work distraction.

It was already starting to rain when I got home, but I knew the dogs needed exercise, so I leashed them up and literally dragged them out there. Well, the little one needed some significant persuasion. He kept looking back where he thought the dry car might be, and broke into a run at the end. The old lady does what she’s told. She gives me a look when it starts raining really hard, but otherwise, she’s just happy to be out there…

It wasn’t too bad most of the way, but they were pretty wet when I got back…

We did a short version, because it was raining pretty hard on the back end.

Puppy needed comfort from someone besides me when we got back.

Mean old lady makes me go outside in this weather.

After that, I did a little ironing on this piece…there’s really no excuse for not getting it done. It’s small and easy. Nice filler when my brain isn’t quite ready for drawing.

We’re watching one episode of Stranger Things a night with dinner…so when I finish eating, I’m working on the SJSA blocks until the episode finishes…this herringbone is going much faster than the buttonhole was…honestly, it’s not the stitch; this glue isn’t as hard to stitch through. 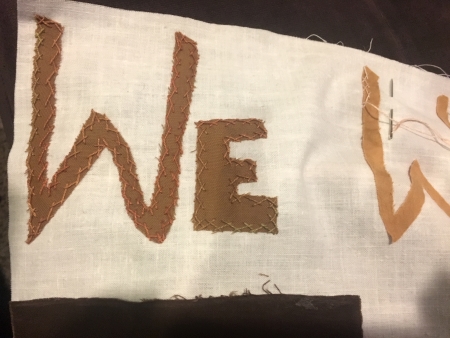 This is what I finished the night before on whatever this is. Some bovine. I worked on it at my parents’…briefly.

Then I went back to ironing after dinner.

A totally different direction…there’s a world under them. I think I’m going to have to expand it a little at the top. But I think this is going to work. It was much easier to draw this…I don’t know why. Anyway. 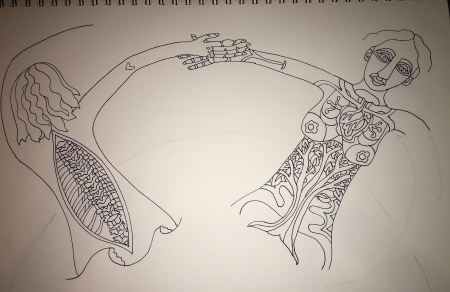 I’m hoping this one works out. I’ll finish drawing tonight, or as much as I can without extending it. I have a lot more stuff to put in it…of course! I like to fill space. You may have noticed that.

Anyway, let’s hope parents get their kids to school today, plus I survive it, so I can come home and iron a bit and draw a lot and sleep better than last night. I can do one shitty night, but two might hurt.

Drawing the vaccination path in my arm... #drawing #covidvaccine
Stitching by hand (machine is in the shop). #artquilt #quiltart #amhappliquestories