Happy Candy Day to those who celebrate it. Being a teacher today is not always the easiest thing in the world. Actually, tomorrow is worse for candy and trash. Fridays for Halloween are always best. They have the whole weekend to eat all their candy and get tired of it before coming back to school.

That said, we get to dress up…not much this year, but a little. I had an idea but then lost my roll. Oh well. It’s also the last day of the month, which means it’s almost November…that’s crazy. October is usually one of the longest months of the year, but I feel like I took a breath and it’s gone. I guess the plus is that I have some vacation days coming up, so more artmaking! Yay. Looking forward to that.

So I graded last night…I’ve been super efficient lately, so that’s nice. It feels better than being really behind.

We have a sick kitty, so there was some time last night trying to assess what her issue is and how emergency-like it is. I’m still not sure. I know the vet closes early today, so I’ll have to go tomorrow. Sigh. She’s not a happy kitty, but I can’t really say what’s wrong. And they’ll ask about her eating and peeing, and this is the cat I never see eating or peeing. She’s very secretive. Strangely, I thought she was only 10 years old, but when I was checking my records, she’s actually 12…going on 13. Yikes. So I freaked out about that for a while, because I haven’t had a lot of cats live past 13. It’s like finding out your parents were 90 years old when you were sure they were only 60. Whoops. I’m a space cadet. Anyway, lots of pets for Midnight and hopefully we’ll figure out what’s bugging her and it will be simple…after $500 of blood tests, because you know that’s how it goes.

My ex exercised the puppy yesterday afternoon, so he was asleep on my shoulder while I was worrying some of that out last night. 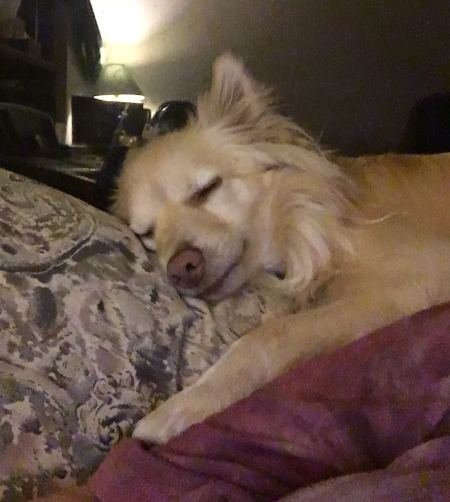 I did some more on the left…fly stitches… 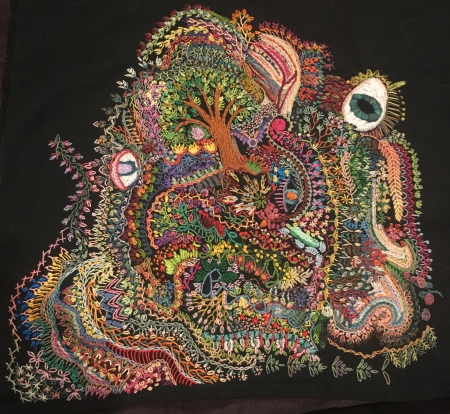 Trying to make a shape that can be enclosed in a crazy quilt in some way. Not sure how I’m going to do that. I don’t have to know until January 1.

When my brain eventually started to behave, I grabbed the enlargements I made after school. I did one set at 250% and then realized how big the main head would be and sized it down to 200%.

Then I cut and pasted them together…they actually fit pretty well for once. I’m not even sure why sometimes it’s better than others. It could literally just be the copier I picked…or it could be some other variable. But here’s 200%… 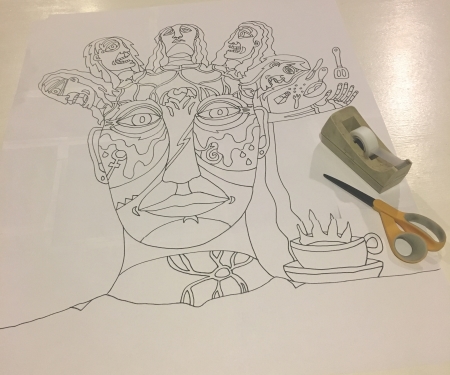 The group I’m making this for is called Things That Matter…and I’m focusing on women’s issues again for this one. It needs to be at least 60″ wide, so I added paper on all sides to make the head not quite in the center. There’s more below her than above her. 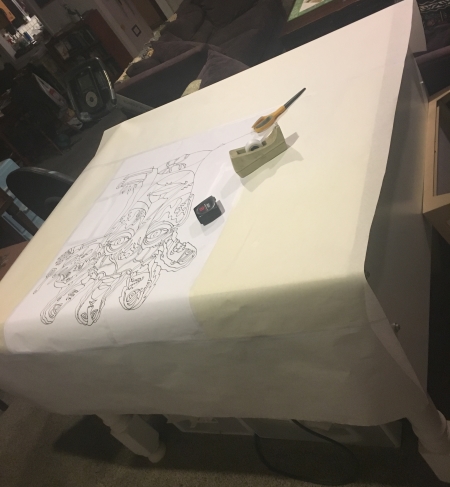 I knew I wanted a nursing baby, so I penciled that in. I don’t always draw directly with Sharpie. At this size, there’s a lot of pencil that happens. 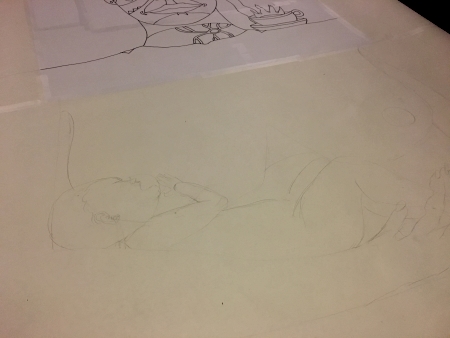 Then I inked in some of the basic shapes. 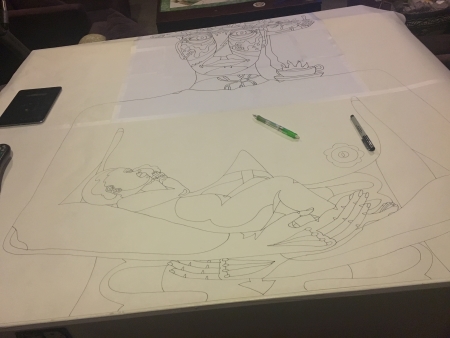 I’m just getting started. That was about an hour last night of drawing. I’m still letting the sides and upper area (above the shoulders) percolate. There are a lot of things in my head. As always. I’m tired of all the attacks on women in the last years, especially this year. It’s exhausting. I even had a student tell me that men work harder than women. This is a kid who is majorly failing. A boy. He said women can’t be scientists because they don’t work hard enough. I love it when a 12-year-old is sexist like that. Then I had to explain sexism, because they thought I said sexy. Whoa. No 12-year-old is sexy…sorry. Not to adults. Unless there’s something wrong with them. So that was a fun moment.