Well. Some days one’s plans do not follow one’s plan. It is what it is. I’m grateful that I’m not in the middle of hurricane wreckage or fire danger. Although I keep looking at the sky for some evidence of fire…must be training after the last two big fires down here. There are so many disasters at the moment that it’s hard to know what to support, where to send whatever it is one can send. I did just add wildfires to the next quilt list of ideas. Certainly the amount of plant growth we had in the last year because of all the rain might have been a factor in how out of control these fires were. Although if these were human-set fires, that’s a whole ‘nother level of crazy with which I can’t deal. Humans are pretty fucked-up creatures.

So with all the fuckedupedness swirling around in my brain (that IS a word), I left school yesterday to buy binding fabric for this quilt. It didn’t take long to find one that worked…and a few others, because I like fabric. You might have noticed. 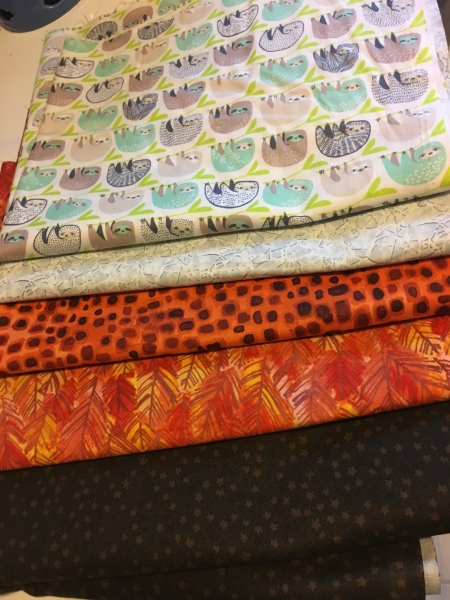 The bottom one is the binding. The top one is sloths. I have no need for sloth fabric. Except sloths. Yes. So that explains a small portion of my stash. And now that I have the orange fabrics home, I think I already have the top one. Sigh.

So I was supposed to come home, eat, and go to the gym, and that all fell to hell at some point. So I graded shit for about 3 hours…well, and dealt with union stuff. I’m pretty sure there was something else I was supposed to do, but whatever. Sometimes that’s just the way shit works out. I think I figured I’d rather grade all that stuff LAST night than tonight. Although I will probably still grade tonight. The never-ending spew of assignments that need attention. The plus is that when I personally counsel kids, they turn shit in. The minus is the spew of emails and stuff that needs 7 clicks to access instead of 1 because it was late.

Anyway, this happened around 10 PM…I hate trimming quilts. It’s a pain in the ass. Some part of me just wants to hack haphazardly at the edges and come what may. And then the ordered part of my brain that wants the focus on the image, not the edges, comes in with the rotary cutter, kneels down on the floor at 10 PM, and carefully cuts, straightens, and measures until it’s square. Not square in shape, but sides perpendicular and square edges. 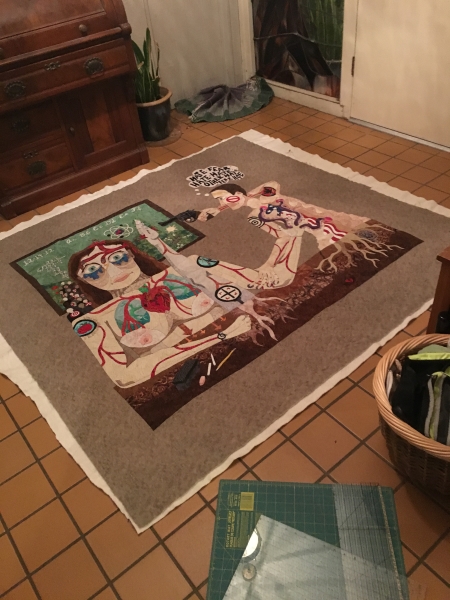 She’s about 62 x 67″ I think now, finished. The plan tonight is to get the binding on. And email the photographer? I know I want to ink this one too. We’ll see how far I get tonight…I might have another plan that keeps me from getting far on this.

So this year at school…we did a lot of planning last year. This year, we’re tweaking stuff. That means supplementing some of last year’s stuff so we can make sure kids understand the concepts. We were lucky to get a big chunk of money last year for materials and equipment…and we’re making sure we use it. So today, we’ll be doing a demo with some elements, showing the kids some of the physical and chemical changes that can happen to certain types of elements. 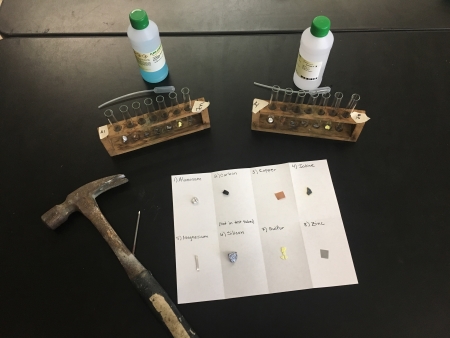 And we made a video (well, my coteacher is putting all the clips together into a video) so the kids who were absent can watch what happened…so the workload is still pretty hefty at the moment. In fact, the next unit barely exists, because we didn’t need to teach it to last year’s kids…they got it in 6th grade. So we need to make that happen somehow. I can’t say it’s easier than last year…well, maybe it is, but it’s still pretty time-consuming. I can tell you that dropping acid on metal is fun and so is hitting charcoal with a hammer. I do have a strange job some days. From personal counseling of about 50 kids to hammering elements.

OK. Thinking good (although mostly useless) thoughts about Northern California…and Puerto Rico (because the president won’t)…and everyone who is losing health insurance and Las Vegas, damn the gun people, and anyone else who is staring at their news feed like I am and wondering why. At least it’s Friday. Peace out my loves. But first, this might help…