Hello morning. You are way too dark and you came too early. Ha. Ha ha. Oh dear, my head is not pleased with the lack of sleep. It will have to deal…because…I finished quilting! It was (apparently) loud and fast, but a little over 2 hours later, I was done with the background and all the weird little spaces and the one bit of outlining I missed and the green of the chalkboard. It took a little over 13 hours to quilt the whole thing…less than I thought, but I think that’s because I really did try to reduce the detail in this one to get it done in time.

I was successful. Good to know.

Working on the eyeball still. I’m not sure what I’m going to do when I finish the sclera. Maybe just sew flowers all around it. 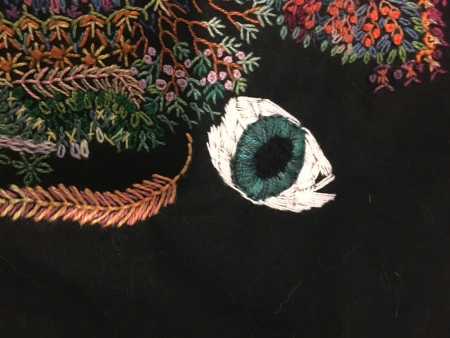 We’ll see. Ha. Ha ha. Eyeball. Get it? See? Yeah. Brain. Thanks. My early morning brain is a punny teenager.

Even Midnight doesn’t think it’s funny. Sometimes she gives me these looks while I’m quilting and I think I’ve greatly offended her. This is one of those looks.

Really it was just a lot of beige on beige. 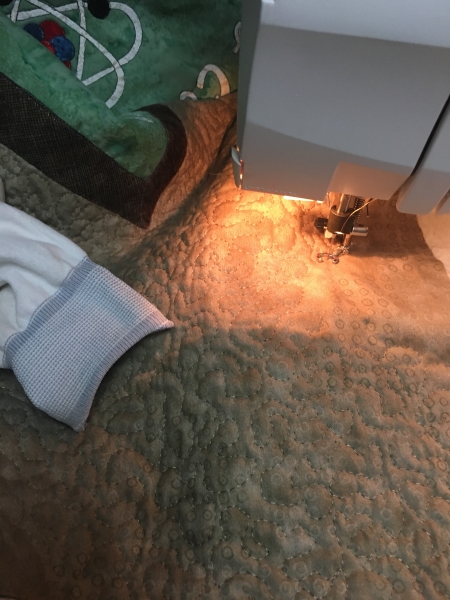 I think that’s the first beige quilt I’ve ever done.

I had a few of these little filler spaces to go back and quilt. The last fiddly bits are always the biggest pain in the ass. 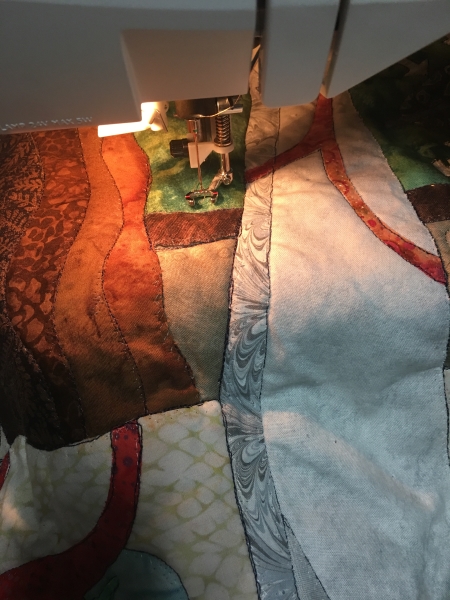 The back. The light color is the chalkboard, which I didn’t quilt tightly at all. It needed some quilting, but not a lot. The crazy stuff on the right is quilting around the atom model.

I laid it out for binding measurements and to do a rough check that I hadn’t missed some totally obvious thing I was supposed to quilt. 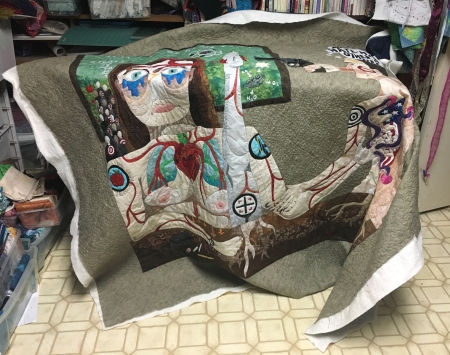 The sucker is big…currently about 70×65″…but it will trim down a bit.

I’m not uber-fussy about the quilting. Some people are into very tight quilting, but it’s usually part of their finished image, how they want it to look. I want the fabric to be the image…the quilting works as a drawing line with the outlining, and then to make the background recede…and to hold the damn thing together…but I’m not a fancy quilter. I don’t think my quilts need it.

There’s the atom from the front. I was lucky and had a green thread that worked well with both greens of the chalkboard.

Today I buy binding fabric and get the binding sewn on so I can do the handwork. That’s going to take about a million years and I have so much grading to do still. Ugh. Oh well. I will be getting it done this weekend. I should email the photographer, right? And then start trying to mentally process the next big one…the due date is a while out, but it’s a big one, so I need to be realistic. Whatever that means. Because I’m a little crazy when it comes to making these sometimes. I do love making them though…even when it hurts to look at them. That’s probably a good thing.