I’m ready to be Australia. Well. Except for some of the crazy bugs and spiders. Y’all can keep those. But let’s hand in all the guns. I think the biggest obstacles are the politicians who are more worried about their jobs than their constituents. No automatic or semi-automatic weapons…can you really argue that we need those? You do realize people in Australia can still own a gun, right? There are just strict rules for how and what. I have no problems with strict rules. Can you argue that your right to protect yourself is more important than my approximately 3,300 students’ (over 15 years) right to live? Or the 58 people who died in Vegas? Or the 49 who died in Orlando? Or any young black man wearing a hoodie?

The plus is that I finished stitching down the anti-gun quilt. Let’s be clear…my quilt is Anti-GUN. Because we don’t need them. Not in the numbers we have them. Not for what they’re being used for. Not. I just (in less than 5 minutes) contacted my three federal representatives. Told them to stand up and create legislation and keep fighting for it until it passes. Start there. You can do that.

She wants to know why I’m not petting her. And then why I’m not throwing the ball faster.

Still working on the eyeball in the top right. It doesn’t look like much right now.

Then I stitched. Well, I made dinner first. And finished my book…The Long Way to a Small Angry Planet. I liked it. And then I read some Goodreads reviews and felt bad for liking it. And then decided those people had no lives and I was allowed to like it. So there.

Sometimes I really hate America for its aggressive patriotism. I’ve been told so many times to LEAVE because I don’t agree with the majority…and I explain that is why we are here…because our ancestors didn’t agree with the majority and needed to flee…so we took over someone else’s country in a particularly nasty and violent way (somehow it was our inalienable right? I don’t think so…). So I mostly write off anyone who tells me I’m not patriotic when I object…it’s the core part of our country. I’m allowed. 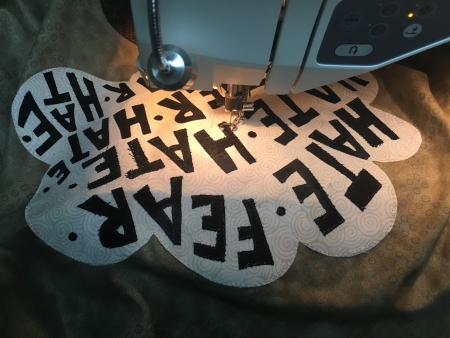 In a society that appreciates that. Yesterday, in the assignment we’re doing in class, I had told each class “no weapons” for their element superhero. One class started to argue…and I turned and said, “Really? After Las Vegas, you’re going to argue that you need weapons? Solve the problem without them. That’s what I want to see.”

Seriously. America. Solve the problem without guns. Do it. You know you can. We have some of the best brains in the world. Use Them. If you’re a politician scared for your job, then GOOD. Do it anyway. It’s worth it.

I did finish the stitch down, just short of 6 hours.

The face of gun violence here in America…tonight I’ll sandwich it and pinbaste it…maybe even start quilting. We’ll see. Meanwhile, I started reading a book about violence in Africa. Maybe I should look for something lighter after that.

One thought on “I Can’t Operate on This Failure*”