Yesterday, I sewed. Not a lot. I also cleaned some stuff and organized some shit and moved some crap around and booked flights for the kids and I don’t even know what else, but I also sewed. I kinda wanted to see what it looked like when I sewed, so I figured out a way to prop the phone tripod on my bosom (yes, I just typed that…laughing while I did it, but for realz, that’s what I did) so I could do just that. Here it is…

And all I can say is wow…no wonder I’ve sewn through my finger more than once. Yup. I sew like I drive, I guess. Except fewer driving accidents than sewing ones, honestly. It’s very strange to watch one do things that one has been doing since one was 10 years old. Seriously…I’ve been sewing on a machine for 40 years. Wow. Long time. Longer than I’ve been doing most things.

So I started the meditative stitchdown in the afternoon and got the entire bottom section done…more later today…that’s the plan anyway. I’ve got errands to do first.

It’s fast because there’s not a lot of pieces or detail, but not REALLY fast, because everything is very big. 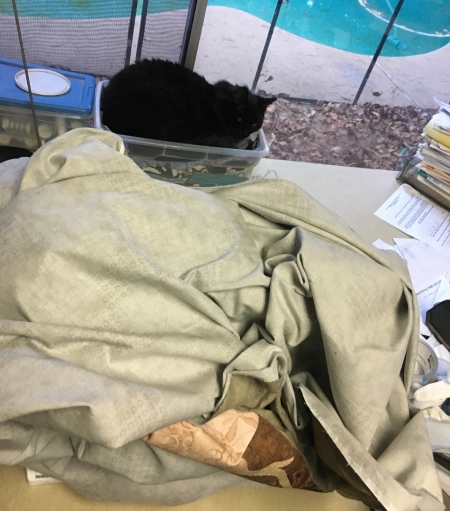 Later, in front of the last episode of Ozark (not the baby! not the baby!), I did three nights on the left of this…staying caught up is getting harder I guess. Some star stitches and fly stitches and a herringbone. I think the corner is almost done.

Then we were still watching, so I got all the dots on this one; now it’s ready for embroidery… 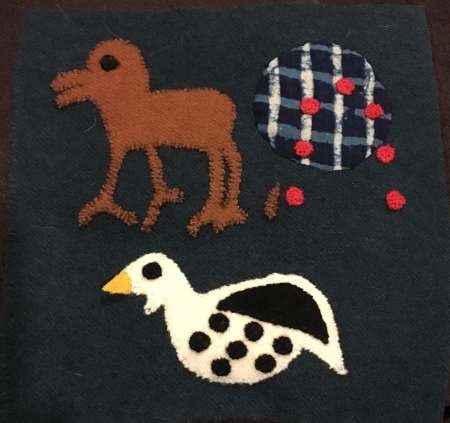 And this one too…so that’s April, ready to go in the bag for the fun part.

I started working on June, but then TV time was over and there were dueling cats and eventually bedtime. Plus I got sidetracked by the fact that June blocks are supposed to be sewn to other blocks before I sew stuff down, but I’ve already started sewing stuff down, so I’m fucked. That’s it. Throw it out.

Up too early this morning for the airport (not me, not the cats).

I keep the trash pieces around for a while…needed to cut a pencil tip, because I’d lost it and never found it and didn’t realize until I was doing the stitch down. These are useful because of weird shit like that. 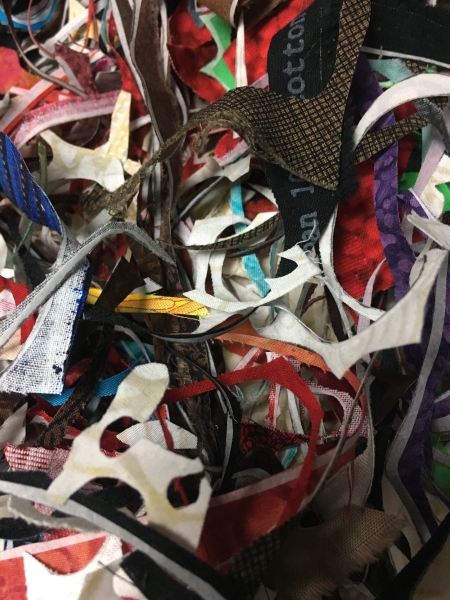 Straight up, I’m tired, I’ve got a ton of schoolwork to do, and I really need a neck/shoulders massage so my chiropractor can crack the mousing side of my back. Just so you know. This week is going to be a bit of a challenge…but I’m trying to plan out enough that it’s not worse than it could be. I might need a nap. Like now. Not now. Now to stores. Bad Kathy. No nap for you.