Grades are due in a week…it’s part of why I put my head down and put in 10 or so hours this weekend. I got some significant stuff out of the way, but there’s more in the classroom. That plan to spend an hour on the deck drawing? Well it turned into a half hour of talking and a glass of wine, but that was fine. I forget to take that time for myself…there’s always something dragging me back into what I have to do…so it was nice to have someone else remind me. Yo! Go sit outside and relax!

I’m not great at that.

So I didn’t get as much art done as I wanted to, but it’s coming…this is a busy week with lots of meetings, so who knows what’s going to happen. I’d like to be done with the cutting sooner rather than later, but I can’t guess how much longer it’s going to take. I’m over 6 hours in now and it doesn’t seem like I’m half done…although I did a bunch of tiny pieces yesterday and I feel like the rest is mostly larger pieces, so maybe I am halfway? Hard to say.

You can see them all there…the little triangles will wait to be cut out until I’m ready to iron them down. They get lost too easily.

So here’s where I’m at…trash box at the top…to-be-cut-out on the left, and stuff I’ve cut out on the right. It seems like there’s still more in the to-be-cut box than the cut box…so I guess I still have a lot to go. 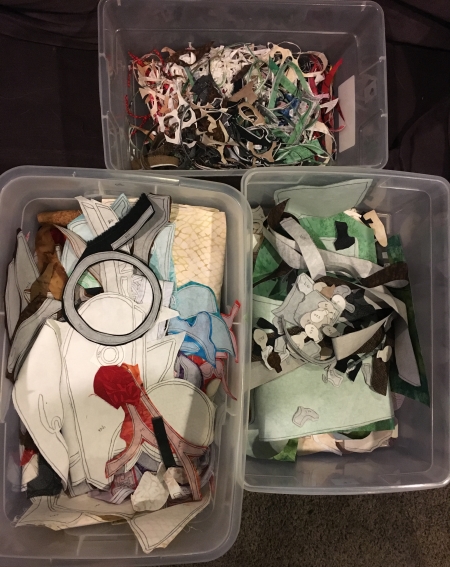 Usually cutting out takes less time than ironing, so this being halfway would make sense…and big pieces are generally easier to cut out than the fussy little ones.

We’ll see. I’ll be lucky to get 2 hours in tonight…Tuesday might be a little better. Wednesday for finishing? Eh. Maybe Thursday. But ironing together by the weekend? Maybe even Friday night? That would be nice…this thing is taking longer than I thought it would.

Things are getting slightly better. Less growling. Not getting along yet per se, but hey, we’ll take what we can get.

Still working on this…filling in the left bottom. I did a pink and a maroon, lots of French knots and some chain stitch.

Soon I’ll have to decide what to do with the rest of the left side.

Spending the whole weekend working makes my brain fuzzy…seriously. It does. Aaugh. This job. It really does try to take over everything. I guess the art is kinda the same way, but I prefer that. Almost every waking moment thinking about art? Not a problem. Maybe it’s because school is such an impossible problem and art is a solution to me.