Last night I had a great idea for how to write this post. And then I forgot it. This is why I should just start writing it whenever those thoughts pop into my mind. I even have the app on my phone…I’ve written entire posts on my phone…so there’s no excuse. Well, I think the excuse was that I was driving. But whatever that thought, ever so important at the time, it’s gone now. Or not really…because I’ll be driving along and it will pop back in…you know it will.

But for now, the mind is blank. At least on that topic. It’s roiling through a series of other topics instead.

I belong to a quilt guild…just one. I’ve belonged to it since I was about 25 or so, maybe earlier. I was the youngest person there for a really long time…then one woman came who was a year or so younger and another woman brought her daughter. I am no longer the youngest woman there. Which is fine.

I only go about once a year at most…because they don’t have a lot of speakers I want to hear. They used to…or I used to go listen to a lot more? No, I think it really was more art-quilt centered for a few years in the way back, so I saw Laura Wasilowski, Hollis Chatelain, Joan Colvin (that link is a video of Joan, who died in 2007), and Ellen Anne Eddy, along with others. I took classes from most of them, when I could fit them in, so they probably had some effect on me long term, some more than others. I still dye fabric the Ellen way. It may be that I reached saturation…I saw enough techniques that I didn’t need to see more? I went to Patt Blair a few years back because I liked her use of color, and last night, I went to see Sue Carlson for her use of fabric and color. I’m pretty sure I have her first book in here somewhere, so this is not a new fascination with what she does.

It was great to listen to her explain her process over the years…fascinating really. I completely understand the obsession with fabric as the palette. I have some pictures, but honestly, they don’t do justice to the work…although when I got there, a slide show was playing that had me in it (that was weird)…apparently Visions was going to talk about their current exhibits. That’s Carlson’s Dixie Dingo Dreaming… 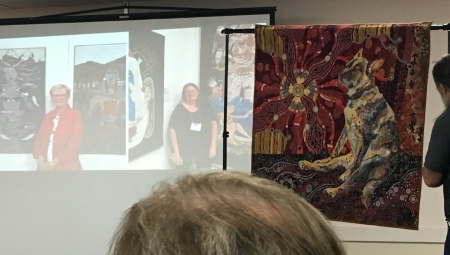 And one of her fish…

But really it’s about seeing how she uses ALL the fabrics to build her pieces.

Aboriginal dot dingo…amazing use of fabric.

Anyway, I enjoyed it. You should go check out the website and read her blog. Her pictures are way better than mine…

I came home to the two boy animals behaving… 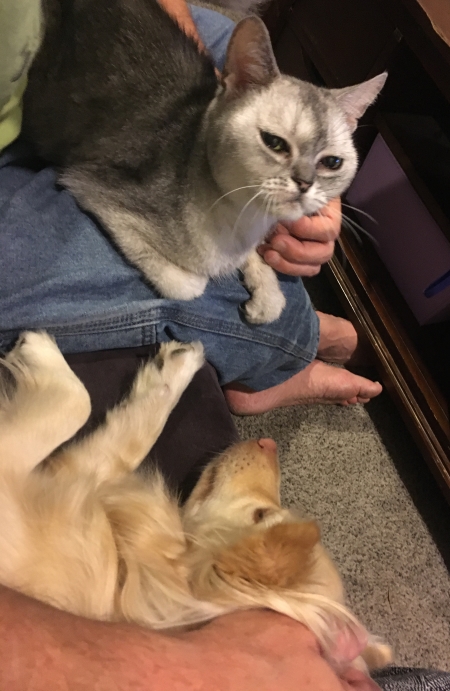 At one point, I had all 5 animals in one room and no one was hissing, growling, yowling, or barking. It was stupendous. A work in progress.

I did cut things out last night…for almost two hours! Can you tell? I can…barely. The top one is stuff that’s cut out…the bottom left is still to be cut, and there’s the trash pile for just in case.

Oh yeah…and Satchemo…wanting to be in the middle of things.

Sometimes mornings with all of them are a bit much. Calli wouldn’t eat this morning, someone threw up in the hallway, and Satchemo and Midnight were both in my office sounding off at each other. Whoo!

I did work on the elephant at the meeting until they turned the lights out…a little progress.

I’ve got nothing else going on tonight, so hopefully there will be another 2 or 3 hours of cutting…maybe I’ll be able to see the difference in the piles by then!