I had some serious artbrain meltdown last night. I’m still not sure I’m past it. This drawing is just so difficult. I often work in symbols or metaphors. I don’t always draw an actual event, but sometimes the effects of the event, or I hide the issues in tattoos or the objects someone holds or wears. It’s easy enough to tell a story with words, but I also tell them with pictures. This story is so easy to tell with words…it’s one most of us teachers know at the moment, but it’s harder to show. But I’m trying. I don’t know if I’m happy with it though. I almost pulled the whole thing apart last night and started over. That’s rare. But it wasn’t working.

I did this first…played ball until they were both tired…

And all that was after working on school stuff for about 2 hours, finding all the student photos and trying to print them and going to buy a new color ink cartridge and I still need to print the damn things.

Finally, after all that, I stood up (feet recovered…I think I need new shoes. My arches are killing me by the end of the day) and headed to the drawing. This is near the end…the wine didn’t come out until after 11:30 PM. I did a bunch of stuff in pencil before going to ink, which was good, because I changed my mind about three thousand times. 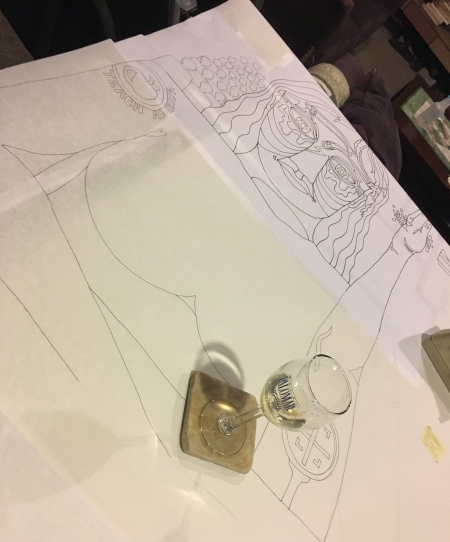 Pencil first, vague lines showing where shit should go. I don’t use pencil most of the time. But this thing isn’t fully coalesced in my head, so I have to see it somewhere first. This is probably how most people draw. 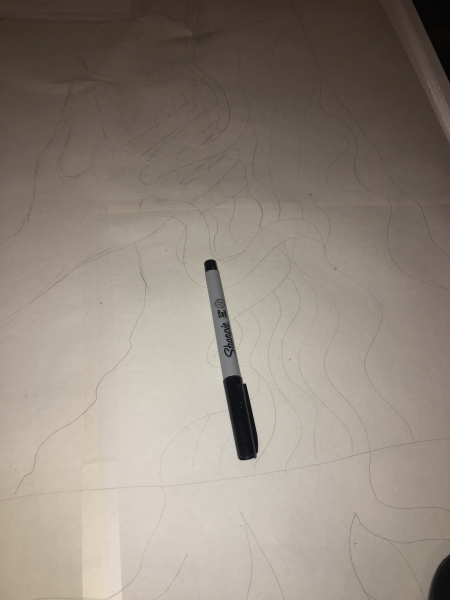 Then ink. I’m trying to keep it simple. It’s big. It can’t be super complicated. I won’t get it done in time.

I didn’t want to fight violence with violence. I write that as my daughter is considering going to the protests in Boston. One part of me wants to tell her not to go, but I’m fully aware that we need to stand up and not be afraid in the face of this crazy shit that’s happening. If I were the mother of a child of color, I would be terrified all the time of sending my child out in the world. As a mother of a white kid, I still get scared…they’re adults, but I worry about them. But they have privilege; this means they and I have to be willing to stand up against all the racist, sexist, and what’s the word for being anti-religions that aren’t your own? All that. So I tell her to be safe, stay with a big group, stay away from cars. Stop drop and roll. Whatever. Because it’s not a safe world we live in and we want it to be better for everyone. Even the dumbasses who think fascism and terrorism are acceptable. Maybe if enough faces are staring back at them that mirror their own, without the anger against others, maybe then some part of their brains will start to turn against what’s in there right now, stop blaming others for their lives not being golden and amazing. I know that’s unlikely. There’s no magic answer.

So octopus tentacles. Nature fights back. Symbols. I won’t shoot. I won’t pick up a gun. I won’t lynch someone or kick them out of the country or tie them up or drag them behind a car or mow them down with one. I won’t fight a war. I won’t launch a nuclear missile. I won’t hit or kick or punch. I say that, but if someone were coming after my students…I would. I’d throw things at them. I’d trip them up. I’d bodyslam them. So there’s that.

Anyway. More of the drawing today, I hope. I really am hoping that when it’s all done, it’s what I want. It will work. If not, maybe I will start again. It’s rare that I do that at this stage, the full-size drawing stage…but I do redraw at the smaller stage pretty often. We’ll see.