So apparently I was done with school last night, because I came home and made art for three hours instead of working. It’s unfortunate that I have to go back for two more days, but whatever. Certainly the headache that started yesterday morning is notice that I need some time off. Or it’s the weather. Or that crick in my neck. My chiropractor says I should get regular massages. Um. OK. But those cost money. It sounds lovely and all, but…I can pay for college or pay for massages. Suspect my kids would prefer the former. Speaking of kids, both bedrooms are clean and vacuumed and one kid comes home late tonight and the other, the girl, tomorrow. Her roomies will miss her greatly of course, because they will only be able to read her mom’s blog and not have the fun of harassing her. I’m being stalked by her roomies…it’s OK, I stalk them on Facebook and Instagram…and as soon as they send me photos, I’d be glad to make a giant-ass nude quilt of them, a la Botticelli? The Three Graces?

Or if they’ve been eating too much junk food, it might be a la Rubens? A sign of wealth, all that chub…

Or my favorite for simplicity (aka fewer drapey lacy fabric bits), Raphael’s Three Graces. The girlchild gets the butt view…y’all can fight over left or right.

Actually. That would be a cool idea. I did Crone/Mother/Maiden already. The apple thing is stupid though…are those even apples? They should be brains or heads or eyeballs. Seriously ladies, I think I’m doing this drawing. Good thing I have your photos off the web.

OK, enough crazy. I finished the fucking wine glass…it only took 11 fabrics. Here I was trying to decide about the color of wine. Red is often easier to do in fabric, but the glass is right next to the heart and I didn’t want to compete with that. 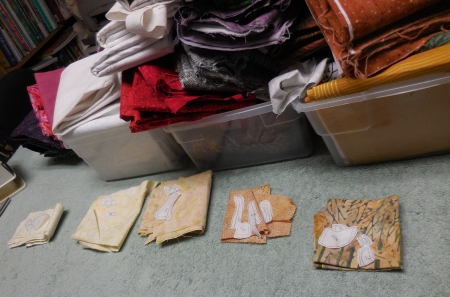 Now I don’t remember what color the wine bottle was. Oh well. The quilt doesn’t have to pass a logic test. Certainly I’ve put screwier mess-ups in my quilts before.

I used a whopping 102 fabrics…for a quilt this size, that’s a lot. Don’t know what to say about it, except that’s what happened. Some of it is because I took so long to work on it, I think… 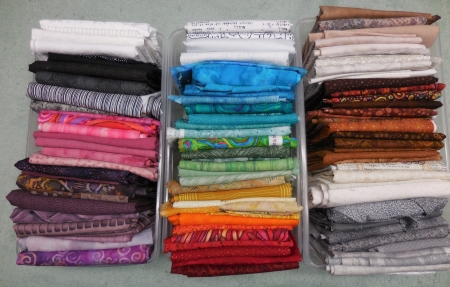 The more stretched out the time in between picking stuff, the more I forget about what’s actually in there. When I was sorting the fabrics out by color for that photo, there were a couple that I didn’t remember using. I also had some fussy moments with the blues in the end because stuff I thought matched before didn’t seem to match now. OK then. Eleven hours and 24 minutes of ironing for only 770-some pieces. I started Dec 6 and finished on the 16. Not super fast. Eight days of actual working on it…most less than 2 hours at a time.

Bathtub 2 only took 4 hours to trim the fabrics. I’m already 4 hours into this one. I started on the 10th, but haven’t been doing it regularly.

Here was the pile I started with…

By the end of the evening, I was working slowly through it. There’s a few more hours of cutting there, to say the least. 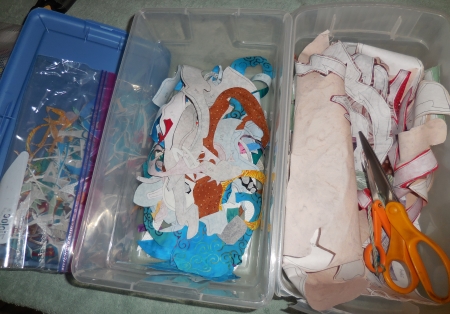 Wish I could take it to school and just get it done, but I need to be grading stuff still. I have 8 assignments to grade, including the one due today and the three due tomorrow. Some are easier and less time-consuming than others. I’ll probably have to come by school on Sunday to clean my room up for the custodian and work crews, but also to pick up all of Unit 3. Ugh.

Looking forward to doing some drawing and ironing a quilt together, and even making a baby quilt, and a few things for Christmas, plus seeing my kids and not having to see the other kids (the ones I teach) for a while. Not looking forward to grading stuff and cleaning, which needs doing…my dad finally got the shelves up that have taken so much time and energy on all of our parts, thanking him for that, but now I have to get my act together and put stuff on them, which means going through stuff that’s been packed up for a year and a half. Obviously desperately important stuff. Not putting the CDs back up there.

I really do want to draw that three graces thing now. You can totally see me making that quilt, can’t you. Huh. Wonder what it will bump in line…because yeah, there’s a line.

One thought on “There’s a Line”