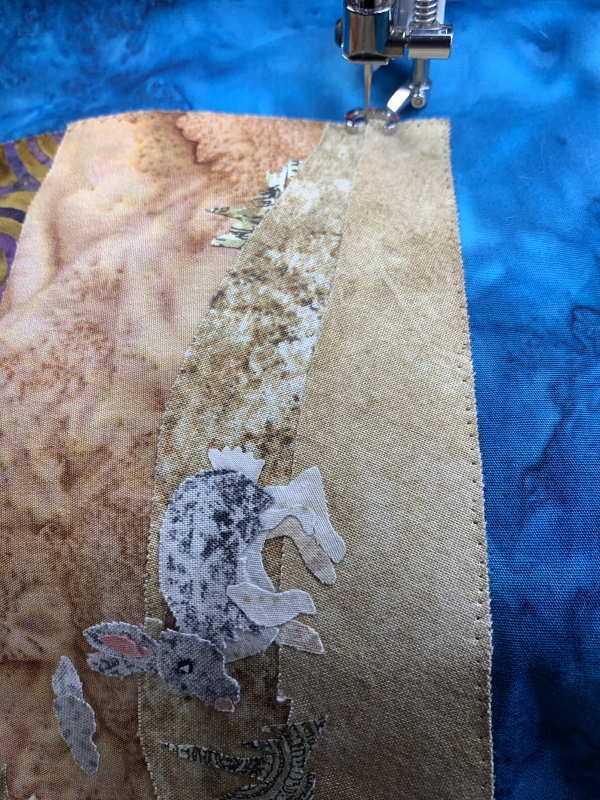 I got an email last night from a student wanting to know why I hadn’t graded all his work yet. Sigh. I am behind. I am always behind. There are very few times when I am caught up. Right now I’m behind because I’m trying to set up a field trip and do school and do art and get ready to leave on two separate trips, and there aren’t enough hours in the day. Wait until he hears I’m not grading anything over break. OK, I’ll probably grade SOMETHING, but not a lot. I won’t be home enough to grade a lot. Which sucks and yet is necessary to reset my brain. I will explain to the kid that if he wants his grade to go up, though, he should redo the assignments he rushed through, since he’s already done with the project that we are finishing up today. He has plenty of time to fix them.

Trying to find time (and more importantly, the energy) to grade stuff is difficult right now. I can do a few easy things in class, but not as much as I used to be able to do. It doesn’t help when I’m trying to do chaperone groups for the science center at the same time, plus field all the calls from the office, plus get them to actually get on task and stop turning around and distracting their friends. We have three days left, with most of Friday on a field trip. I’m exhausted and done; so are they. I was trying to grade the two art assignments during prep yesterday; made it through one, then got interrupted. So that will be today, plus whatever else I can get through.

After school, I have a union meeting on Zoom; I’m going to get my car looked at again (their request) at the same time. There was an oil filter issue that I really don’t want to have while I’m camping next week. Then home to record the lightning talk I rewrote again last night. Finally got the slides to work, copied them into a new presentation, added timing, practiced a few times, edited the script, then realized it was bedtime. Fuck. Hopefully I will get to do some sewing tonight. I didn’t last night. My goal for the week of having this thing pinbasted before I go to Boston? That’s not happening. I did start the stitchdown on Monday night…barely.

I got all the way around the edge, plus the little piece with the rabbit. I’m trying out the other MonoPoly color, smoke. I like it for most things. Not sure about lighter things. Not patient enough to switch between the two though. I’d like an hour or so tonight with it. We’ll see if I get that. I didn’t get much done Monday because I had to iron the whole thing down with steam, so that was 40 minutes or so.

Anyway. I’m dealing one day at a time right now. Trying to find the cat her special food. Ugh. Had to go to the dentist, which is no longer open late. Ugh. I’m juggling too many things.

I’m going to be SO productive today. I am going to cross things off the list like a boss! Or not.

I did go to the gym yesterday and finished my book. Exercise is key. I don’t see any exercise in the next 5 days, unfortunately.

After dinner, last night, I worked on these guys…

This is my braindead work. I had about an hour to eat and hang with the man while watching part of a movie. We don’t watch ALL of a movie at once any more. It’s my fault. I always have too much to do. But I pulled these out because I panicked that I would have no stitching for these two trips, OMG, nothing to work on! I like to have all the applique done and just do embroidery in the car or on a plane. These are the July blocks of Sue Spargo’s Homegrown block-of-the-month quilt. I’ve been working on them for a week now, convinced I would need them. Then last night, I went through the stash to see what needed embroidering. My loves, I am still embroidering the March blocks. Seriously. I have April, May, and June ready for stitching. There is no way I’m finishing all of those. Last year, I finished January and started February during Spring Break (yes, it’s been a while). I’ll be fine. I was trying to finish the Chirp borders over the last year…it’s a much less portable piece right now, so that’s why I haven’t been working on these. But I will be.

Patty Kennedy-Zafred’s piece in the front. Deb Berkebile’s piece on the far left. Sherry Kleinman’s piece to the left of the window next to mine. Not sure about the other one. This show was supposed to take place in Spring 2020. I’m impressed by their persistence to eventually show this exhibit. It’s much appreciated.

OK. School. Grading. Because I don’t want to think about it for two weeks. Try not to lose my mind in class. Do all the things. Make the kids do all the things. I teach 4 things today. Exhausting. Anti-tobacco curriculum (last day, yay! Thank you state politicians for putting that on us!), end of the reptile rescue project, start of photosynthesis escape room, plus monster zendoodle ink and erase. Plus harass the kids who haven’t finished anything. Fun stuff.

Meditative stitching at the end of the day…looking forward to it. 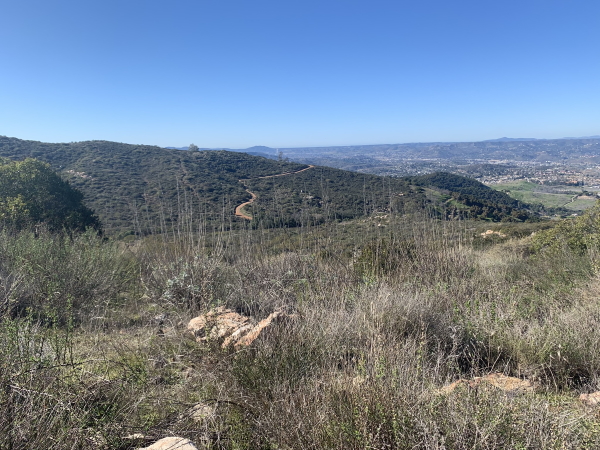 I’m late writing today. I had a thing this morning, and then the boychild and I took the dogs on the last long hike of Winter Break…although next weekend is a 3-day weekend, so we’ll probably do another one. Hopefully by then, the daylight will last long enough that we can hike after school some afternoons, but we’ll see…it needs to be light late enough that we can avoid coyotes…as much as you CAN avoid coyotes while in wild spaces.

This is Crestridge, and it was cool enough to do this midday. We’ll come back on that trail way over there. We usually go UP that and come back this way or another, but this time we did it backwards.

A portrait of two dogs who refuse to look at ME, and look at the boychild instead.

Anyway. That was today. Last night, I hung out with one of my stitching groups…Julie is crocheting next year’s Christmas ornaments, which is very organized of her…

Many of her annual ornaments hang on my tree. When I remember to decorate it, which is often on Christmas Eve.

And Kathy is working on another Sue Spargo, Homegrown…which I own and will enjoy stitching if I ever finish the 2015 block-of-the-month, Folk Tails.

I finished the three September blocks with that flamingo, and she is working on Block 8 of a million. Or so. Yes. 2015. You read that right. I haven’t gotten much done on it this year…too many other embroidery projects on my plate.

Honestly, the process is more fun than the finish on these.

There was lots of kitten playtime last night…here they’re watching Simba, who’s watching things far away that he needs to bark at. The kittens don’t know why.

Honestly, none of us know why he barks so much or what he’s barking at. After the dogs left, we had all three cats playing with one purple ribbon…

Fun for everyone…especially if Nova grabs one end and tries to run with it.

I did finally cut a piece of paper to start drawing the next quilt. I guess I gave up on a drawing a day, because now I’m drawing the quilt instead. Nova came up to see and decided the remote was a dangerous beast that needed attacking.

She seriously pounced on it. Kitten is still the biggest…but there was some racing around the house by all three…

Back to drawing…I started with the drawing from a few nights ago. I’m not sure where else it will lead, but it’s a start.

It’s nice to have somewhere for Art Brain to land.

Tomorrow, I’m driving a million miles to take a class, and then driving back again. All good. Oh yeah, I got into another show…Artist as Quiltmaker XIX. Heart-Shaped Box will be at FAVA in Oberlin, Ohio, from May 16-July 26. Cool news…

Yeah. I blew off writing yesterday. Head in a place. May write later. Well, technically writing now, but just about upcoming shows.

Primal Scream will be in a local show, The Power of Feminine Energy, at the Centro Cultural de la Raza (in Balboa Park, one of the round buildings on Park), San Diego, CA, March 19-April 3, 2016. 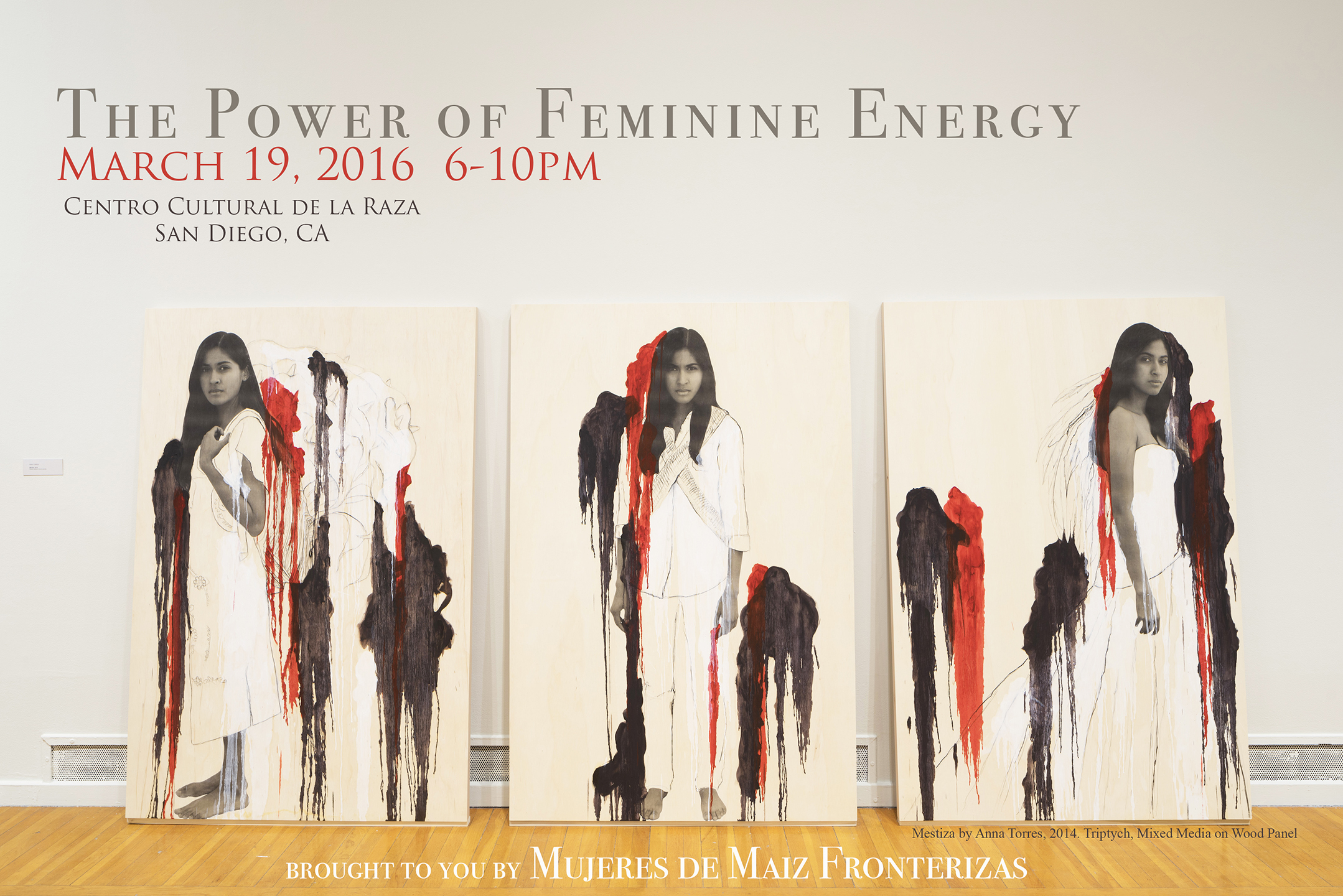 Then if you happen to be in Pennsylvania (there are some good fiber reasons to be there), I have a piece in Art Quilt Elements, Work in Progress. 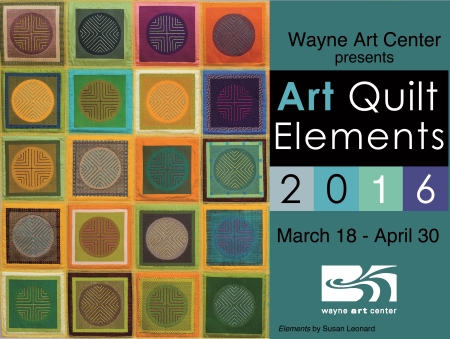 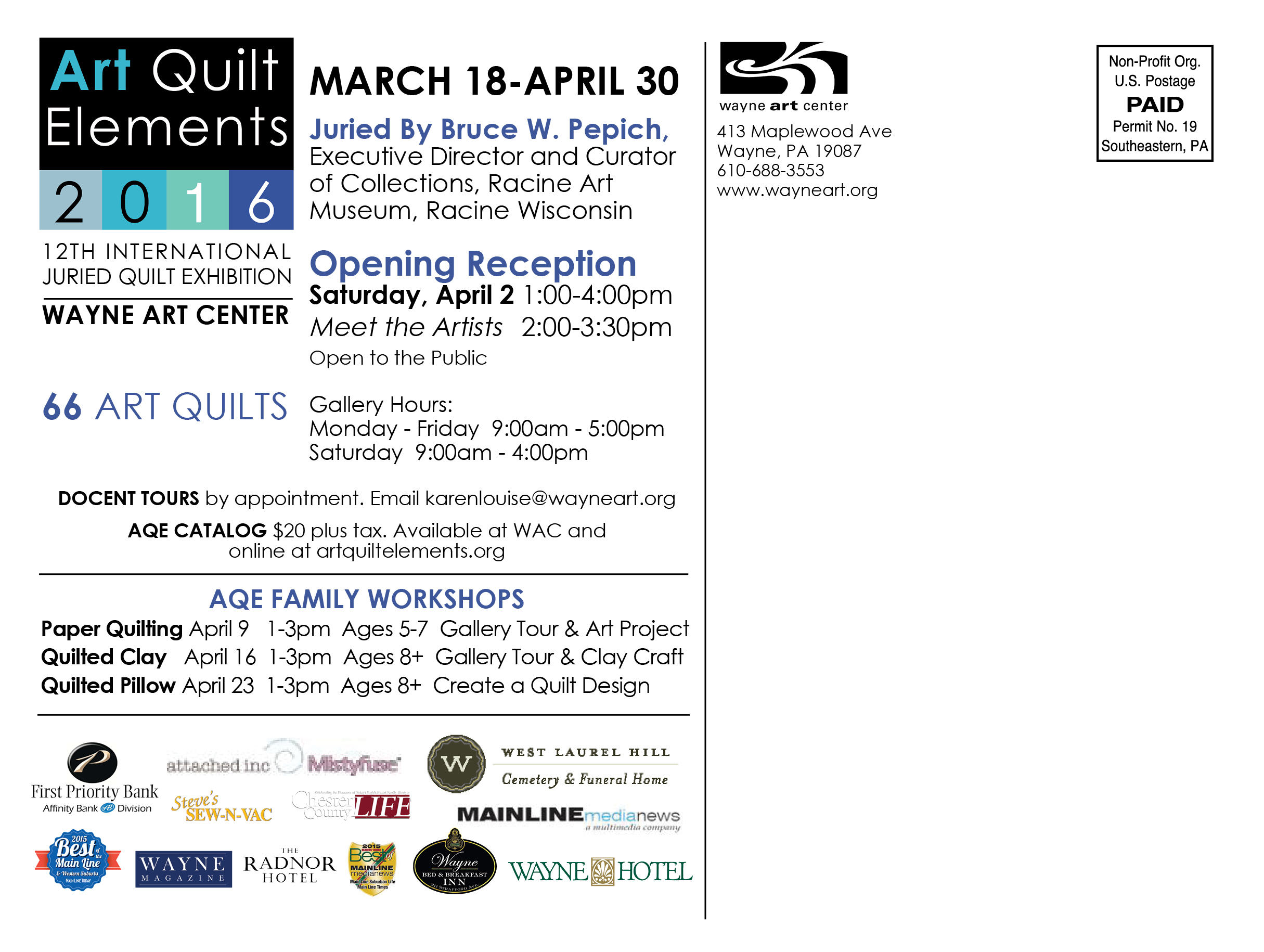 In Deep will be at Artist as Quiltmaker XVII, FAVA’s 17th Biennial Exhibition of Contemporary Quilts, Firelands Association for the Visual Arts in Oberlin, Ohio, from May 15-July 31. 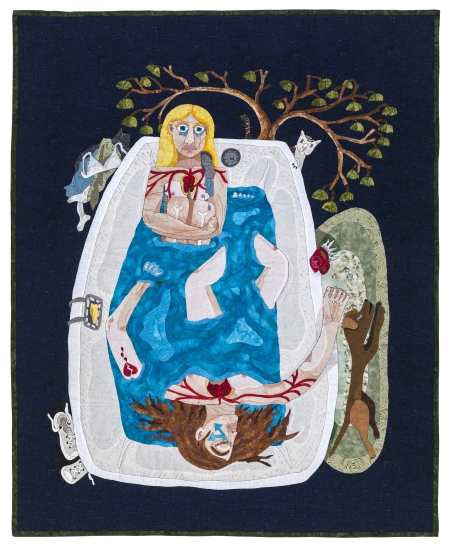 Then I just found out Friday that Mammogram will be at the Oceanside Museum of Art in our next California Fibers’ exhibit, Eclectic Threads. 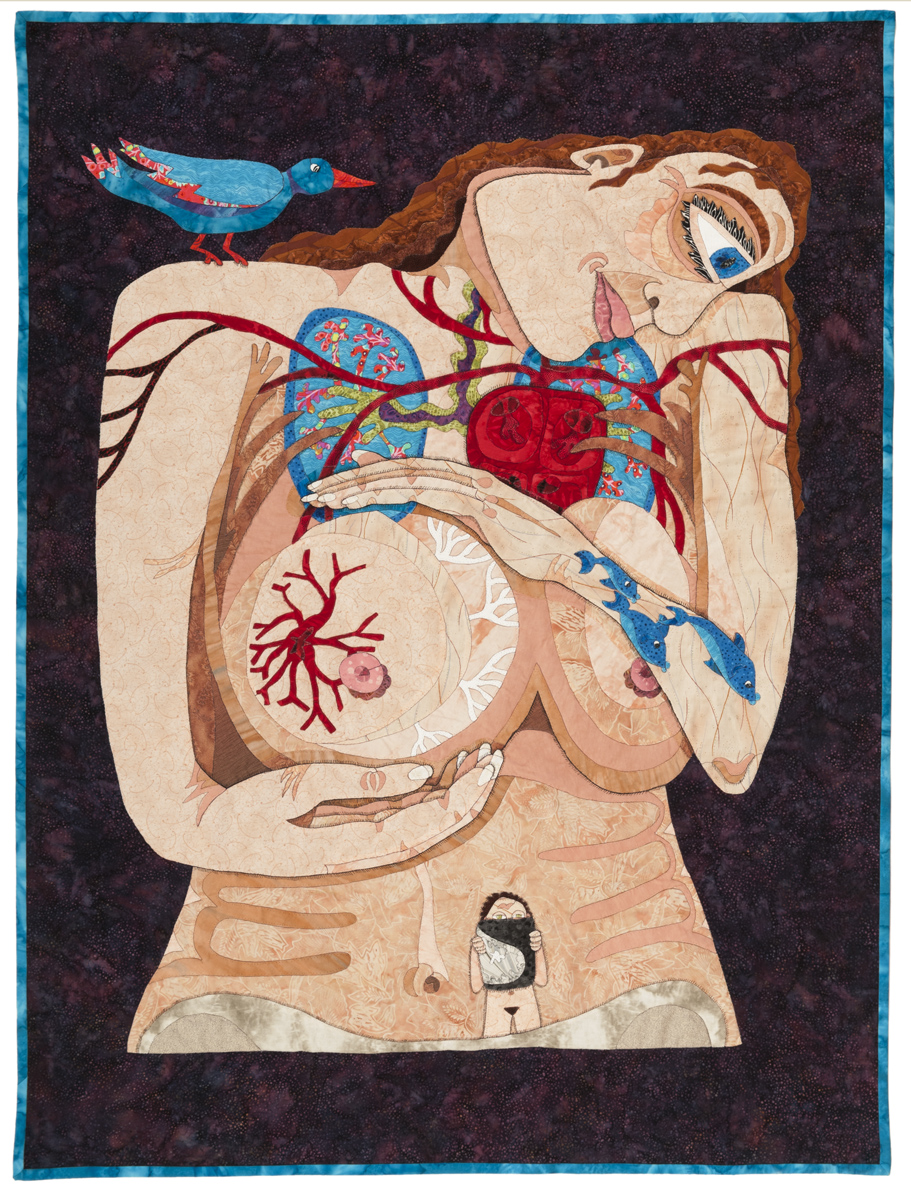 The opening is June 25 from 5-8 PM. There will be at least one other exhibit there at the time, Love Letters in Metal: Jewelry by Svetozar and Ruth Radakovich. Lots of work out there. I keep reminding myself of that when my brain goes for a swim in depresso-soup.