I’m pretty sure these pictures are all gonna be backwards, but I can’t deal with that right now. I’ll see what I can do. Going from phone to computer and back is problematic. I’m posting from Boston. It’s 11 PM and one college kid is in bed while the other 4 are presumably at the same party, or maybe another one is on her way to a party? I don’t know. I opted out. My introvert self needed some quiet time and some mental space to catch up with some grading and then this and maybe some drawing, if I feel up to it. Or maybe I’ll just READ. I finished a whole book yesterday. It was exciting.

So first of all, this is Quilt+Resist at Woman Made Gallery in Chicago, Illinois, which opened last night. You can see my anti-gun quilt Rooted in America in the far back.

So yesterday, I flew across the country to visit the girlchild in her senior year at college in Boston. I haven’t been here since she moved in Freshman weekend, so it seemed time. Plus it was my Christmas gift from last year. I read a lot on the plane, but also watched a video or two and stitched for a while. It was a trouble-free flight, which was nice. She picked me up from the airport and I’m sleeping in her bed, which is comfortable, although she is still messy. I can’t really judge. I am too…messy, that is. This is the view from the bed…with the quilt my mom made her (and a few more, because shee-it, it’s cold here, and that radiator doesn’t come on).

Then this morning, I had persuaded her that it was OK to go to a job networking conference on conservation employment, which was at Harvard. I sat in Tatte, a cafe that is anathema to diabetics (holy crap, I forgot to post the food picture…damn…), but makes a decent cup of tea…or in my case, 4 cups of tea. Yeah. Well. I needed it, because 3-hour time difference not in my favor. I graded National Park assignments for a good three hours. Ugh. But it’s progress. And it was an interesting place in which to do it.

Then I wandered all over Harvard looking for a bathroom, because 4 cups of tea and line at Tatte was horrific if you don’t have a penis (I don’t), and Harvard doesn’t seem to want the masses to pee. I don’t blame them, but eventually found the science center and a bathroom. Partay! Seriously. These things are important. Harvard, as always, is beautiful and old school America, plus it’s Fall and it stopped raining (did I mention last night’s rain? More than Southern California has had since last Winter, basically, in one night)…so it was really cold and beautiful, once the sun came out.

Then I tracked down girlchild’s friend in the Student Center (I just happened to be there eating my second bagel of the MONTH in the last two days, because Boston easy food is bagels and cream cheese…everything else was sugar)…and we went to the Museum of Fine Art, oh so fine, yes. I absolutely sucked at signs and figuring out who made what art, but this was cool…

And the one on the left is styrofoam cups.

Plus is that a Bernoulli? I know it’s a Van Gogh on the right…

Here’s the contemporary part, although the video kept moving across these giant batting knots and it was making me ill. This piece is by Cecilia Vicuña; I know that. These knots hang from the ceiling. They are not small. 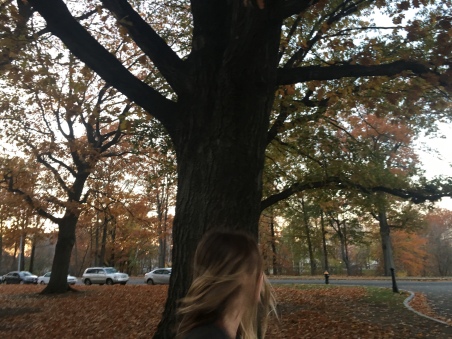 We were at a fundraiser after that, and then hanging out. I graded for a while. Two full assignments down so far. I know we have stuff planned for tomorrow, so I’m not planning on getting much done…although I need to send the parent email. Maybe I’ll do that tonight. I did get some pieces cut out for the new quilt last night…while we were watching (deep breaths) a Christmas movie. In November. And not even after Thanksgiving. OK. I can hang. There was wine. I’m going to attempt to stay up for another 30 minutes, maybe reading my book, maybe drawing, and then to sleep. Sleep is a good thing. My brain is confused by the times I eat and sleep right now, but I can handle that. It’s nice to be with her. Totally worth the chaos I will return to at school. I say that now! No, really. Worth it.

One thought on “Worth It…”

My Sharpie died, but I always have some sort of (really sucky) pen… #drawing
My parents surprised me today after some supreme mom negotiations…I have a new machine! I’ve never had a new one…may she sew like the wind!