I’ve been up for a while, fed all the animals except the human ones, balanced some money stuff out, paid the Visa (oh crap) and then the girlchild’s fall semester (oh holy crap), and read some stuff, but haven’t really got the goop outta my eyes or the even the full cup of tea down my gullet. This is NOT the Summer of Sleep. Totally not. Perhaps I should go to bed earlier, but I really do find the late-night hours are the most useful to me, especially if it’s warm. It’s not too bad (yet) today, so that’s nice. Maybe I can use that to my advantage. One more day without jury duty. That’s good. I swear, this regular uncertainty just fucks with me.

I wasn’t very efficient yesterday until later…I was tired and had a brunch thing I had to do, so then you eat the the brunch foods and they make you tired and it’s Sunday so you’re already tired even if you didn’t work all week. Yeah. That. I did bid on a copyediting job last week or maybe the week before? I didn’t hear anything, so I’m betting I didn’t get it. I bid on one this morning, but she’s already said money might be an issue…I think people don’t have any idea how many hours copyediting 80,000 words takes. We don’t just read it once…but at least three times, looking for a variety of stuff. And her sample wasn’t great. So I’m assuming I won’t get that one either. Oh well. Not sure I’d have time to do it anyway. It would really suck to get a job and then get stuck with jury duty…double hours. Ugh.

Anyway, each day I don’t have to sit in a courtroom is a good one.

Kitten is a freak…very needy at the moment.

We had dinner with the parentals…so Calli wanted the ball thrown 700 times. Grandpa obliged…until we decided she was tired. She won’t ever stop unless we make her. 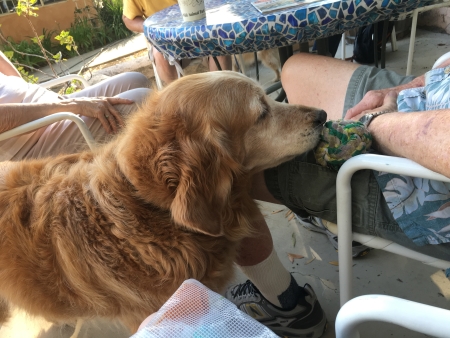 I worked on the sun…all I got done was chain stitch around the whole thing and a little bit of backstitch. Then I have to go find the hippo instructions from March or something. 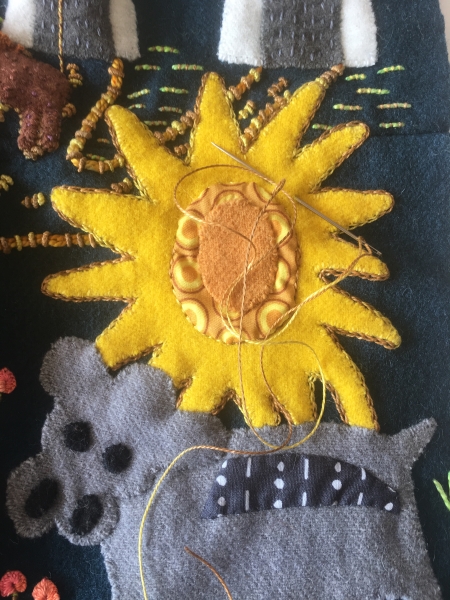 I tried to get all three dogs in one picture…semi-successful. They don’t follow instructions well. 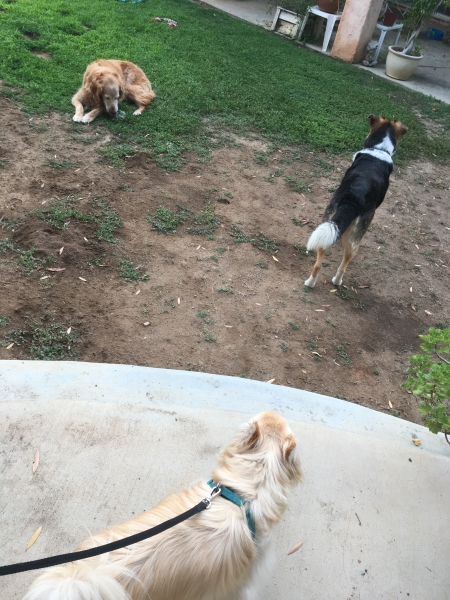 Calli is a good girl. Simba is on a leash because he gets up the slope in the bushes and no one can get him down. We let him loose at one point, but he was tired and behaved. Katie was a pain because of food. 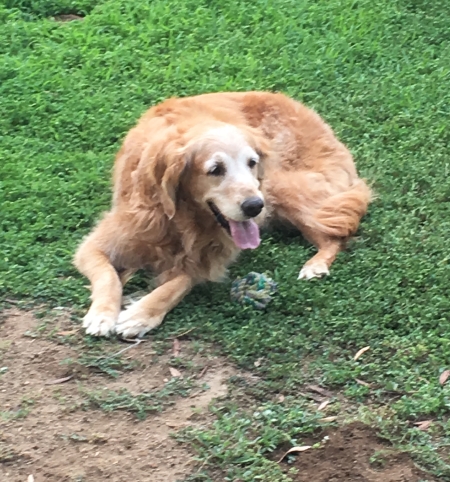 Then we came home and I sewed the binding on the other quilt. This is Satchemo supervising the pinning. He really wanted to sit on it, but I wouldn’t let him. 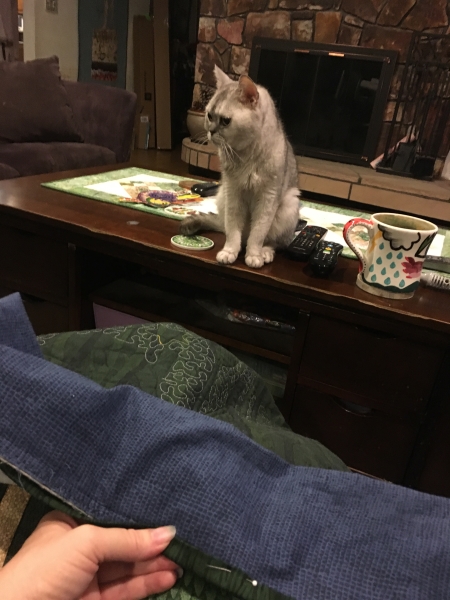 Pile of quilt. I won’t be working on this really soon. Or maybe while I’m watching the telly. Who knows. It’s a nice break from standing. 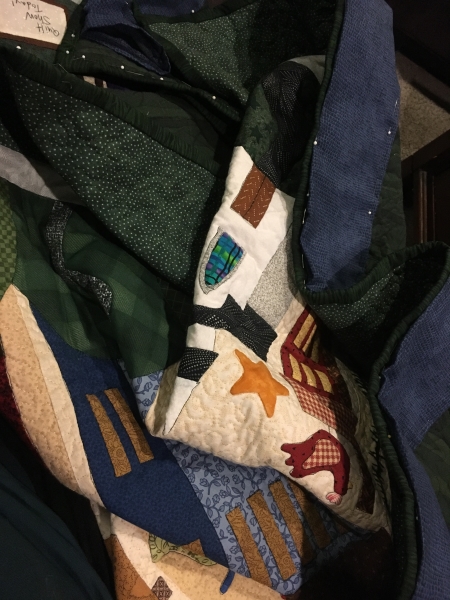 It’s hard to get up off the couch when the headless wonder is all draped over you. I feel bad getting up and leaving him there. He obviously wants the loves. He was licking my leg (ick). 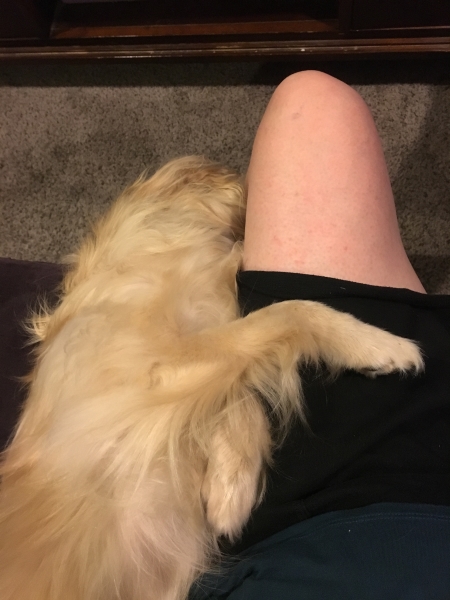 But eventually he left, and my brain strangely went to graffiti walls. You can blame whatever I was watching on TV. It had a graffiti wall that said BOOM. And that was it. I was down a rabbit hole. Suddenly it made sense to have a graffiti wall in here. 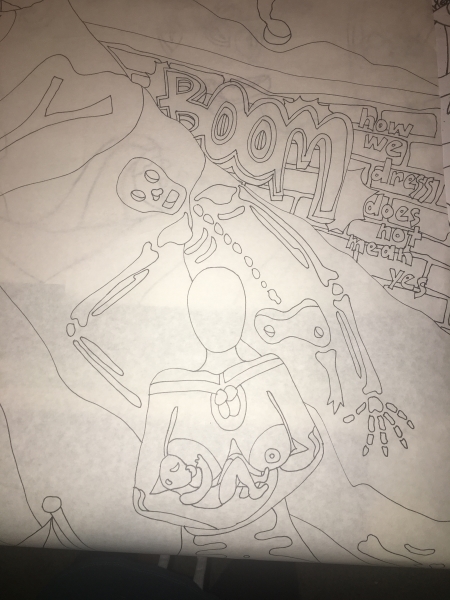 Continued it on the other side, added a viewpoint, finished the hill behind. 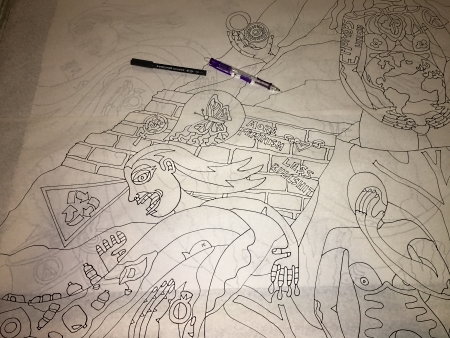 There isn’t much left…just the sky to the left. Then numbering it (I’m a little scared of that). 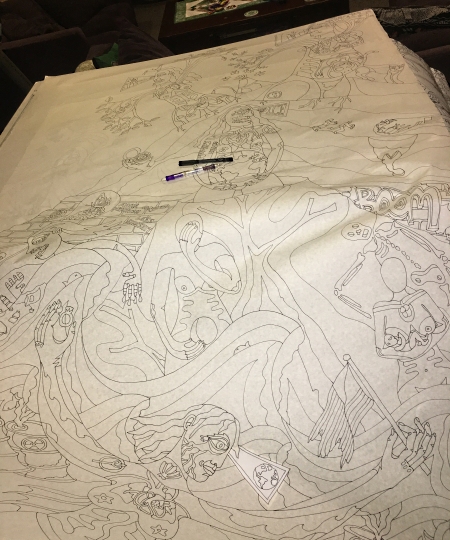 It’s time to get this one rolling. The deadline on the other one is a ways out, so I can slowly hand-stitch the binding and wait a bit on photography. I do need to finish those two little ones too, but since I finished the binding on the other one, I can use the machine for that today. So finish the two little ones, finish the drawing, number, start tracing onto Wonder Under. Hope for no jury duty.