‘Tis morning and I am ill. Hello summer cold, winging to me from the snotty nose or infected fingertips of some kid who probably got to take a sick day…or three, based on my current attendance rosters. Teachers should be able to request who’s out sick the last two weeks of school…it’s never the annoying ones. Their parents are like NO. YOU GO TO SCHOOL AND MAKE YOUR TEACHER MISERABLE AND SICK. My poor body has been trying to fight this one off since Saturday…that’s when I first started feeling off. Anyway. Welcome to the end of the year. Let’s make it more miserable than it already is.

Today is a long one…teaching STDs and then a union meeting…hopefully they’ll remember it’s the end of the year and make it short. I forced myself to grade 2 1/2 periods’ worth of websites last night…it was a good thing. I only have one period left, so I’ll get that done today. Then I’m down to a few assignments from this week and one from last week. I can see a light! At the end of the 183-day tunnel that is a school year…that’s minus the weekends, so don’t get excited about how many days you have to work compared to me. I worked until 10 PM last night with about a 2-hour break for dinner and errands. So that’s just a 12-hour-day or so. Oh wait, I did take 20 minutes for lunch. 11 hours and 40 minutes. At least 6 hours last Sunday. Sigh. Sometimes. This job.

I’m jealous of people who can just choose to take a sick day without balancing the ramifications of a substitute in there (or not GETTING a sub) who will cause chaos and destruction. And maybe burn the school down. Yeah. Nope. Not this week. Not next week. I’d have to be hospitalized to be that nuts. And I’m not THAT sick…it would just be nice to have the chance to have a sick day. And to be able to pee whenever you need to. And maybe have toilet paper in the bathrooms…that would be a plus.

Here’s our school rooster, Richard. He’s still here. Can’t be caught. Was hanging out by my car.

So you haven’t seen this for a while. I got all the circles sewed on and then floundered, because it wanted 96 stems now, all in Palestrina knots…which aren’t hard, but I had to find the right thread and the book with the pictures, and that apparently was too hard to handle. Until last night. So I got 11 done after dinner, while watching Handmaid’s Tale… 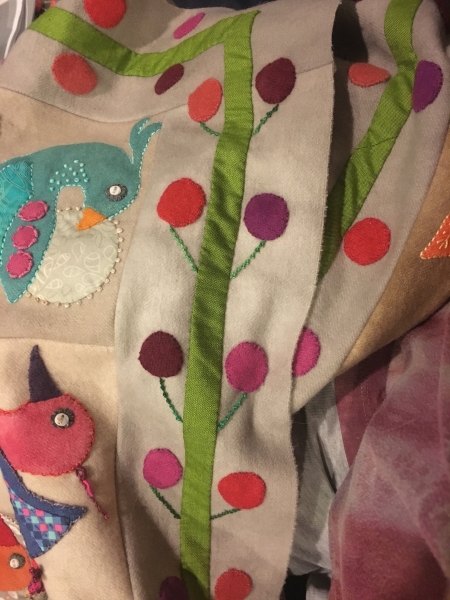 So I guess it’ll be another 8 nights before I’m done with them, at that rate. It’s faster than sewing the circles down anyway. And then each circle gets some sort of embellishment, based on its color (some of them are very close in color). And then it’s done and it can go into the quilting queue with two other hobby quilts I got done in the last IDK-how-many years. I should maybe do those. I COULD do those.

Katie is here. My parent’s dog. Just for a few days. She upsets the equilibrium.

She’s not a bad dog. She just makes a dog herd instead of a pair, and then the cats…she likes to harass them. Mostly just by staring at them and making them uncomfortable. I’ve had the consent talk with her, yes means yes, then the bullying talk, but nothing works…mostly because she’s a dog and has the brain of a 2-year-old…on a good day.

So I spent two hours last night going through the bins of the 200s through the 800s, finding all the flesh pieces. Here they are. All of them. Are any of them ironed down? Fuck no…because then it was after midnight and I’m supposed to go to sleep. 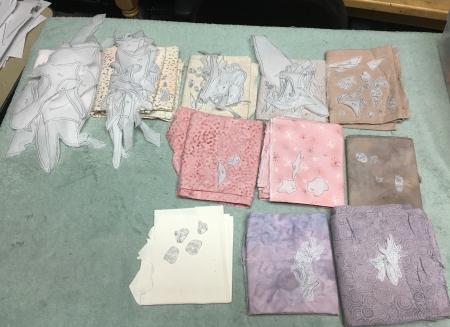 So I piled a bunch of plastic bins on them and I will just hope no cat causes a mess while I’m gone. These two tend to stay off the ironing board, so I think I’m OK.

Then this was the disaster that was left over. This is every piece that is NOT flesh. They’re all in piles by what they are (uterus, lungs, heart, bird, eyeball, whatever). 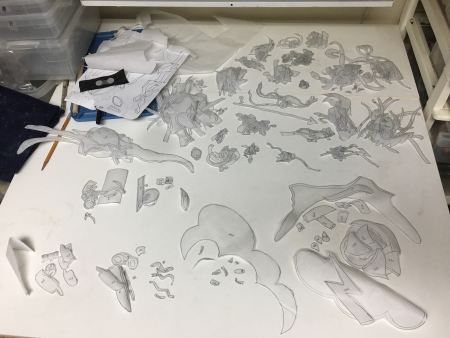 So once I get done ironing all the flesh down (hopefully tonight), then I’ll start on these. Usually I have some idea of how far along I am in that process, just based on the numbers, but since I literally emptied every bin either on the table or carefully on the fabric to which it belongs, I’m fucked on knowing where I’m at. Not halfway yet, that’s for sure…maybe after I get the flesh done. It doesn’t really matter, because I have time to finish it now.

This is the morning breakfast lineup…three dog butts in a row.

Then everybody goes back outside to pee. Or bark. Whichever floats their boat.

Survival mode, people. I woke up panicking about something that needed to be done, but I’ve completely forgotten what it was. It’s probably better that way. I had called my insurance people back because I tried to talk to them back in March or April about something, and they got me some information, but not all of it. So they keep calling back during the day and leaving messages about scheduling time to talk to the agent, and I finally called back, and I’m sure they think I’m nuts, but every other teacher out there gets it, because I’m like I can’t handle this right now, there’s not enough brain power to manage this shit on top of all the other shit can you just leave me alone until the week of the 18th dammit because I had to really push just to make this phone call fit into the crazy that is my everyday life right now? They were like, yeah, sure, but you could hear in their voices that they totally don’t get it. Oh well. Join the vet and the doctor and everyone else who wants something out of me right now. I’LL FUCKING GET TO IT. Just not today.

Girlchild is alive. I need her to tell me where to buy knives to replace the ones I gave her back. No word from the boychild. If you see him, tell him to text his mom. She worries.