When I first sat down at the computer this morning, feet freezing off (really should remember socks or slippers in the morning), nice hot cup of tea, stomach grumbling about everything, I thought I had done nothing yesterday. NOTHING. Because I had no pictures, for one, but because I also remember falling asleep on the couch, curled up next to the cat, who was also curled up asleep. Apparently that was cute. There’s photographic evidence (you won’t see it here). And then getting up and going to bed.

That was at almost midnight though.

Then I thought, well you didn’t get any art done last night. And that’s not true. I came home and got my clothes on for the gym, but the girlchild was still here, and she won’t be here much longer, plus the dog needed her meds and I didn’t want to feed her dinner early, so I didn’t even leave for the gym until 6:30 PM or so. And then came home and made dinner and read my book even more (it’s good…what can I say?) and THEN eventually fell asleep on the couch. 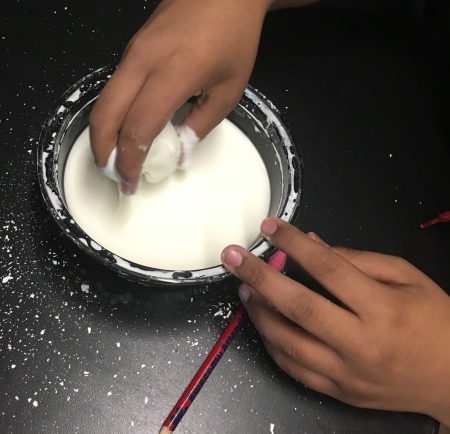 So no PHYSICAL art…but being an artist who shows her work means you have to do paperwork and computer stuff, so I did do that. I entered a show that I probably won’t get into (that’s OK…it happens all the time). I organized my calendar and my piles of paper related to that, so that all the rejections go into the huge pile over THERE, and all the shows I’ve been in where the quilts are back here go in a smaller pile over THERE (who am I kidding…they’re all in one big confused pile), and then I have a smaller, more organized pile of stuff that’s upcoming and stuff that’s out. And then I could see deadlines…deadlines I’d forgotten about. Hmmm. Some of them are calling to me (it’s OK, most of them are for the fall…there’s time). So I did all that management stuff.

And then I came up with an idea for my Women’s March poster…because I’m doing that tomorrow morning…but I didn’t actually DO it. That’s also OK. I can do it tonight. It won’t take long. Although I asked my dad for a stick, and it hasn’t appeared. Huh. Hmm.

Anyway, so it was a semi-productive day. Saturday will inevitably be very unproductive. At some point, I will have to stop being so tired and nonfunctional and get my act together. Maybe. I mean, you can’t make me. (Stubborn much?)

Meanwhile…I did have pictures from yesterday. We made Oobleck for our classes yesterday and then made them explore it (OK, not much forcing of touching the gooey stuff needed to happen)…and then explain what state of matter it was. Yeah. That was good. Messy, yes; exhausting, yes. But good. I’m kinda getting used to this teaching chemistry stuff…although we put a project into the chemistry unit that has life science in it…because we miss it. It’s relevant too. So there.