OK. I’m working on daily to-do lists at the moment. Yesterday’s started with 6 things on it; I ended up crossing off 8 (yes, that’s more than 6, why do you ask?) and transferring 3 to today’s list. Today’s list is starting with 7 things. Hopefully those won’t grow.

Stitchdown took a total of 7 1/2 hours, but I finished…with a lot of furry Not-helpers…

Jockeying for the ultimate cat sleeping spot. He stirred occasionally when I would move the quilt around, but mostly didn’t care that his bed was disturbed AND vibrating.

All stitched down. I think. Because I missed the spaceship AND the moon at one point.

Then I had to go buy batting, wash it, and dry it…before I could pinbaste. So I did some other stuff while I was waiting…like two nights’ worth on this…bottom right, filling in space. 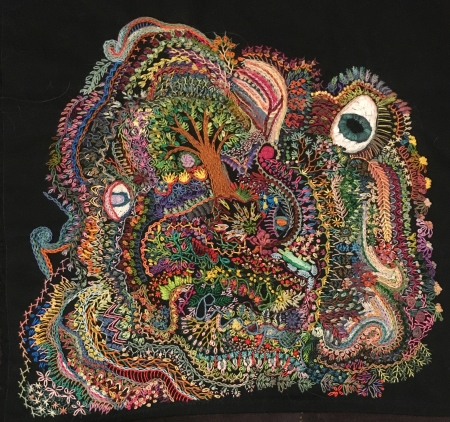 Then because I was waiting for the boychild to finish making dinner (that was awesome cool, by the way)…I pulled this out. This is Sue Spargo’s 2014 Block of the Month, and yes, it takes me forever to do these, but it’s good to have something to stitch on at meetings and soccer games and all that. Seriously, I think this whole quilt came together on the soccer fields…

I just need to stitch on 96 balls and then embellish them and I’m done. With the top. 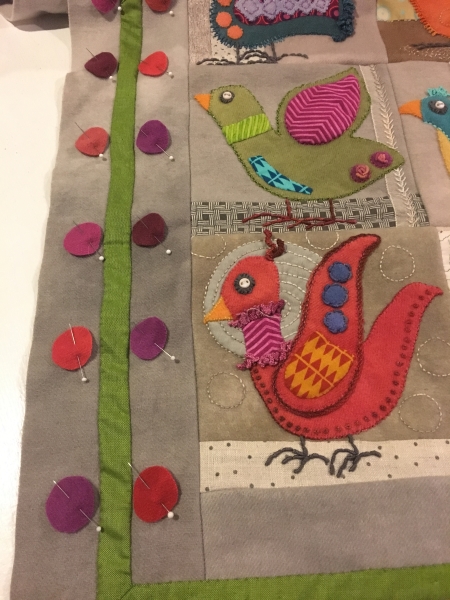 When I put it that way, it sounds like a bit much. Yes, it’s taken me a year to get to this point. You’re right. I’m OK with that. I have the one from the year before that is pinbasted and sitting in the pile with two others to be quilted. I should do that sometime. I think it’s less about finishing these and more about having something in my hands to work on…which is fine.

And then I pieced the back…yes, with the most non-matchy fabrics I could find. I needed 4 yards. I wasn’t buying 4 yards. I had two yards of the leaves, another yard and a half of the green and red stripe, plus some purple to fill in. It’s OK. 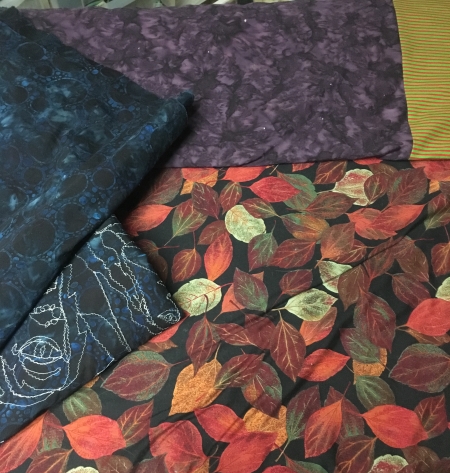 It’s the back. I don’t care. If you do, then insert some rant about how women don’t really fit in, we have to be a little bit of everything, even when it doesn’t make sense.

This morning? Blood tests I didn’t even know I needed (doctor’s office still hasn’t answered me about that), take down of a show I was actually in, and then back here to pinbaste. Why didn’t I do it last night? It was on my Monday to-do list. Because once I got the backing pieced and ironed, it was 11:15. So I didn’t want to stay up another hour and a half when I knew I had to get up relatively early today to get stabbed. I think I’m OK on time…I’m figuring 20 hours for the quilting and another 6 or 7 for the binding. I need to remember to buy binding fabric on Friday. Because Saturday will be crazy. Well. Friday might be too…certainly JoAnns was hellish yesterday. Whatever. I got 50% off my batting. My depression-era grandma would be proud.

OK, making the tea I can’t drink until after the prod and poke. Then off to do stuff so I can come back and do more stuff.

Oh yeah, and I graded one of the six assignments. Five to go.

*Sister Hazel, All for You