You know, I make quilts about some controversial topics sometimes…or at least topics that challenge some. Sometimes they’re easy to make, and sometimes they’re just really hard…they’re too personal, hit too close to home. This is my 15th year teaching, and I’ve had two students die (that I know of), one of lupus and associated damage, and one from a stupid accident that proves you should wear your helmet AND actually strap it onto your head. I’m sure there have been other deaths…a casual estimate based on how many kids probably go through my classroom each year puts me at about 3000 students over the years. I don’t remember all their names or faces or even how well they did in my class (probably better that way for some of them)…but I still care about most of them. I’ve had a couple who were probably borderline psychoses of some sort that made them more than a bit unlikable, and because of the populations I teach, there’s a couple I would slot into future (well, current) offenders of the #MeToo variety…or worse. You know when I have to report a 13- or 14-year-old former student to their current principal for sexual harassment…that kid probably isn’t going to get the help they need to figure out why girls don’t like his shit. Unfortunately I can’t fix them all. Honestly, I can’t fix any of them. I just give them a tiny piece of my empathy (when I can) and some bits of knowledge about how things work and hopefully insight into how to think a bit more critically than they did before. And then they move on.

Why so philosophical? Not Winter Break…not the upcoming new year…a gang-related stabbing in the park next to our school Tuesday night. Former students. One dead, one apparently in critical condition. It doesn’t matter if they were good kids or annoying as hell in 7th grade. It doesn’t matter if they got good grades or blew off everything, or somewhere in between, like most of them. None of it matters except that some mom or dad or other family member is sitting in the hospital with one, and some mom or dad or other family member is sitting at home without ever being able to see the other kid again. Because of territories and maybe (probably) drugs and a whole bunch of other stupid shit that doesn’t save the world or care for a child or cure cancer or just clean up a piece of the world that needs it. There are so many better things to do in our world than this competitive stupid shit. I hurt for their families. I hurt for their own potential…to be good people who care about other people, to maybe be an awesome dad or a cool baseball coach or an amazing musician or whatever they had in them to be. Hopefully the one who is in the hospital will get it and get out. Meanwhile, because of possible retaliation, we have to shut down our after-school programs so that our kids are safe going home. Mourn the dead, but feel anger toward them as well…although the teenaged brain is not fully developed yet. Know that when I look around my classroom, these are those kids. Some of mine will grow up and do the same thing, and there isn’t much I can do about that except provide empathy and teach them some tiny bits about how things work and how to think and tell them I hope they make better choices so I’m not sitting here 5 years from now, staring at their 7th-grade classroom picture, all full of uncertainty and attitude at the same time, wondering what they could have been if gangs weren’t a part of what was known, expected, family, excitement, danger, a way out of whatever crazy they were in, but finally just plain stupidity.

So that’s where I was at last night. And this morning, still there. Going to go to school and process all of that with my kids. The ones who will make these choices…or already have.

I got the boychild’s room ready. He comes home tonight (hopefully…snow and ice may cause issues, as always)…Simba was prepping his favorite sleeping spot in his room…

The girlchild luckily doesn’t come home until the 23rd, so I have time to deal with this.

And then ironing. I cut out the pieces from last night. Kitten actually ventured out again to help. I’m glad to see her in her regular spaces, despite Satchemo’s attempts to scare her away. I miss her. 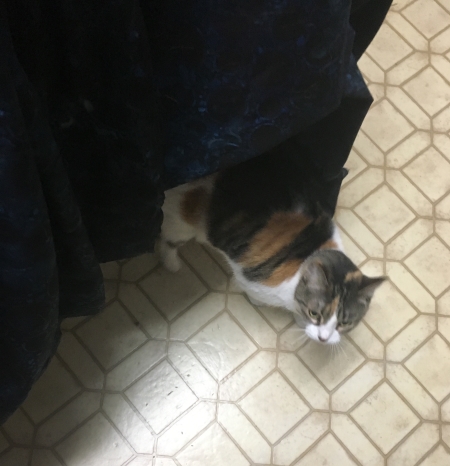 Ah. Yes. I’m relieved by this. It makes sense now. I did have to fix those spaces. 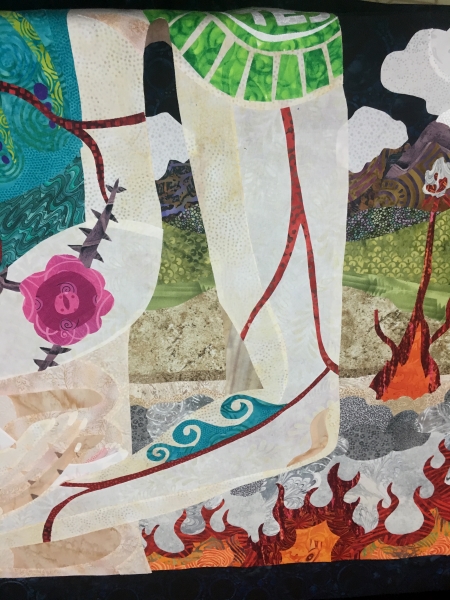 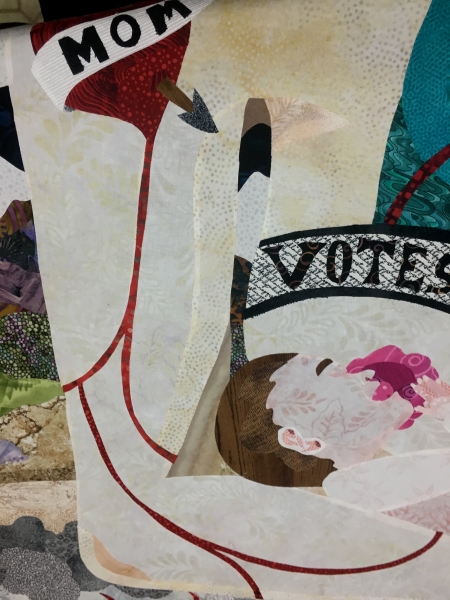 Yes, I’m the only person who will really notice. What’s new? There’s something else in here somewhere where two pieces next to each other are the same fabric. They shouldn’t be. Oh well! Not sure I could find that one again if I tried.

So I added the cats on either side…not ironed down yet until I get the head(s) on there. 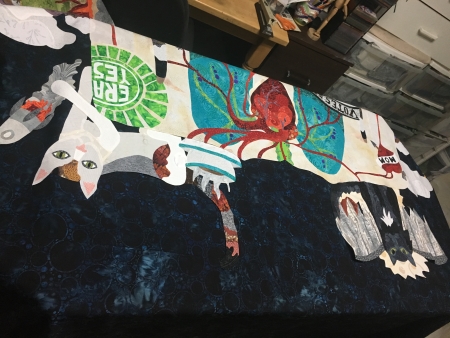 Got the head in the right place, ironed neck, chin, cats in place.

The first iron doesn’t hold everything down. I have to go back and iron with steam, 30 seconds on each section. Right now, I’m just basting it with a bit of heat. Arms and heads…

Still got a Kitten. Man, she’s fat at the moment. 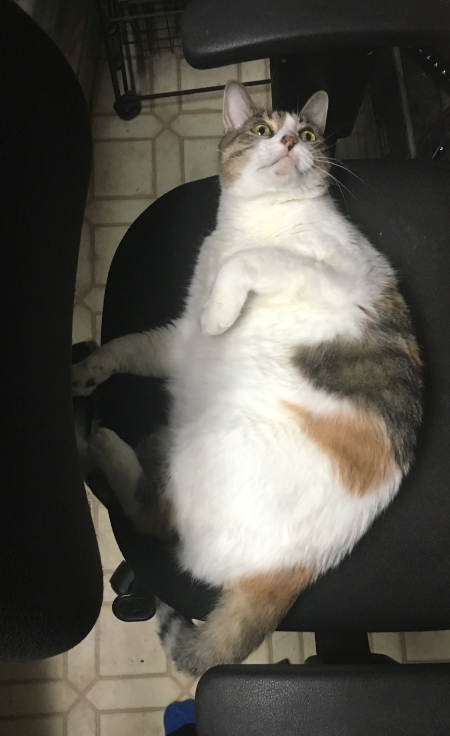 She used to be tiny. Not so much any more. Old age. 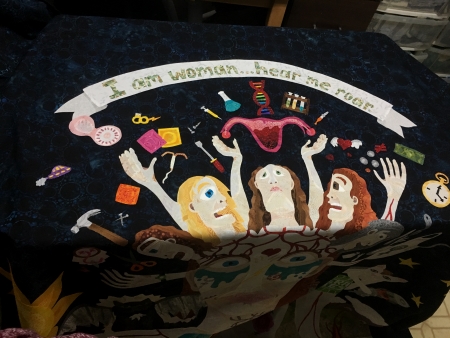 And the whole thing ironed together, too big to even get in there. But she’s good. I like her. She turned out well. 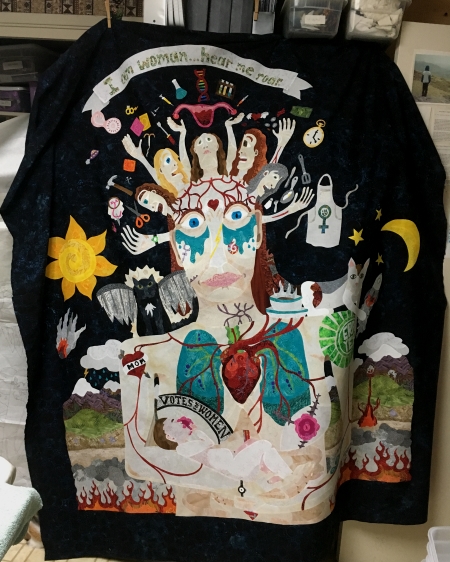 Of course, now I need to do stitch down and pinbaste and quilt and bind. In about 13 days. OK. Yeah. I can do that. I can. (This is what vacation looks like.)

So there are good things mixed in amongst the bad. Like always. We need more good. Although there may be a gang-related quilt in my future.

2 thoughts on “You Know It’s Gonna Be Alright*”