So I spent a couple hours last night worrying about the girlchild, who was on lockdown in a dorm where a robbery took place at gunpoint. Because we need guns for protection, right? Because if anyone else in that dorm had possessed a gun, a whole lot of people would be injured or dead right now. As it is, everyone was fine, although I think both girlchild and I (and quite a few other parents and students) had the shakes for a while. But please don’t ever say to me that you have a right to carry a gun. Nope. You don’t. Not unless you’re a cop…and even then, I have misgivings because so many of our cops are racist and/or reactionary.

I did some lazy daisies on the right that look like bull heads. 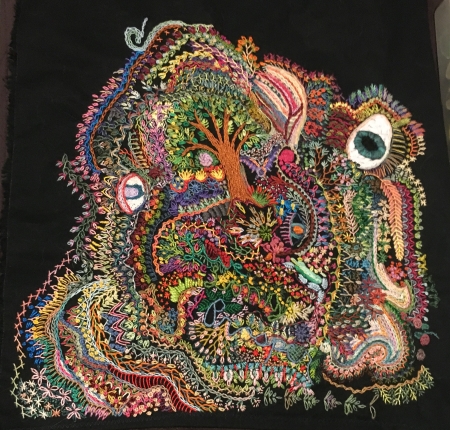 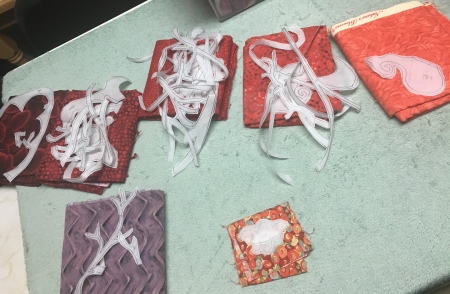 And the pile of fabrics I went through last night…another 3 hours or so yesterday. 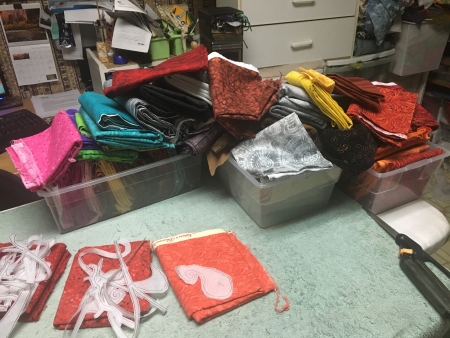 I’m up to 13 hours in the ironing…with about 400 pieces to go, I figure. It’s not been quick, that’s for sure. Here’s just one of the reds in the heart/arteries section… 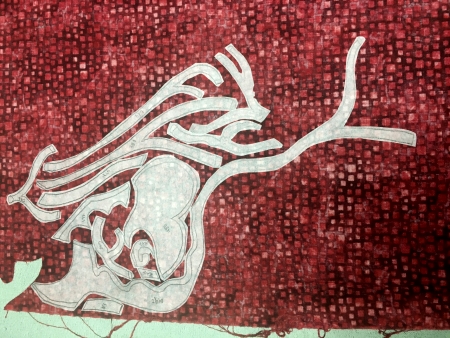 Lots of pieces ready to be cut out. 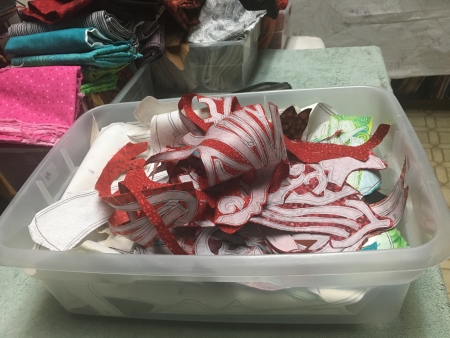 And all the fabrics I’ve used so far…

I’ve been working to 1 AM and then falling into bed exhausted. The nighttime hours are better for this, I find. I did copyedit during the day yesterday…more of that today. I haven’t graded any assignments since Sunday, and I need to do some of that too. So I’m probably not going to finish the ironing today…can’t really blow off the moneymaking part of my week yet. I need to get significantly further along. I do have most of today (I’m hiking tonight), all of tomorrow, a few hours on Thanksgiving (mostly nighttime probably), and all of Friday. But I’m realizing it’s never enough. This quilt has to be done and photographed in less than 40 days. I can do that…but the copyediting has to be done in less time than that, and I have to deal with school. I can’t just push that off. Where do the hours go? Staring at fabric, I think. Mostly. And dealing with dogs. Stupid stuff like eating and peeing. I made lasagne from scratch yesterday…but that’s 3 more dinners on top of last night’s. So that was a good thing.

Sitting here watching a hummingbird on the flowers outside my office window…supposed to be in the 90s today. November, my ass.

OK, so shower, eat, copyedit. Consider venturing out for the chicken broth I should’ve bought on Sunday for the turkey I’m making for myself. Gotta make some rolls too. Should do that tomorrow…

Now get up and go.

My sewing machine is having issues. So is this chair.
Working on some lines. Get them out of my head and on the paper. #drawing