So grades are due in about a week and a bit. Again. End of the trimester though, so higher stakes. This means I have been grading a lot of stuff. The best line from what I was grading this weekend so far: “Everybody liked him, girls were dying on him, but he did not like any of them. They were all ugly and they did not look cool.” In case you were wondering, he’s writing about his Element Superhero. I don’t remember what element it was, but this was what he cared about in the story he wrote.

I did spend time at the San Diego Museum of Art (the Monets are there!) and the Mingei Museum yesterday with my stitching friends. We attempt these outings occasionally to get together outside of our monthly stitching meetings…and it was good. I have way more pictures than this…I may post more later this week.

This was a montage of some of the really amazing kantha stitching at the Mingei right now. The woman on the left is giving birth…her waters are breaking. And that’s a tiger on the bottom right. Don’t question the spots. He’s a fucking tiger.

This is a children’s exhibit of Frida Kahlo at SDMA…there was more, but I liked the monkey on the wall. down low where the 2-year-olds could see it.

At the Mingei…my camel is obviously underdressed compared to this one.

And Arline Fisch’s wire flowers hanging from the ceiling.

Then I came home and graded for over 4 hours. Seriously. I did. The plus is I’m almost done grading that assignment from hell. It was great for the kids, great for a learning opportunity, but I basically had to memorize 55 elements and their physical and chemical properties to be able to grade it well. I know more now than I used to. That might be a good thing.

Then I headed out for my regular session of Draws-in-Bars, where I watch that band do their thing and try not to get annoyed by some of the other patrons. Which was harder last night, but eventually got better.

I did this one before dinner arrived…in the mood for Halloween? Might as well start with a skelly.

And then this one. I really like her facial expression. Those are really hard. And another skelly. 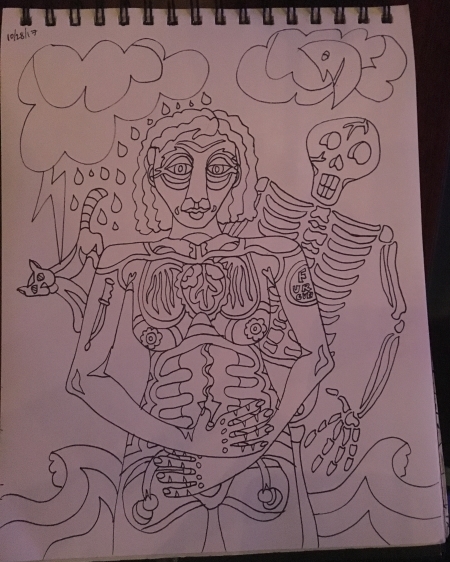 Anyway. Not a solution to the current drawing issue yet, but it was relaxing. And yes, eventually I put all that away and I danced to the music. Of course, I can’t breathe this morning…not sure if I’m STILL sick or if I’m getting sick again. I’m going for still being in recovery.

I came home and did two nights’ worth on the right…more filler in that cretan stitch. 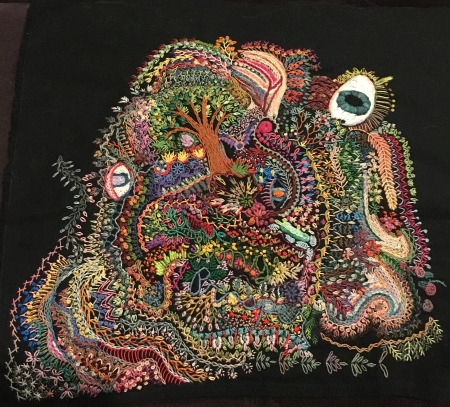 A little bit of relaxation, some fun, some educational stuff, some work, some dishwashing happened and a little tiny bit of laundry. Today will be more of the work stuff and less of the fun and relaxation, but that’s always what Sundays look like for teachers. You gotta catch up with everything someday. Well. That’s a joke. I never catch up.

*The Postal Service, Such Great Heights