Still sick…although functional. We’ll see how functional after I have to talk all day, right? And stand up for hours. Sick days are a joke. We had 3 teachers out on Friday and only one sub showed up. That’s our reality…and teaching science means even less of a chance they’ll show. I can let it be chaos in the classroom and have the kids get nothing done, or I can push on through. I think I’m better anyway…not well, just better. That’s a plus.

More stitching on the right side…realizing in two months, it will be done, so what shape do I want? I don’t think it will be square, filling the whole thing. That’s a consideration. 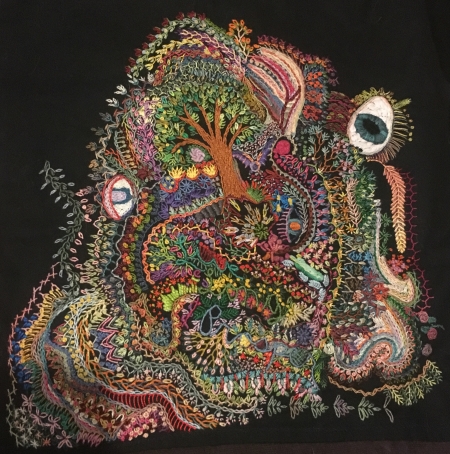 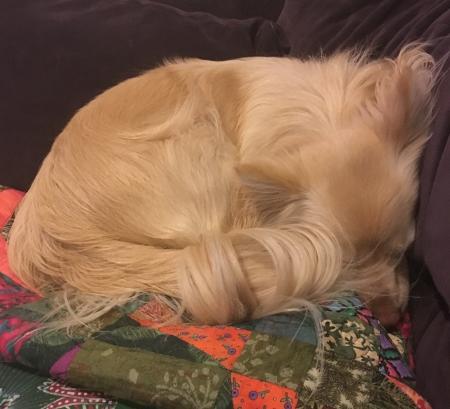 I made it into the studio for a little while yesterday, just over an hour. My parents’ dog Katie was in there too. Or is it Katey? I’m never sure. With dog names, you can never tell…my daughter’s dog is Calli, not Cali, because it’s short for Calliope, not California.

Too much information. Here’s the fabrics I’ve used so far… 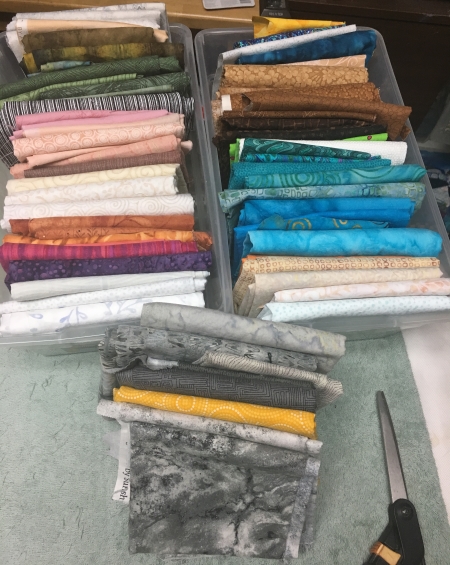 Not as colorful as I originally planned…it will be lots of blue in the end. Blue on blue with a hint of blue.

Here’s the pile so far.

I’m actually almost done…could easily finish tonight…so I probably will, depending on how I feel. I did get the OK to change my focus for the next quilt, so drawing that is on my list for the week…gotta get going on that one. I have a fairly free week coming up, although grading is a priority. I did a lot of that over the weekend too, although never enough. Gotta get my focus on. It helps to be well, doesn’t it? I think it might. I think I’ll try that later this week…

*Natalie Merchant, I May Know the Word